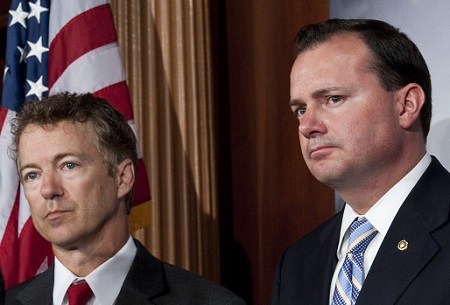 WASHINGTON, D.C. — Republican Senators Mike Lee (R-UT) and Rand Paul (R-KY) ripped the Trump administration over a closed-door briefing on Iran on Wednesday, announcing they will now support a resolution attempting to rein in the president’s use of military powers.

Lee called it “the worst briefing I’ve ever seen, at least on a military issue,” according to a report from The Hill.

Defense Secretary Mark Esper, Secretary of State Mike Pompeo, CIA Director Gina Haspel and Joint Chiefs of Staff Chairman Mark Milley were all dispatched to brief the House and Senate on Wednesday after days of concerns from lawmakers that Trump was on a path to war with Iran.

On Tuesday night, U.S. troops were the target of missile attacks launched at American bases in Iraq. No American or Iraqi troops were injured in the attacks, which took place on the Al Asad and Erbil bases.

He also said he planned to have a “conversation” with Trump about the remarks.

“I find that absolutely insane,” he added. “I think that’s unacceptable.”

Paul called the briefing “less than satisfying” and took a shot at the administration over its use of a 2002 war authorization as the basis for last week’s airstrike that killed Iranian General Qassem Soleimani.

“I see no way in the world you could logically argue that an authorization to have war with Saddam Hussein has anything to with having war with people currently in Iraq,” Paul told reporters.