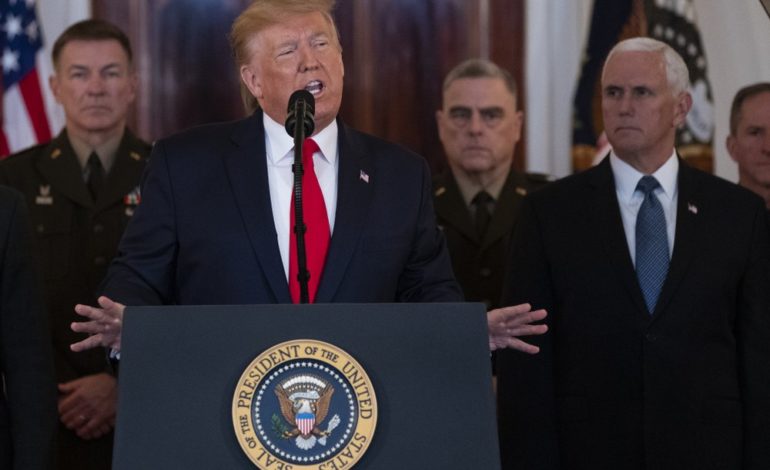 President Trump addresses the nation on Wednesday at the White House on the ongoing conflict with Iran while Chairman of the Joint Chiefs of Staff Gen. Mark Milley (to Trump's right) and Vice President Mike Pence and other officials look on. Trump's speech seems to indicate that Iran is stepping back from further military responses after its early Wednesday morning missile strike against two bases in Iraq that hold U.S. troops. Photo: Evan Vucci/AP

WASHINGTON, D.C. – At the White House on Wednesday, President Trump seemed to simmer down days of heated rhetoric and said the U.S. would not respond to early morning missile attacks on Iraqi bases housing U.S. troops with military force.

Early Wednesday, both Iranian authorities and U.S officials confirmed Tehran launched a series of surface-to-surface missiles at key bases that held U.S. and coalition-led forces. Eleven of these missiles hit the Ain al-Asad air base in Iraq’s western Anbar province and one targeted a base in Irbil in Iraq’s semi-autonomous Kurdish region. Four failed to detonate according to both General Mark Milley, chairman of the Joint Chiefs of Staff, and Defense Secretary Mark Esper.

“We suffered no casualties,” Trump said, speaking at the White House and flanked by Vice President Pence and military brass. “All of our soldiers are safe and only minimal damage was sustained at our military bases.”

On Wednesday, after Iran’s military strike, the Pentagon said that Iran launched its missiles with intent to kill. Even so, Trump said that Iran seemed to be backing off its earlier promises of escalation and appeared to be standing down, “which is a good thing for all parties concerned and a very good thing for the world.”

Trump chose instead to extend his administration earlier policy of punishing Iran economically, promising to maximize pressure on Iran through unspecified sanctions which would remain in place until Iran changed its behavior in the region.

Both Milley and Esper have warned against the presumption that this means an end to tensions between Iran and the U.S. in the region. Milley said it was too early to tell whether Iran would be satisfied with the missile strike as a response to the killing of IRGC General Qassem Soleimani. Indeed, Iran’s Supreme Leader Ayatollah Ali Khamenei said the early Wednesday morning missile strikes did mean a complete end to retaliation.

“Last night they received a slap,” he said. “These military actions are not sufficient (for revenge). What is important is that the corrupt presence of America in this region comes to an end.”

Trump pointed to the U.S. military’s advanced armament and strike capabilities, boasting of missiles that were, “big, powerful, accurate, lethal and fast.” He did offer, however, that the U.S. did not want to use these missiles and that the country was ready to make peace with all those who seek it.

In a conciliatory move, Trump called on NATO to become further involved in the Middle East process. Trump has previously bashed NATO countries by claiming they contribute disproportionately less in military spending than the U.S. and has gone as far as to say the organization is obsolete.

News of deescalation may come as a relief to many, though the U.S. seems poised to maintain its power and influence in the region and continue to its political and military strategies as part of a global effort to maintain its hold on the world’s affairs. Even after Iraq’s parliament voted to expel the U.S. from its borders, Trump said he had no immediate intention of pulling U.S. troops.