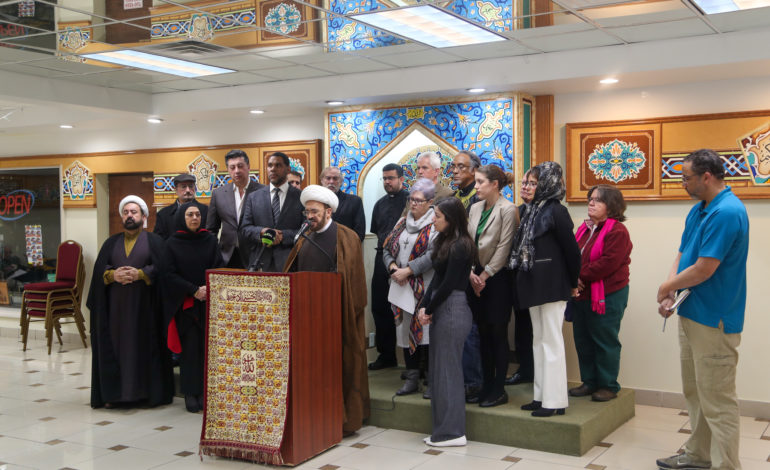 Imam Mohammad Ali Elahi speaks at a Thursday press conference at the Islamic House of Wisdom in Dearborn Heights along with others from an inter-faith and multi-ethnic group of those concerned about recent dangerous escalations towards war with Iran. - Photos by Imad Mohamad/The Arab American News

DEARBORN HEIGHTS — Faith leaders from across Metro Detroit gathered Thursday in the Islamic House of Wisdom to call for calm in the face of escalating tensions between Iran and the United States following a drone attack that killed an Iranian general and a missile attack on an Iraqi air base housing American troops. The Christian and Muslim clerics are praying for a diplomatic solution that will prevent further bloodshed.

“Diplomacy and dialogue was working with Iran,” said Imam Mohammed Ali Elahi, whose mosque hosted the event. “Nuclear negotiations united America and the world’s biggest powers and promised peace in the region. But out of a dislike for President Obama, Trump withdrew from the treaty, violating an international agreement.”

Afterwards, the Trump administration re-imposed sanctions on Iran, but failed to bring the Iranians back to the negotiating table. It wasn’t until after his impeachment for abuse of power and obstruction of justice that Trump abruptly ordered the attack that killed Iranian general Qasem Soleimani without informing Congress nor any American allies in the region. The Trump administration claims it was to prevent an imminent attack, but has yet to disclose any details of the threat.

Dawud Walid, executive director of the Council on American Islamic Relations of Michigan (CAIR-MI), spoke of new threats to immigrants and U.S. citizens who are finding themselves under extraordinary scrutiny entering the country in the wake of developments in the Middle East.

“We are concerned that the escalated tensions between America and Iran has given federal enforcement officers the excuse to ramp up ethnic and religious profiling of Iranian Americans and American Muslims who have recently traveled to Iran,” he said. “The invasive questioning of American citizens while reentering their own country without evidence of potential criminal activity should never be acceptable under any circumstances.”

Most of the people who are in Congress today are the same people who voted for the Iraq war. What we see in the media are the same lies, the same innuendo that took us to war with Iraq – Nasser Beydoun, chair of the Arab American Civil Rights League

Nasser Beydoun, chair of the Arab American Civil Rights League, spoke of the direct link between Middle East affairs and the state of civil rights for Americans and the U.S. policy in the Middle East as a strengthening of the interests of the military-industrial complex.

“Since 9/11, we have seen it play out over and over again in this country,” he said. “Issues over there affect us here.

“They affect civil rights, affect reasons for discrimination against the community and we as a nation cannot rely on our government in Washington to keep us out of war. Most of the people who are in Congress today are the same people who voted for the Iraq war. What we see in the media are the same lies, the same innuendo that took us to war with Iraq.”

The Arab American News Publisher Osama Siblani echoed these concerns in his comments and criticized Democrats for doing their part in maintaining American power in the Middle East, no matter the cost. He also spoke of the overwhelming cost to the U.S. for maintaining military bases in the region, money that could spent in building infrastructure in countries decimated by U.S. wars.

“It’s not about General Soleimani’s assassination,” he said. “It’s about the credibility of this country and where this president is leading the world today.

“The American people are being asked to reach into their empty pockets, to pay to build schools for their kids, while we spend trillions of dollars on weapons of mass destruction. This is what is important today. This president will take us to war to gain another term in the White House. This president is not only going to war with Iranians and Iraqis, he is going to war with Americans.”

Shireen Smalley of the National Iranian American Council spoke on behalf of Iranian Americans who remain afraid for their friends and loved ones in Iran. She also spoke to the need for holding the Trump administration responsible for the crisis.

“In just three or four short years, President Trump has withdrawn from the JCPOA (Joint Comprehensive Plan of Action or Iran Nuclear Deal), the best hope for diplomacy between our two countries,” she said.

“War is incompatible with Christian teaching,” said Rev. Jill Hardt-Zundel, pastor of Central United Methodist Church of Detroit. “If we are to live into our mission of transforming the world, we must prioritize collaboration among nations, work to reduce the use and need for weapons and foster just, equitable and durable solutions to the root causes of conflict.”

Erik Shelley of Michigan United in Detroit contributed to this article.