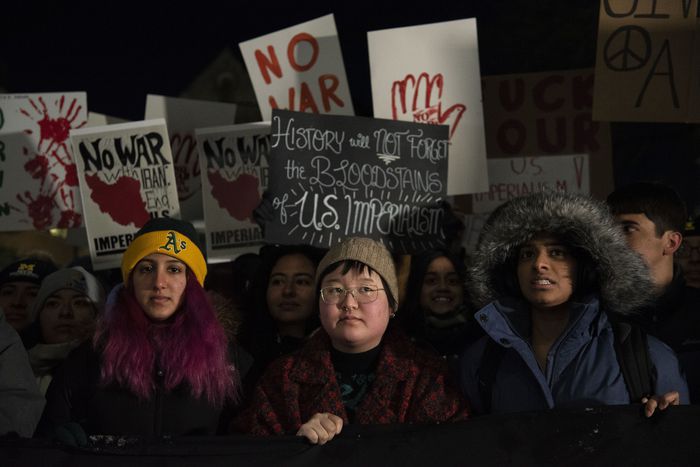 Protesters at the rally in Ann Arbor. Photo via Jenna Kieser/Mlive.com.

ANN ARBOR — Hundreds of students and peace advocates attended an anti-war rally on the campus of the University of Michigan Wednesday night, reacting to a U.S. military strike that killed Iranian general Qassem Soleimani.

Juan Cole, a well known professor and blogger specializing in Middle East history, called the targeting of Soleimani an unnecessary act of war.

“To be against war with Iran does not mean being pro-regime,” Cole said according to a report from MichiganRadio.org. “It doesn’t mean we approve of the government of Iran.”

Despite freezing temperatures, more than 200 protesters showed up, condemning U.S. military action. Dubbed the “No War with Iran” protest, it took place on the steps of Angell Hall on campus.

“Imperialism is the core issue here,” said protester Zaynab Elkolaly, an organizer and member of Ann Arbor’s police oversight commission, according to a report from Mlive.com. “This is not a partisan issue…It’s being present in another country to exploit their resources and to harm the people there, destabilize them for (American) interests.”

Student Shelby Christensen said she came out mainly to learn about the history of U.S. intervention in Iran, Iraq and the Middle East. Others said the threat of war with Iran led them to attend the rally.

Hours after the killing of Soleimani, the term “World War 3” began trending on Twitter, although such fears eventually cooled down as several major media outlets cautioned social media users.

“This is pretty awful what we’re doing,” Christensen said. “It’s not what I like to see, and it’s not what anybody here likes to see.”

A small counter-group of protesters also rallied in support of the U.S. military strike, Mlive.com reported.

“My family is Sunni Muslim from northern Syria from the Idlib province, which is currently under siege by Iranian and Russian forces,” said Kareem Rifai, founder of the group People Against Authoritarianism, Dictatorship and Oppression, who blamed the general for the killing of relatives in Syria.

“Soleimani was part of the team of military generals that ordered the bombing that killed multiple members of my family.”

United States leaders have said that Soleimani was responsible for the deaths of 603 U.S. service members in Iraq, in addition to thousands of others in the region.

Signs at the rally called for avoiding war with Iran, while others supported the upcoming impeachment proceedings against president Trump.

Esper was vice president of government relations at the Raytheon Corporation, a top defense contractor, from 2010-2017 before serving as secretary of the Army, while Pompeo is the former president of Sentry International, an oilfield equipment manufacturer.