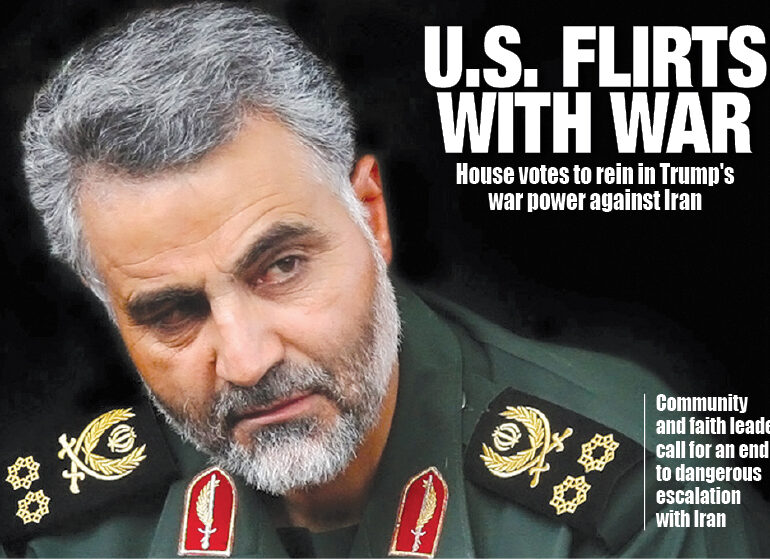 The world has been in the grips of an uncertain fear since it woke up to news of the Jan. 2 assassination of a top Iranian general at the hands of the U.S.. Images from recent memory of endless, expensive and insane military ventures in the Middle East became vivid once more as Tehran promised revenge and President Trump goaded the nation of 81 million Iranians, not to mention his own nation, towards the brink of war in the subsequent days.

A lot has occurred in this last week and to bring a perspective to what has occurred, we include here a recap of major events. There are, of course, numerous geopolitical complexities that have brought the world to this point. This summary of last week’s events is a snapshot of an ongoing and highly problematic U.S. foreign policy program in the Middle East that has left millions dead, destabilized nations, brought in the influence of radical factions that have committed further crimes against humanity, all in the name of strengthening the U.S.’ imperial hold on the world.

The assassination of Iranian General Qassem Soleimani in Baghdad

In a turn of events that had an eerie parallel with the 1914 assassination of Archduke Franz Ferdinand in Sarajevo that brought the world to war, the world woke up to news of the “targeted killing” of the 62-year-old General Qassem Soleimani, commander of Iran’s elite Quds Force. The drone killing was reminiscent of a broad strategy used by both Israel and the United States under the Obama administration to take out foes in individually targeted assassinations, often with the use of drones.

Officials from Iraq’s Popular Mobilization Forces said Soleimani was killed as he left his plane to join al-Muhandis and others in a car. His body was identified by a ring he wore. Trump tweeted an American flag while on vacation on his estate in Palm Beach, while the American people and the world prepared itself for another senseless military disaster that would affect generations to come.

Trump’s allies in Washington praised the act, while his opponents in the Democrat wing,  hardly strangers to supporting wars, demanded an explanation for this latest move. Democratic presidential candidates criticized this latest strategy, though all were in agreement with the Trump administration of the dangers of Iran, and of Soleimani himself. Candidate Pete Buttigieg said Soleimani “deserved it”, and like many other Democrats, was upset about not being informed of the killing in advance.

Trump alluded to supposed plans Soleimani had for attacking Americans as a justification for the airstrike, though the administration failed to provide any direct evidence of this. When this was not enough to thwart any doubt of the righteousness of American military actions, Trump, his allies and the Democrats all painted Soleimani as a figure with the blood of millions on his hands.

Soleimani was a popular figure in Iran. According to the Associated Press, he was relatively unknown in Iran until the 2003 U.S. invasion of Iraq, Soleimani’s popularity and mystique grew after American officials called for his killing. A decade and a half later, Soleimani had become Iran’s most recognizable battlefield commander, ignoring calls to enter politics but growing as powerful, if not more so, than its civilian leadership. Soleimani prays in a religious ceremony at a mosque in the residence of Supreme Leader Ayatollah Ali Khamenei in Tehran. Photo: Office of the Iranian Supreme Leader

He took control of Iran’s Revolutionary Guard’s elite Quds Force after surviving his country’s long war with Iraq in the 1980s. He came under U.S. attention following the 2003 invasion of Iraq. The U.S. blamed Iran for starting proxy wars in the region and Soleimani’s Quds forces for training and enabling bomb makers in Iraq, which Iran has denied. Nevertheless, Soleimani’s assault on ISIS, as well as this negative attention from the U.S, made him a powerful and beloved figure in Iran.

Over the weekend after Soleimani’s death, speculations as to how Iran would respond abounded. Iranian officials maintained that the country was not afraid of a military conflict, vowing to exact revenge in one way or another. The fate of the world, at the turn of the decade, hung in the balance as news media sought frantically to understand how the conflict might play out.

In Tehran on Monday, throngs of Iranians mourned the death of a beloved leader.

Aerial views and independent reports on the ground told of a vast procession of mourners, a mass that stretched out as far as the eye could see. A million people crowded the streets of the nation’s capital, according to one estimate.

The only thing more palpable than grief were the cries of outrage and retaliation against the slaying of the general, who was close to Iran’s Supreme Leader Ayatollah Ali Khamenei. Footage of Khamenei leading a prayer over the caskets of Soleimani and others killed in the strike showed the religious leader openly weeping while delivering the prayers. The scene played out in the same mosque where prayers were said over the body of Islamic Republic founder Ayatollah Ruhollah Khomeini, after his death in 1989. That ceremony paled in comparison to the crowds Soleimani’s killing brought out in different cities. Soleimani’s remains were later transported to the holy city of Qom, where another massive crowd broke out. In Tehran, Soleimani’s daughter Zeinab openly called for revenge and called President Trump “crazy.”

“The families of the American soldiers … will spend their days waiting for the death of their children,” she told the adoring crowd.

The cries of retaliation mirrored the latest warnings from Iranian officials and other leaders in the Middle East about the direct impact of the assassination on U.S. soldiers in the region. A day before, Hezbollah leader Sayed Hassan Nasrallah said the U.S. military in the Middle East would pay the price for the assassination of Soleimani, warning that U.S. soldiers and officers would return home in coffins.

Uncertainty loomed as the world waited to see just how these threats of retaliation would materialize. A letter by a top U.S. marine general circulated that seemed to indicate the country would be backing off its military presence in Iraq, in accordance with a weekend Iraqi parliamentary vote recommending the U.S. remove all remaining troops from the country.

However, Washington remains firm to this day that no such decision has been made.

Tensions came to a head on early Wednesday as Iran retaliated by launching a series of surface-to-surface missiles at two Iraqi bases housing U.S. troops. The U.S. acknowledged a dozen missiles were fired at Ain Assad air base in Iraq’s western Anbar province and a base in Irbil in the semiautonomous Kurdish region.

Rumors out of Tehran spoke of 13 possible sets of plans to enact revenge. A stampede broke out on Tuesday at Soleimani’s funeral in his hometown of Kerman, where more than 200 were injured.

“We are warning all American allies, who gave their bases to its terrorist army, that any territory that is the starting point of aggressive acts against Iran will be targeted,” The Guard issued a warning through a statement on Iran’s state-run IRNA news agency.

The U.S. warned of possible attacks on key sites in the region, including trade ways and vital routes for global energy supplies. U.S. embassies were put on high alert and the U.S. military geared up training and deployment, including the deployment of the specialized Army Rangers.

Iran’s parliament passed a bill declaring the U.S. military’s command at the Pentagon and those involved in the targeted killing of Soleimani as “terrorists.” The decision serves as counter to an April declaration by Trump to label the Revolutionary Guard a “terrorist organization.”

At the White House on Wednesday, President Trump seemed to simmer down days of heated rhetoric and said the U.S. would not respond to early morning missile attacks on Iraqi bases housing U.S. troops with military force.

“We suffered no casualties,” Trump said at the White House while flanked by Vice President Pence and military brass. “All of our soldiers are safe and only minimal damage was sustained at our military bases.”

On Wednesday, after Iran’s military strike, the Pentagon said Iran launched its missiles with the intent to kill. Even so, Trump said that Iran seemed to be backing off its earlier promises of escalation and appeared to be standing down, “which is a good thing for all parties concerned and a very good thing for the world.”

Trump chose instead to extend his administration’s earlier policy of punishing Iran economically, promising to maximize pressure on Iran through unspecified sanctions which would remain in place until Iran changed its behavior in the region. Trump addresses the nation on Wednesday

U.S. officials warned against the presumption that this meant an end to tensions between Iran and the U.S. in the region, saying it was too early to tell whether Iran would be satisfied with the missile strike as a response to the killing of Soleimani. Indeed, Iranian Supreme Leader Ayatollah Ali Khamenei said the early Wednesday morning missile strikes did mean a complete end to retaliation.

“Last night they received a slap,” he said. “These military actions are not sufficient (for revenge). What is important is that the corrupt presence of America in this region comes to an end.”

The mysterious crash of a Ukrainian jetliner near Tehran just hours after Iran’s ballistic missile attack on Iraqi bases called in to question whether Iran was involved in the tragic incident.

U.S., Canadian and British officials said on Thursday that it was highly likely Iran accidentally shot down the civilian plane, killing all 176 people on board, including 82 Iranians, at least 63 Canadians and 11 Ukrainians, according to officials. Many of the passengers were believed to be international students attending universities in Canada; they were making their way back to Toronto by way of Kyiv after visiting with family during the winter break.

“We have intelligence from multiple sources, including our allies and our own intelligence,” Canadian Prime Minister Justin Trudeau said in Ottawa. “The evidence indicates that the plane was shot down by an Iranian surface-to-air missile.”

He said the destruction of the plane “may well have been unintentional.”

Other officials from the affected Western countries also said they believed an Iranian missile may have accidentally hit the plane. Iran has ruled out any such explanation and has invited U.S. and Canadian transportation safety boards to join its investigation of the plane crash site.