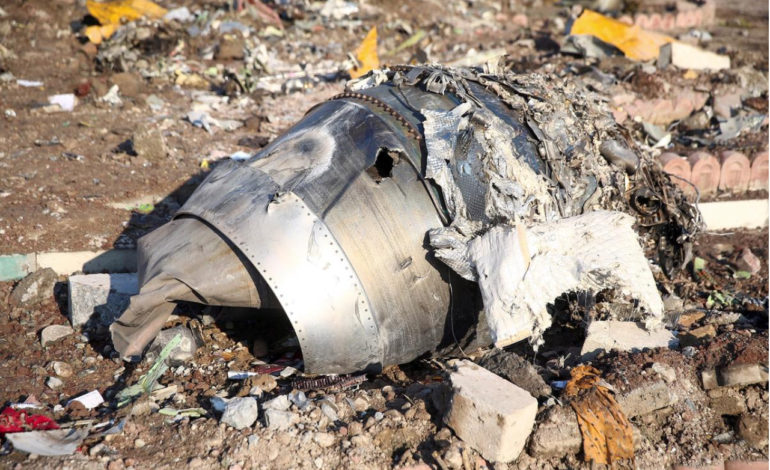 Debris of a plane belonging to Ukraine International Airlines that crashed after taking off from Iran's Imam Khomeini airport is seen on the outskirts of Tehran, Iran, January 8. - Photo Nazanin Tabatabaee/WANA

KIEV — Ukrainian Foreign Minister Vadym Prystaiko said on Friday that Iran was cooperating with an investigation into the crash of a Ukrainian passenger plane, and that Kiev was not ruling out any version yet of what might have happened.

Canada and others have said the plane was brought down by an Iranian missile, probably by mistake. Prystaiko was more guarded and said Ukraine did not want to come to conclusions yet about what caused the crash.

However, the country’s state security chief, Ivan Bakanov, said he was prioritizing two versions of what might have caused the crash — a missile or terrorism.

Prystaiko said the issue of where the black boxes would be analyzed was still being discussed, but that Ukraine wanted this to take place in Kiev.

The Ukraine International Airlines flight to Kiev from Tehran crashed on Wednesday, when Iran was on alert for a possible U.S. military response hours after firing missiles at U.S. targets in Iraq.

Iran denies the Boeing 737-800 was downed by a missile and rejects suggestions the crash site has been cleared by bulldozers. Prystaiko also said he could not confirm evidence of bulldozers being at the site.

He said there were many versions of what could have caused the crash, which killed all 176 people on board.

“We do not reject any of the versions,” Prystaiko said at a televised briefing in Kiev. “We want to establish the truth.

“At the moment, we have no reason to say that the Iranian authorities are not coordinating their activities or are not sufficiently interacting with Ukraine,” he added.

Ukraine has previously said it is looking at various possible causes of the crash, including a possible missile attack, a collision, an engine explosion or terrorism.

Prystaiko said Ukrainian flights to Iran and Iraq were banned until the investigation has been concluded.

He also said the plane had changed course after an incident, but it was hard to say what the reason was.