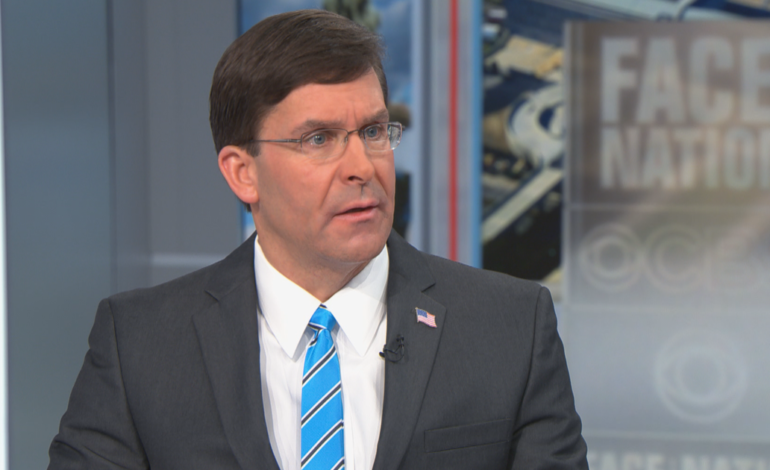 Defense Secretary Mark Esper tells CBS's Face the Nation that he did no see any specific evidence that an attack was underway on four U.S. embassies, on Sunday Jan. 12.

While appearing on CBS’s Face the Nation, Esper clarified Trump’s earlier comments by saying the president was talking of probably additional attacks on U.S. embassies without pointing to one specific piece of evidence. He also admitted that he did not see any specific evidence with regards to the four embassies.

Officials have said in the days ensuing Jan 2 that they have “exquisite intelligence” that a broader attack on multiple U.S. embassies was likely. Trump said on Friday in an interview with Fox News that four embassies would have been attacked before Soleimani was killed.

U.S. Rep. Justin Amash (I-Grand Rapids), a critic of Trump who defected from the Republican Party, responded to Esper’s comments on Twitter on Sunday.

“The administration didn’t present evidence to Congress regarding even one embassy,” he wrote. “The four embassies claim seems to be totally made up. And they have never presented evidence of imminence—a necessary condition to act without congressional approval—with respect to any of this.”

On Jan. 3, Israeli army officers and military and diplomatic analysts alike told U.S. and other media that Israel had advance notice of the U.S. plans to kill Soleimani, apparently a few days before the operation took place.

An Israeli army officer with knowledge of Israeli military assessments, speaking on the condition of anonymity with the Los Angeles Times since he did not have permission to speak to reporters, said that the attack on Soleimani “did not come as a surprise.”