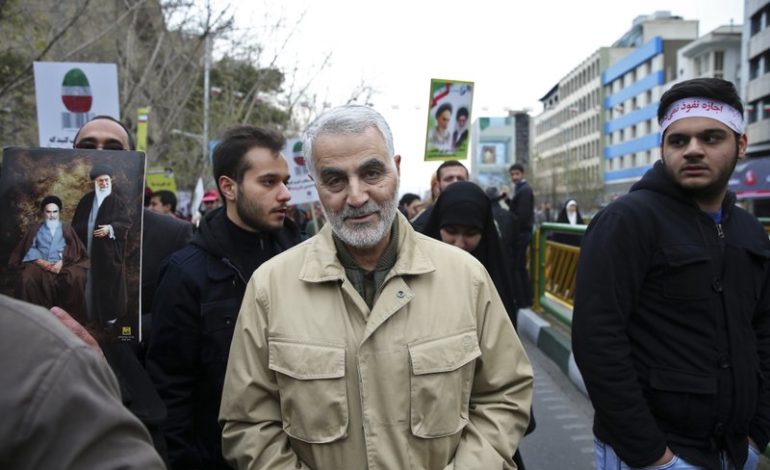 A new report shows how the killing of Islamic Revolutionary Guard General Qassem Soleimani had been laid out as an option for Trump seven months ago. AP file photo

WASHINGTON, D.C — A new report by NBC News claims President Trump authorized the killing of Iranian Revolutionary Guard General Qassem Soleimani seven months ago with the condition that Trump would have final signoff on any specific plans to kill the general. The information was provided by five current and former senior administration officials.

The news is further insight into the decision making that led up to the Jan. 2 assassination of one of Iran’s most prominent leaders. It also further contradicts the White House’s weeks-long explanation that an imminent threat coordinated by Soleimani was under way on four U.S. embassies. Over the weekend, Defense Secretary Mark Ester said he did not see any specific evidence of that plot.

NBC said the decision explains why assassinating Soleimani was on the menu of options the military presented to Trump two weeks ago for responding to an attack by Iranian proxies in Iraq, in which a U.S. contractor was killed and four U.S. service members were wounded, the officials said.

Trump had been given Soleimani’s killing as an option and had been pushed by his security advisors as far back as 2017. Iran hawks like John Bolton and Secretary of State Mike Pompeo had both pushed for an aggressive policy on Iran including designating the entire Islamic Revolutionary Guard Cops as a foreign terrorist organization.

Both Bolton and Pompeo wanted Trump to authorize the assassination last year after Iran shot down a U.S. drone. Trump reportedly rejected the idea, saying that he would only take that step if Iran killed Americans. The NBC report seems to link the assassination with what the U.S. military said were Kataib Hezbollah attacks on an Iraqi base in Kirkuk on Dec. 27 which killed a U.S. contractor and wounded four U.S. service members. After the attack, the U.S. launched its own attacks on Kataib Hezbollah locations in Iraq and Syria. The White House also said Iran-backed militias stormed the U.S. embassy over New Years Day in Baghdad as a retaliation.

Trump purportedly signed off on the operation to kill Soleimani after this attack on the U.S. embassy. The report shows, however, that the killing had been an option for several years and was in line with U.S. foreign policy aggressive stance on Iran. The Quds Force led by Soleimani had been marked as foreign terrorists by both Presidents Obama and George W. Bush. Bolton, who would later be fired by Trump, has been a long time proponent of regime change in Iran, along with Pompeo.

In other news, it has now been revealed that U.S. troops had previously been informed of the Jan. 8 Iranian missile attack on Iraq’s Ain al-Assad base in response to the killing of Soleimani. Secret intelligence warned of the attack on Jan. 7, which resulted in most the U.S. troops housed at the base finding cover in old bunkers, with other flying out. The bunkers were built during the time of Iraq’s former President Saddam Hussein. Satellite images captured by Planet Labs Inc. and analyses by the Middlebury Institute of International Studies at Monterey show the sites destroyed by Iranian missiles at Iraq’s Ain al-Assad Airbase on Jan. 8

Satellite images show the amount of destruction at the base, which was not equipped to handle the barrage of ballistic missiles that hit it one by one, in the very early hours of Jan. 8.