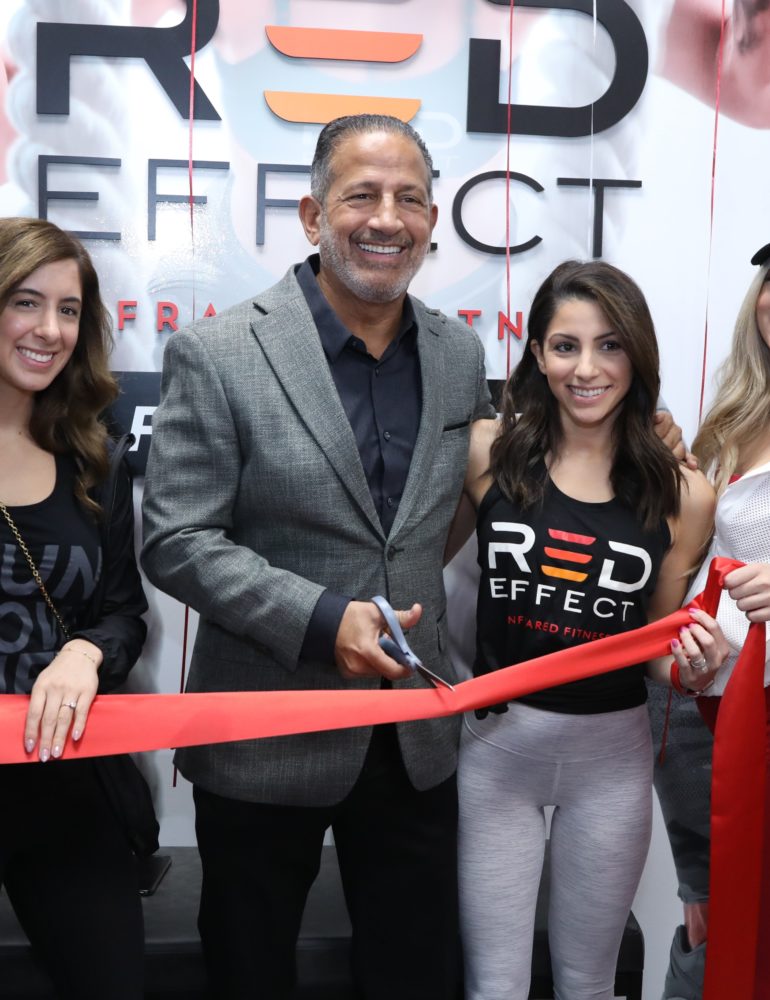 Red Effect CEO Allie Mallad cuts the ribbon on his new West Dearborn location with his daughters Erica, Jessica and Madison. - Photo by Abbas Shehab for The Arab American News

Guests officially welcomed Dearborn native Allie Mallad’s newest location to the neighborhood with music, food, fitness challenges and prizes during the afternoon and were joined by Mallad and his daughters Erica, Jessica and Madison, among others.

Mallad, who is also the founder and CEO of the Massage Green, and Stretch Smart Infrared Therapy Center nationwide chains, has sold more than 300 franchises thus far, and most of them are co-ed.

He told The Arab American News in a video interview that his daughters inspired his goal to provide a unique, exclusive fitness club for women from all walks of life.

“Because I have four daughters I’m extremely excited to be able to give women — whether they’re covered or just any woman —  an opportunity to come to a venue to feel safe and supported and to be able to have that camaraderie with the other women that want to be involved,” he said.

The fitness center separates itself from its competitors through its versatile lineup of unique classes, including boxing workouts, cycling classes and high intensity interval (HIIT) circuit training sessions, among many more, all in a setting that includes infrared heat set to between 75 and 79 degrees on most days. Exercise equipment options also include climbing machines, treadmills and stationary bikes.

Amrieh Eljahmi, who works as the supervisor for both the new west Dearborn and the year-old Dearborn Heights locations, said the classes have been life-changing for those who attend.

“We’ve had so many women come out of their comfort zone and try it,” she said. “It’s a wonderful thing, there’s nothing like Red Effect Infrared Fitness.

“I don’t believe any facility will offer what we offer.”

According to Eljahmi, customers love the infrared component of the facility, the temperature of which is customizable by members.

“We feel that we have the greatest infrared saunas in the world and we’re able to give people the healthy benefit that they need,” Mallad said.

Red Effect classes are suitable for all fitness levels and attract all different types of customers ranging from 16-years-old to 70-years-old, from 90 lbs to 320 lbs, Eljahmi added.

Eljahmi is a huge fan of Red Effect. Her voice reflected her excitement while describing the benefits of its workouts.

“We have a dream team here in west Dearborn; it’s wonderful, inspiring and motivating,” she said, adding that customers have been loving the workouts since its unofficial opening in late November.

“When they’re done, they feel like they accomplished something working out here. Everything is provided for, it’s so fun and exciting; it’s so worth it.”

Those who wish to try out Red Effect may receive their first class for free, Eljahmi said.

Red Effect has several locations in Michigan, including a newly opened facility in Plymouth, as well as in Dearborn, Dearborn Heights, Allen Park, Troy and Ann Arbor. It also has locations in other states, including California and Florida.

For a full map of locations as well as additional information, visit its website at RedEffectFitness.com.