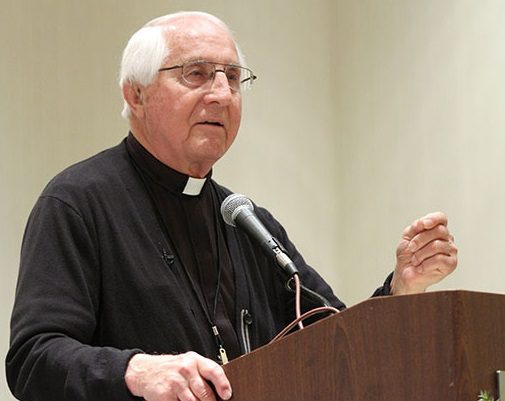 Gumbleton, who has visited and met with victims of war in Iraq, Afghanistan, Vietnam, El Salvador, Nicaragua, Guatemala, Israel, Palestine, Colombia, Haiti and Peru, is well traveled and an outspoken advocate of peace, justice and civil rights who has long called for an end to war. He led a delegation to visit the American hostages in Iran in 1979 and previously served at St. Leo’s in Detroit.

Writing in CounterPunch, Gumbleton, 89, made the request while citing the release of the Afghanistan papers, a large number of documents published by the Washington Post late last year that shows how U.S. officials went to great lengths to mislead the public about the war in Afghanistan.

“The U.S. has killed untold numbers of civilians by unmanned aerial drones, bombing raids, cruise missile attacks and special operations missions in Pakistan, Afghanistan, Iraq and Somalia — also in Syria and Yemen,” he wrote. “The U.S. toppled the Libyan government, leading to years of violent chaos. In all of these places, United States war-making has helped cause humanitarian catastrophes.”

He urged all Catholics to “set aside the futility of war.”

“I call on Catholics in the military, including chaplains, as well as all who work for the military or any branch of the armaments industry, to heed Pope Francis’ call to set aside the futility of war,” he wrote.

“All Catholics should refuse to kill and should refuse cooperation with United States wars. Catholic taxpayers should make every effort to avoid paying for war and weapons. Rather, embrace Jesus, who calls us to love our enemies, put up the sword and take up the cross.”

An outspoken critic of the war in Iraq, Gumbleton was arrested for peacefully protesting outside the White House in 2003.

He did not specifically mention Iran in his CounterPunch op-ed, but he had much to say on U.S. wars in the Middle East.

“United States wars have literally set the Middle East on fire,” he said. “Several million people in the Middle East and North Africa have been killed and tens of millions maimed, traumatized and made into refugees.

“Over the last 19 years United States forces have detained tens of thousands of people in dozens of countries. Prisoners  have suffered ghastly torture and some will remain at Guantanamo Bay without trial until they die.”

In 2006 he alleged that he was sexually abused by a priest as an adolescent while in the seminary.

The church forced him to resign from his role at St. Leo’s in Detroit in 2007. Gumbleton claimed in a 2011 National Catholic Reporter story that he was forced to resign because he spoke in support of extending the statute of limitations for cases of sexual abuse by members of the clergy.