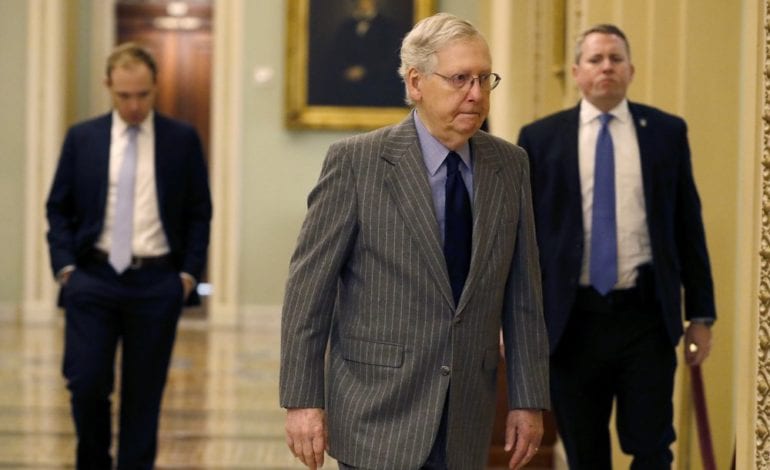 WASHINGTON, D.C. – President Trump’s legal team filed arguments that it plans to use as the impeachment trial is set to begin in earnest in the Senate on Tuesday. This is only the third impeachment trial of a president in U.S history. The defense team plans to argue that the president should be cleared of the two charges of abuse of power and obstruction levied on him by the House of Representatives.

In a 110-page brief issued on Monday, Trump’s lawyer argue that Trump did “absolutely nothing wrong” and that the two articles of impeachment do not amount to impeachable offenses. They also say that even if Trump abused his powers in withholding military aid to Ukraine, he did not violate a specific criminal statue.

Meanwhile, Senate Majority Leader Mitch McConnell proposed a condensed, two-day calendar on Monday for each side to offer opening statements. The Senate will vote on McConnell’s four-page resolution as one of the first orders of business on Tuesday. McConnell’s decision was met with ire among Democrats, with Senate Democratic leader Chuck Schumer calling the proposed rules a “national disgrace.”

“It’s clear Senator McConnell is hell-bent on making it much more difficult to get witnesses and documents and intent on rushing the trial through,” Schumer said.

Democrats have accused the president of abusing his office by pressuring Ukranian President Volodymyr Zelenskiy in a July 25 phone call to look into the business dealings of one Trump’s political opponents, former Vice President Joe Biden, while withholding hundreds of millions of dollars in funds to that country’s military. Democrats have promoted the phone call as a serious crime against the U.S. itself, as they hope to continue the interests of U.S. foreign policy in the region while differing with the president only in strategy.

Trump’s lawyers have said instead that there is no evidence of quid pro quo on Trump’s end and that beyond hearsay, Democrats have no solid facts to back up their claim that Trump withheld aid to force Ukraine into investigating the Bidens. They say the funds were released without an investigation and that Zelenskiy had no idea the money was suspended until shortly before it was released.

On obstructions, Trump’s team is adamant that there is nothing unusual or criminal about the White House’s defiance against the House’s directives for members of Trump’s administration to act as witnesses in the impeachment investigations. They pointed to Justice Department legal opinions which state that advisers to the president are immune from congressional testimony.

Finally, the lawyers argue that nothing in Trump’s conduct constitutes an especially egregious offense and that convicting Trump at the impeachment trial would dilute the standards of impeachment. Democrats have said that the framers of the Constitution created a flexible enough threshold to include Trump’s conduct with Ukraine as an impeachable offense.

A two-thirds vote in the Senate will be required to convict the president on either of the charges. The organizing resolution will be adopted on Tuesday, with both prosecutors and Trump’s defense offering motions on housekeeping questions. Under McConell’s plans, House impeachment managers will then have 24 hours packed in to two days to make their opening arguments, with Trump’s lawyers getting the same amount of time to make theirs.

Sixteen hours will be given to senators to ask questions of both legal teams, given in writing through Chief Justice John Roberts. The questions of whether to call witness and which ones to call will be considered with up to four hours of arguments by both sides. The Senate may go into closed door sessions to debate further and then have a series of votes; and if witnesses are called, they will likely be deposed before any potential live Senate testimony.

After deliberations, the Senate will vote on both impeachment articles. It seems unlikely that the president will be found guilty of the charges.

Netanyahu has “warm” convo with Biden, calls him “president-elect”

Trump asked for options for attacking Iran last week, but held off: source