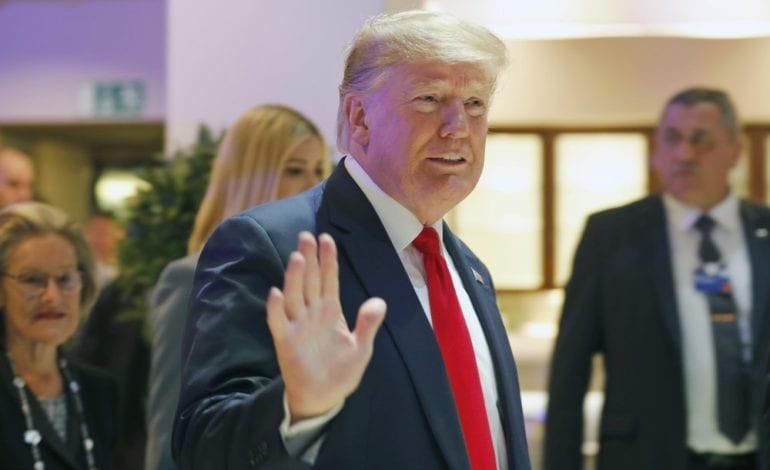 President Trump arrives at the World Economic Forum in Davos, Switzerland on Wednesday, Jan. 22. He took time later to address his impeachment back home, staying characteristically confident in the proceedings. Photo: AP

WASHINGTON, D.C — Arguments in the impeachment trial of President Trump kicked off on Wednesday with Democrats trying to show the American public how far the corrupt scheme to undermine the country went, and urging skeptical Republicans to act on their consciences and vote to remove the president.

After voting on the operating rules on Tuesday, the Senate has given Democrats 24 hours spread across three days to prosecute the charges and try to usher in key, damning evidence and witnesses.

“Over the coming days, we will present to you—and to the American people—the extensive evidence collected during the House’s impeachment inquiry into the president’s abuse of power,” House Intelligence Committee Chairman Adam Schiff told the senate on Wednesday. “You will hear their testimony at the same time as the American people. That is, if you will allow it.”

Schiff has so far tried to appeal to the senators’ own rationality and sense of fairness, asking them to consider previous operating rules put forth during the impeachment trial of President Clinton. Republicans voted on Tuesday along party lines to back Senate Majority Leader Mitch McConell’s proposed resolution to have a swift trial. After some tweaks, the impeachment trial will now largely mirror the Clinton trial, with some differences.

Republicans rejected a series of motions and proposed amendments put forth by Democrats on Tuesday. Republicans shot down one-by-one Democrats’ calls to include testimonies from Trump’s aides such as former national security advisor John Bolton. Word from such witnesses will likely be rejected in the coming days.

For his part, Trump, who was in Davos, Switzerland for a global economic conference, suggested that he would be okay with his advisers testifying, but said this was unlikely as  national security concerns could be undermined.

A new poll from The Associated Press-NORC Center for Public Affairs Research shows the public is slightly more likely to say the Senate should convict and remove Trump from office than to say it should not, 45 percent to 40 percent. But a sizable percentage, 14 percent, say they are not informed enough to have an opinion. About 7 in 10 respondents said Trump should allow top aides to appear at the trial as witnesses.

Per McConnell’s rules, senators may decide on whether testimonies from witnesses and further evidentiary documents after opening statements are given by both sides and senators have had a chance to ask questions.

“The McConnell rules seem to be designed by President Trump for President Trump,” Senate Minority Leader Chuck Schumer said during the trial proceedings on Tuesday. “It asks the Senate to rush through as fast as possible and makes getting evidence as hard as possible.

“The McConnell resolution will result in a rushed trial with little evidence in the dark of night.” So far, Trump’s lawyers have not filed a motion to altogether dismiss the trial, which is unsurprising since there are not enough Republican votes to pass such a motion. Republicans senators have been restless and some are tired of what they say are a repeat of points brought up by Democrats in the past. The senators are ordered to stay silent through the proceedings without any cell phone and Internet use. The trial stretched past midnight on Tuesday.