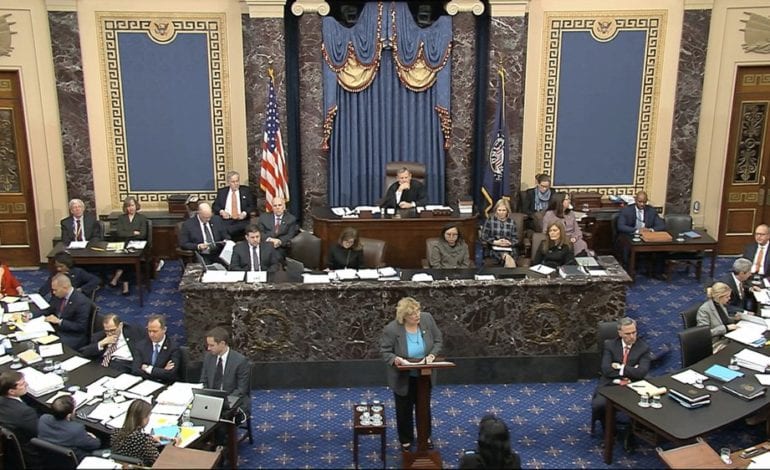 WASHINGTON, D.C — On yet another day of impeachment hearings, senators listened to the Democratic team on Thursday as they argued that President Trump sought a phony investigation of former Vice President Joe Biden and his son Hunter’s business dealings in Ukraine while pursuing a unproven conspiracy theory about the country.

North Carolina Republican Richard Burr handed out fidget spinners, a popular toy, to his colleagues as they sat through long hours of Democratic arguments, which wrapped up around 10:30 p.m. Eastern Time. Democrats will end their arguments on Friday, after which Trump’s legal team will embark on their three days (or less) to make their case in defense of the president.

Democrats said there was no evidence of wrongdoing in the Bidens’ dealings in Ukraine. In a repeat of the House impeachment hearings, they said Trump abused his power when he pressured the Ukrainian government to investigate his political rival.

“There was no basis for the investigation the president was pursuing and pushing,” said Rep. Sylvia Garcia of Texas, a Democratic impeachment manager. “None. He was doing it only for his own political benefit.”

Democrats claim that Trump and his advisor and personal attorney Rudy Giuliani pushed a bogus conspiracy theory that Ukraine and not Russia meddled in the 2016 U.S. elections. House Intelligence Committee Chairman and lead Democratic impeachment manager Adam Schiff said the theory was central to the impeachment charges.

Several senators spoke to reporters during breaks in the proceedings. Michigan’s own Gary Peters said he would perform his senatorial duties diligently, but has not forgotten about the people of his state.

“I swore an oath to defend the Constitution as an officer in the U.S. Navy Reserve and when I became U.S. Senator — and I will fulfill my constitutional responsibility in the Senate,” Peters, a Democrat, said in a statement to The Arab American News. “Abuse of office and obstruction of Congress are very serious charges that deserve solemn consideration. We must have a fair and transparent process and I will thoroughly evaluate the facts that are presented to the Senate.

“But let me be very clear, my focus on the people of Michigan will remain steadfast – protecting people with preexisting health conditions and passing legislation to lower prescription drug costs; expanding skills training programs so everyone has the skills needed for good-paying jobs and advancing efforts to protect the Great Lakes and our drinking water.”

“If they want new stuff, there is plenty of it,″ he told reporters before Thursday’s session. “As the (Democratic) managers made clear, a lot of the documents are sitting there, all compiled, all ready to go, with simply a vote of four Republicans to subpoena them.″

Trump tweeted on Thursday that this was by far the most “unfair” and “corrupt” congressional hearing in history. With Republicans controlling the Senate 53-47, an acquittal of the president seems likely.