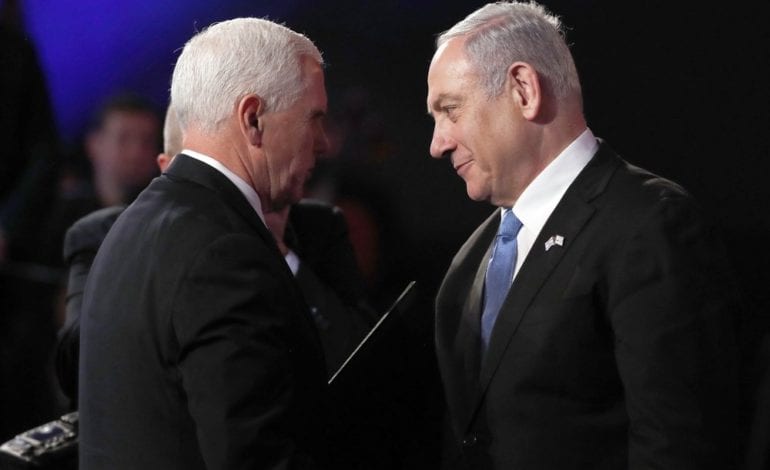 WASHINGTON, D.C. — The White House said in a statement on Thursday that Israeli Prime Minister Benjamin Netanyahu will visit the White House next Tuesday to meet with President Trump about Trump’s long-awaited Middle East peace plan. Trump confirmed the news, telling reporters on Air Force One that he will release the details of the plan before Netanyahu’s visit.

Netanyahu’s main election rival Benny Gantz will also visit the White House, though it is not immediately clear whether Trump would meet the two separately or together. Vice President Mike Pence extended the invitation to both Netanyahu and Gantz on a visit to Jerusalem.

Trump discussed the timing of the plan’s release with two of its architects, Trump son-in-law Jared Kushner and advisor Avi Berkowitz. Trump said Palestinians may react negatively to the plan but that it’s, “actually very positive for them.”

“It’s a great plan,” he said aboard his flight to the Miami area. “It’s a plan that really would work.”

No official word on whether Palestinians were invited to hear about the plan.

“We warn Israel and the U.S. administration not to cross any red lines,” a spokesman for Palestinian President Mahmoud Abbas said.

Gantz had previously objected to the unveiling of the peace plan before Israel’s March elections, though he has since lifted this objection. The right-wing Netanyahu will enjoy a boost from Trump’s invitation, Israeli political analysts have said. Netanyahu has been indicted on criminal charges, as his country heads towards a third election in less than a year.

So far the document, dozens of pages long, that contains the peace plan has been kept under wraps and has been delayed several times over the last two years. Kushner proposed a $50 billion economic plan for the Middle East last July in Bahrain. The Middle East peace plan aims to end the decades long conflict between Israel and Palestine. Reuters says the political proposal is the product of three years of work by Kushner, Berkowitz and former envoy Jason Greenblatt.

Palestinians are skeptical of the plan, even before it’s published, due to the propensity of the Trump administration to favor Israel in past dealings. The administration has refrained from endorsing a two-state solution, has recognized Jerusalem as Israel’s capital and has moved the U.S. embassy to the city.

It also cutting funding to the U.N. program that helps Palestinian refugees, which slashed hundreds of millions of dollars in aid for projects in the West Bank and Gaza and cut funding to hospitals in Jerusalem that serve Palestinians. Worse still, Secretary of State Mike Pompeo said last November that the U.S. would no longer view Israeli settlements in the West Bank as inconsistent with international law. Netanyahu announced last September that he intends to annex the Jordan Valley, a large swath of the Israeli-occupied West Bank.

The Palestinian Authority fears that the plan will cut out any hope of Palestinian self-governance and independence in the West Bank, east Jerusalem and the Gaza Strip.