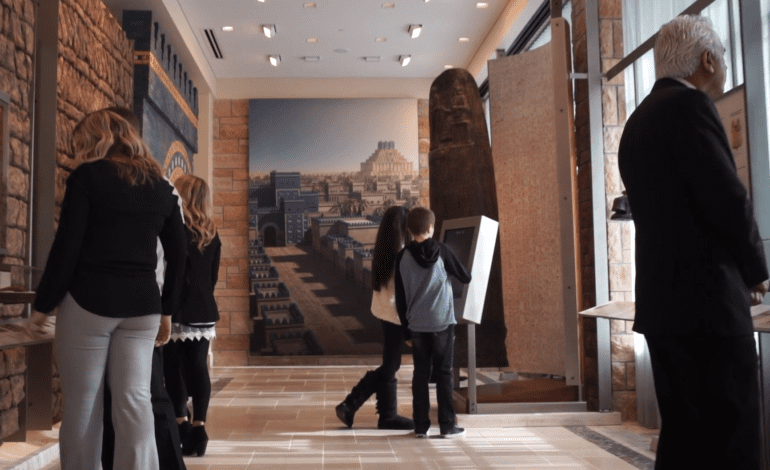 Children and adults take in the first wing of the museum, Ancient Mesopotamia. Photo via the Chaldean Cultural Center

WEST BLOOMFIELD — While the Metro Detroit area is known nationally for its large Arab American population and its rich history, the region also is home to more than 160,000 Chaldeans according to the Chaldean Community Foundation.

Chaldeans are an ethnic group from Iraq that traces their roots back more than 5,000 years to ancient Mesopotamia.

While the community dates all the way back to the area known as “the cradle of civilization”, its new home is here, as the region currently boasts more Chaldeans than anywhere in the world.

The desire to preserve and celebrate the long, storied and successful history of the Chaldean American community, and the history of Chaldeans worldwide, is what led to the creation of a true Metro Detroit gem — the world’s first, largest and only Chaldean museum, which is housed inside the Chaldean Cultural Center at the Shenandoah Country Club here.

According to the museum’s executive director, Weam Namou, the importance of preserving the community’s history has never been more clear than it is now, considering Metro Detroit’s place as the largest global home for Chaldeans.

“This is the crown gem of the Chaldean Cultural Center,” she said during a tour for The Arab American News this past week.

Mesopotamia, where Chaldeans trace their roots back to, is considered to be the first human civilization in large part because its residents “documented everything,” said Namou, who is also an author.

Now the local community is continuing that tradition in a time of need, thousands of years later.

Longtime author and historian Jacob Bacall is among a dedicated group of Chaldean Americans working tirelessly to chronicle and preserve the community’s history.

“The Detroit metropolitan area has become the new capital of Chaldeans in the world,” Bacall writes in the Michigan State University book 100 Questions and Answers About Chaldean Americans, which is among the historical literature available at the museum.

Chaldeans began immigrating to the area in the early 20th century, joining a long list of more than 50 ethnic groups that have helped make Metro Detroit what it is today.

The entrepreneurial spirit of the Chaldean American community is on full display in the museum, with interactive exhibits, original artifacts and replica artifacts of Chaldean storefronts and businesses, historical items dating back thousands of years and profiles on local success stories.

The museum cost more than $2 million to build and bridges the gap between ancient Mesopotamian times, to life in Iraq, all the way to the Chaldean American community’s new home in Metro Detroit.

While Chaldeans haven’t always come to the United States of their own accord, oftentimes leaving Iraq due to personal or national strife, they’ve embraced the American experience in countless unique ways.

Many Chaldeans were comfortable immigrating to Metro Detroit because of the large Arabic-speaking population that had arrived before them. Chaldean Americans speak Aramaic, the language of Jesus Christ, and many speak Arabic as well because of their experiences in Iraq.

“We’re all from the Middle East,” Bacall told The Arab American News. “We come mainly from Iraq, the base of all the Chaldeans. In Michigan, we feel connected to the whole region; whether it’s here or even to the Arab American Museum in Dearborn, it’s a common ground and culture we share.”

While leaving their home country has been difficult in many cases, Metro Detroit has represented a promised land of sorts where many Chaldeans have been able to celebrate, rediscover and redefine their identities.

“We had to come to discover who we really are, our history,” said Namou, who added that several schools have been touring the museum to learn the forgotten history of the community.

“They really appreciate and understand the value of this community, especially in Michigan.”

The museum has been a great source of pride for local Chaldean Americans.

“We want our children and grandchildren to know that they are Chaldean, but not just know it, but embrace and love their heritage,” Mary Romaya, a member of the committee that worked to make the 2,500 square foot project a reality, told ClickonDetroit.com.

“Not that we are not American, but we have an identity that spans over 5,000 years.”

The Chaldean Cultural Center’s museum consists of five galleries, including Ancient Mesopotamia, Faith and Church, Chaldean Village Life, Journey to America and Chaldeans Today, which features video presentations and storytelling from some of the community’s most successful leaders and entrepreneurs.

Interactive exhibits cover topics ranging from everyday life for Chaldean Americans to life for agricultural workers in ancient times all the way back to the Code of Hammurabi, a collection of 282 rules dating to ancient Mesopotamia.

Experts from across the art world were consulted to make the gallery an authentic representation of thousands of years of Chaldean life, including a freelance producer who worked on the National September 11 Memorial and Museum in New York, as well as employees of the Detroit Institute of Arts, the Arab American National Museum, the Holocaust Memorial Center of Farmington Hills and the Smithsonian in Washington, D.C.

The museum is open from 10 a.m. to 3 p.m., Monday through Friday and advanced reservation is required. Those who wish to visit may contact the Center at 248-681-5050 or through email at info@ChaldeanCulturalCenter.org.

Weddings, fundraisers and religious gatherings are also hosted at the Center.