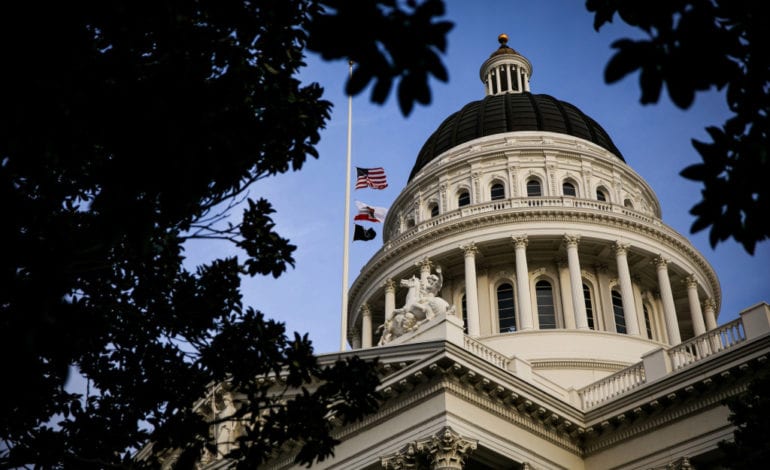 The California State Capitol in Sacramento on December 3, 2018. Photo via CalMatters

SACRAMENTO, CA — The state of California has become a political battleground since the announcement of its pending Assembly Bill 331 mandating ethnic studies in high schools and Cal State universities, with controversy taking root over the inclusion of a section on the Boycott, Divestment and Sanctions (BDS) movement protesting Israel’s occupation of Palestinian lands.

The inclusion of Arab American Studies has been among the most contentious issues surrounding the landmark, first-of-its-kind bill, which would affect the educational curriculum of more than six million students in the Golden State if passed.

Earlier this month, leading Asian American scholars defended the inclusion of Arab American Studies, which was chosen as a spotlight group for the original draft of the curriculum, insisting that, “Arab American Studies not be compromised and sold out to political pressures.”

Their statement was released to the California Department of Education by the National Board of Directors of the Association of Asian American Studies, and also criticized attempts to remove the section.

“We oppose current and future efforts that seek to undermine, dilute or sideline critical dimensions of the (Ethnic Studies Model Curriculum, or ESMC) draft outside the mandated revision process,” the statement read.

In this case, political pressure has been applied by the San Francisco-based Jewish Community Relations Council (JCRC), which develops curricula and trains teachers on issues related to Jews, Judaism and Israel in public schools.

A 29-page, chapter-by-chapter review of the proposed Ethnic Studies curriculum was prepared by the Institute for Curriculum Services (ICS), an independently funded group operating with the support and approval of the JCRC, according to an article published by the Jewish News of Northern California.

The review requested the removal of all references to the Boycott, Divestment and Sanctions (BDS) movement against Israel, calling it, “outside the disciplinary boundaries of American ethnic studies.” ICS also said the proposed curriculum, “presents only a single viewpoint on a complex international issue” that is. “hostile to others involved in the matter.”

Jewish groups have expressed concerns that the BDS movement is lauded in the curriculum and that it is described as a “global social movement that currently aims to establish freedom for Palestinians living under apartheid conditions”, without including any pro-Israel counterpoints. The curriculum also reportedly leaves out any discussion on Jewish American studies or anti-Semitism.

Assembly Bill 331 was officially shelved and turned into a “two-year bill” after Assemblyman Jose Medina of Riverside announced that it would be revised and likely delayed until 2021, according to a Los Angeles Times story. This course of action is typically taken to resolve controversies and to rally support.

Which groups should be included under ethnic studies in California?

Historically, ethnic studies in California have focused mainly on four groups, mostly compromising people of color: Latinos, African Americans, Asian Americans and indigenous peoples, who were present in the Americas before European colonization.

The field was founded through activism in 1968 when the Black Student Union and a coalition of student groups at San Francisco University, known as the Third World Liberation Front, began a student strike calling for ethnic studies, according to the Los Angeles Times.

But the inclusion of Arab American Studies and lessons on Pacific Islanders as proposed in the bill would be a mistake according to a letter from numerous other ethnic groups, who question where the line of inclusion should be drawn.

“Ethnic studies traditionally has been and should continue to be about African Americans, Native Americans, Latinos/Chicanos and Asian Americans,” a November 4 letter from representatives from the American Hellenic Council, the Armenian National Committee of America, the Hindu American Foundation and the Korean American Coalition addressed to California Superintendent of Public Instruction Tony Thurmond stated, calling it a mistake to branch out beyond the four traditional ethnic studies ethnicities without including their groups.

“If the curriculum is committed to including the experiences of ethnic groups beyond these four groups, then those drafting the curriculum should not be allowed to cherry-pick communities without public scrutiny.”

Proponents of the current ethnic studies curriculum draft, including the Jewish Voice for Peace – Bay Area, which supports BDS, said they believe the focus should be kept on people of color and that Arab American Studies should be included.

“The purpose of the model Ethnic Studies curriculum is to center the history of people of color who have been marginalized or ignored by the current curriculum,” it said in a press release in support of the curriculum.

The final draft is expected to be completed in March. A petition on Change.org in support of the current draft has more than 11,000 signatures and is nearing its goal of 15,000.

“While revisions are a normal part of the process, this curriculum is now being aggressively attacked from groups who have little to no experience in the discipline, which could result in the entire curriculum being delayed and fundamentally diluted by people without expertise in the field, who want to completely rewrite it,” the petition reads.

“After 50 years of struggle and work for this moment, it cannot be taken away from us at this last second — doing so would be an act of institutional racism.

“Our students deserve an authentic ethnic studies curriculum. The voices and guidance of communities of color and Native people must remain at the heart of it.”