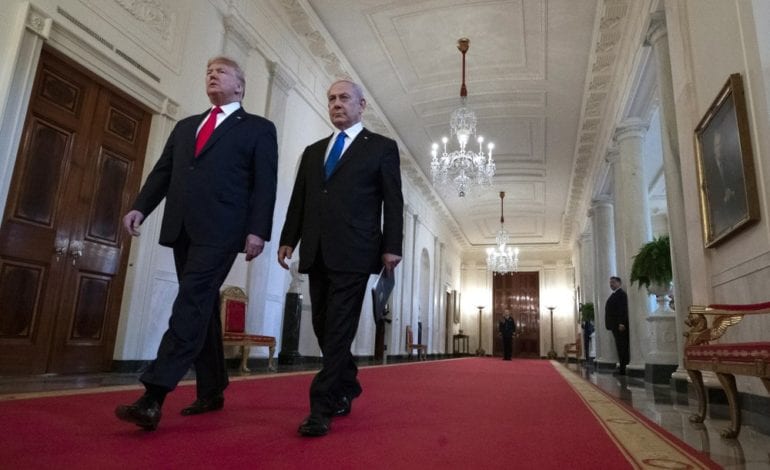 WASHINGTON, D.C. – President Trump and his hard-line, right-wing ally, Israeli Prime Minister Benjamin Netanyahu, unveiled Trump’s long-awaited Middle East peace plan on Tuesday. The plan has been preemptively rejected by Palestinians, who see no signs in the plan of an end to Israeli occupation and illegal settlements. Netanyahu, on the other hand, was highly satisfied with the White House’s prescription for the region.

The plan fails to address any of the most contentious issues that have been roadblocks in previous peace processes, with Netanyahu promising to continue annexing the Jordan Valley, and the U.S. giving its blessing and recognition for all Israeli settlements without exception and maintaining that Jerusalem would remain Israel’s capital.

“While a physical division of the city must be avoided, a security barrier currently exists that does not follow the municipal boundary and that already separates Arab neighborhoods in Jerusalem from the rest of the neighborhoods in the city,” the plan states.

“This physical barrier should remain in place and should serve as a border between the capitals of the two parties. Jerusalem will remain the sovereign capital of the State of Israel, and it should remain an undivided city. The sovereign capital of the State of Palestine should be in the section of East Jerusalem located in all areas east and north of the existing security barrier, including Kafr Aqab, the eastern part of Shuafat and Abu Dis, and could be named Al Quds or another name as determined by the State of Palestine.”

At a ceremony at White House, Trump said the plan is “going to work” in bringing peace to the region. The president was joined by Israeli officials, rich Republican donors and evangelical Christian supporters, representatives from Bahrain, Oman and the United Arab Emirates. No representatives from Palestine were present.

For years, Palestinians have sought areas such as the West Bank and east Jerusalem to be part of an independent state. There are currently 700,000 Israeli settlers in these areas, which came under Israeli control after the 1967 Mideast war. Details of Trump’s peace plan show he has no intention of working with Palestinians on these demands, and instead furthers Netanyahu’s nationalist agenda.

The proposed state would include more than a dozen Israeli “enclaves” monitored by Israel. The state would be demilitarized and give Israel overall security control. Areas in East Jerusalem given to Palestinians will consist of overcrowded ghettos behind towering Israeli separation barriers. There will be a four year freeze on Israeli settlements in certain areas of the West Bank, though the freeze would only apply to areas where there are no settlements. Netanyahu said he does not consider the plan as a limitation on construction.

“This dictates once and for all the eastern border of Israel,” Netanyahu said after the ceremony. “Israel is getting an immediate American recognition of Israeli sovereignty on all the settlements, without exceptions.”

Palestinian President Mahmoud Abbas has rejected the plan as “nonsense”, promising his country will say “1,000 no’s” to Trump’s “Deal of the Century.” He also said Palestinians would resist the plan through peaceful and popular means.

Jordan, which is located next to the West Bank and contains a large Palestinian population, said it remained committed to a two-state solution based on Israel’s pre-1967 lines. It has also rejected to Israeli annexation plans. A spokesman for U.N. Secretary-General Antonio Guterres echoed this support for Palestinian nationhood based on recognized pre-1967 borders. Egypt and Saudi Arabia encouraged the resumption of talks between Israel and Palestine.

Trump’s adviser Jared Kushner, one of the architects of the plan, told a news agency that if Palestinians brought a counter-proposal in good faith, “we’ll figure out the right forum to engage in it to bring about a solution.” He said Palestinians should take time to consider “a very strong opening offer.”

Thousands of Palestinians took to the streets in Gaza City ahead of the announcement on Tuesday. Abbas has affirmed that Jerusalem is not for sale. The economic component of the plan unveiled last June offers a $50 billion aid package to Palestine. Jordan will continue its control over the Al-Aqsa mosque compound in Jerusalem.

U.N., Sanders among those rejecting deal

Meanwhile, the United Nations rejected Trump’s “deal” and reiterated that the Israeli-Palestinian conflict should be solved based on U.N. resolutions and international law.

“The position of the United Nations on the two-state solution has been defined, throughout the years, by relevant Security Council and General Assembly resolutions by which the Secretariat is bound,” said Stephane Juarric, a spokesperson for the U.N. secretary-general.

“The United Nations remains committed to supporting Palestinians and Israelis in resolving the conflict on the basis of United Nations resolutions, international law, and bilateral agreements and realizing the vision of two States – Israel and Palestine – living side by side in peace and security within recognized borders, on the basis of the pre-1967 lines,” he added.

Palestinians have also dismissed Trumps plan as a “conspiracy,” a report from Middle East Monitor said.

“The United States can bring unequaled leadership to resolving the Israeli-Palestinian conflict, but we must use that leadership to promote a just and durable agreement,” he said in a tweet. “Any acceptable peace deal must be consistent with international law and multiple U.N. resolutions.

“It must end the Israeli occupation and enable Palestinian self-determination in an independent state of their own alongside a secure Israel. Trump’s so-called ‘peace deal’ doesn’t come close, and will only perpetuate the conflict. It is unacceptable.”

“This is not a peace plan, it actually aggravates issues in the region,” she said in a press release.

“The negotiations did not include Palestinians, or buy-in from regional partners such as Jordan and Egypt. For peace to prevail, both states need to be treated fairly. To be clear, this package grants a conditional state in name only to the Palestinians. A state that could never be sovereign because it is not contiguous and is entirely surrounded by Israel.

“Further, providing no right of return for Palestinian refugees, annexing the Jordan Valley to Israel and recognizing West Bank settlements as Israeli territory does not treat Palestinians as equals. This proposal holds the potential to further the conflict and occupation and is not an earnest attempt at peace in the region.”

Organizations including the Churches for Middle East Peace (CMEP) in Washington, D.C. and a coalition of nationwide American Palestinian groups also issued condemnations.

“The proposed plan would further entrench the Israeli security establishment, ensuring that generations of Israeli young men and women will serve in a military tasked with continuing control of the Palestinian people,” said Rev. Dr. Mae Elise Cannon, the group’s executive director. “The inevitable result will be more human rights abuses, trauma and violence.”

The groups said the timing of the release of the “deal” appears to be politically motivated to distract from President Trump’s impeachment proceedings and Netanyahu’s corruption case.

“The unveiling of the so called “Deal of the Century” is yet another disgraceful act by the Trump Administration,” their letter said. “A ‘peace deal’ is supposed to entail conflict-ending terms that are to the mutual benefit of both parties and can only be reached through a level playing field. This so-called “deal” is nothing more than an attempt by President Trump to impose an extremist Israeli agenda on the Palestinians, without regard to their most basic rights or aspirations.”

Nick Meyer contributed to this report.