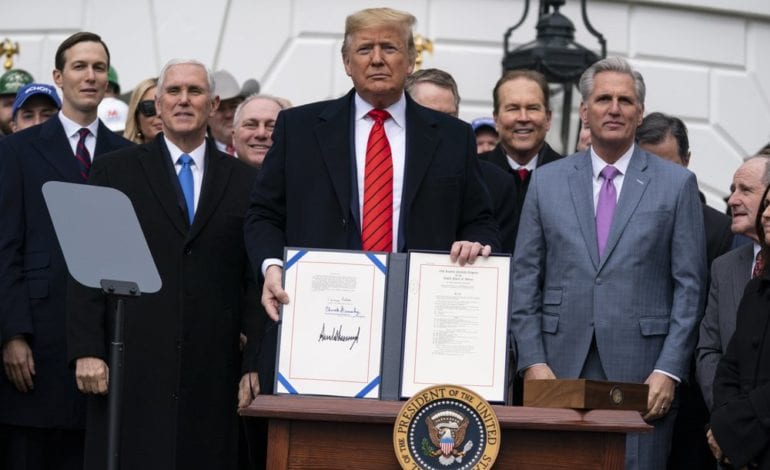 President Trump shows off a revamped North American trade agreement with Canada and Mexico at the White House. He will visit an auto supplier facility in Warren on Thursday.

LANSING — The Michigan Democratic Party released several statements in anticipation of President Trump’s Thursday visit to a Warren auto parts supply company, Dana Incorporated. This will be Trump’s first visit to Michigan in 2020, a day after he signed into law a revamped trade deal with Mexico and Canada.

Trump won by 12 percentage points in Macomb County, the largest county in Michigan to vote for the current president. On Sunday, Michigan Democratic Party spokesman Christian Slater said Trump has fallen short on promises made to the blue collar voting base Trump’s visit is set to appeal to.

“Michiganders are used to Trump coming to Warren and making big promises, but now we’ve seen his record: Lost manufacturing jobs  and agenda that benefits the rich and powerful over working families,” Slater said in a statement. “When Trump campaigned in Warren in 2016 he promised ‘you won’t lose one plant’ — but he was too ineffective to follow through on his words, factories are closing and under his administration Michigan lost over 5,000 manufacturing jobs last year.

“Michiganders know Trump offers nothing more than harmful policies and empty words as he puts his rich friends and special interests before everyday working families, and voters will hold him accountable.”

Democrats point to campaign promises Trump made early on about manufacturing in Michigan and the Rust Belt states in general. Automotive capital has wreaked havoc on communities across the region for decades by cutting jobs, moving factories abroad or to the American South and through automation, during both Democratic and Republican administrations.

Democrats pointed to headlines about General Motors’ job cuts in Warren and a decline in manufacturing jobs in Michigan overall. The party warns that Trump will make such “broken promises” again on Thursday. It made additional statements later in the week claiming Trump’s 2017 tax plan has slashed taxes for the wealthy in Michigan while hiking them on working families.

“Trump won’t tell voters, but his tax scam was a massive handout to his wealthy friends and special interests that will hike taxes on everyday working families,” Slater said. “Michigan workers need more than lip service and more broken promises from this ineffective president.

Slater said on Monday that the U.S.-China trade war had repercussions for Michigan workers, which Trump will likely dodge in his attempts to win this key battleground state.

“He won’t tell voters, but Donald Trump broke his promises to thousands of Michigan workers who have lost their jobs because of his erratic trade war,” he said. “Trump will try to duck, dodge and spin his way around that fact but working families know him and his harmful policies are to blame.”

The White House also began a “Phase-1” deal with China this month, scraping Trump’s earlier plans to impose tariffs on $160 billion in Chinese imports and cutting import taxes on an additional $110 billion worth. The U.S. will still maintain tariffs on $360 billion in Chinese products. In return, China will have to take certain provisions concerning trade secrets and intellectual property; and more importantly agree to buy an extra $200 billion worth of U.S. manufacturing, energy and farm exports this year and next. Critics have wondered if China will be able to live up to its  end of this unusual bargain.