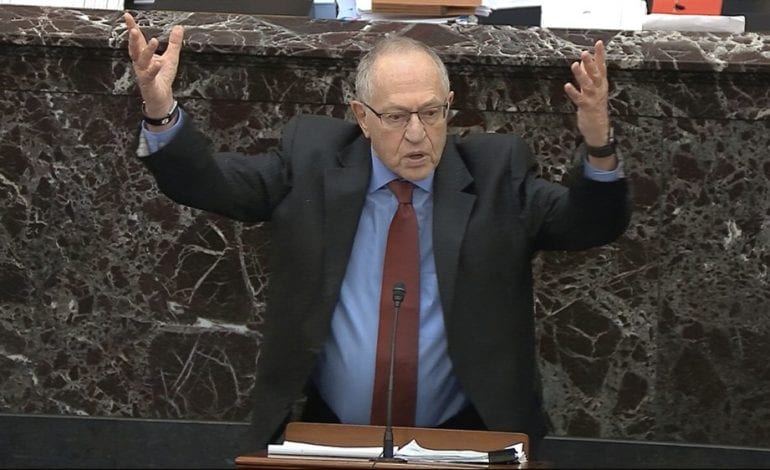 Trump attorney Alan Dershowitz answers a question during the president's impeachment trial in the Senate on Wednesday. The Senate is set to vote on the question of witnesses in the trial on Friday.

WASHINGTON, D.C. — A crucial vote by the Senate on Friday will decide if witnesses will be heard from in the impeachment trial of President Trump. Senators grilled both defense and prosecution teams on Thursday, with Republicans seeking an end to what they call a partisan sham of a trial.

For now, Democrats are pushing for testimonies from key witnesses, such as former Trump advisor and renowned war hawk John Bolton, whose new book is said to add to the information on which Democrats are basing their impeachment charges. The party’s alignment with Bolton is an indication of how similar it is to the Republican Party when it comes to maintaining U.S. power globally, differing only in strategy.

Democrats say Bolton’s forthcoming book contends that he personally heard the president say he wanted to withhold military aid from Ukraine until that country agreed to investigate former Vice President Joe Biden and his son Hunter’s business dealings. The White House has blocked its officials from testifying and sent a letter to Bolton’s attorney objecting to classified information in the manuscript, which Bolton has denied.

Trump attorney Eric Herschman argued that Democrats were only prosecuting the president because they will be unable to defeat him come election day, saying it should be up to the “American people to decide who should be our president.”

Another attorney for the president, retired professor Alan Dershowitz, had a unique defense for Trump’s actions involving Ukraine, positing that the president was within his rights to make sure he is reelected as his reelection would be in the public’s best interest. Confounding many, he later rejected the very essence of his own statements.

“They characterized my argument as if I had said that if a president believes that his re-election was in the national interest, he can do anything,” Dershowitz said of his statement later. “I said nothing like that, as anyone who actually heard what I said can attest.”

Senate Majority Leader Mitch McConnell is yet to lock down the votes required to reject such witnesses from entering the trial, though it is unlikely that Democrats will be able to capture a majority vote in their favor. Prominent Republicans like Mitt Romney of Utah have expressed interest in hearing from Bolton, but these votes may not be enough.

The Senate is split 53-47 towards Republicans, meaning four Republicans will have to side with Democrats to constitute the 51 votes required to call witnesses and decide which ones to call, among other trial matters. Senate Democratic Leader Chuck Schumer said bringing Republicans into the fold was an “uphill battle”, though he remains hopeful.