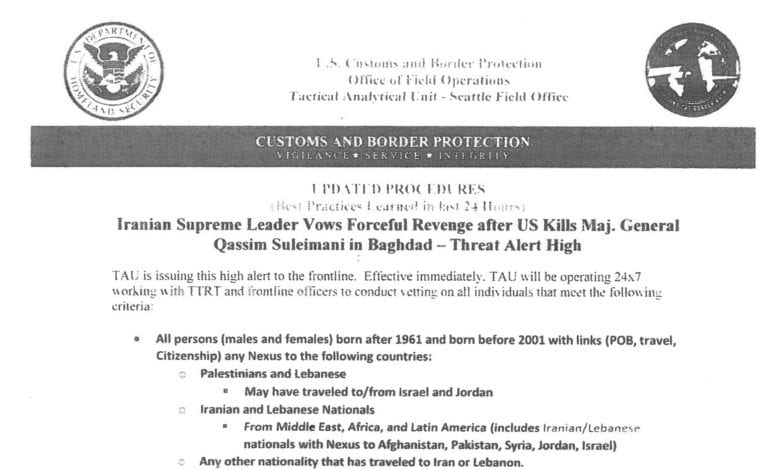 A section of the directive issued around Jan. 3 from Seattle CBP instructing officers to vet Iranian, Palestinian and Lebanese individuals

SEATTLE — A report by a community newspaper in Washington unveiled a directive issued by U.S. Customs and Border Protection’s Seattle Field Office that instructs officers to perform vetting on individuals from or who have connections to Palestine, Lebanon or Iran, as well as those belonging to other nationalities that have traveled to Iran or Lebanon.

The Northern Lights obtained the bulletin, which had come from the Tactical Analytic Unit (TAU) within the CBP, via local immigration attorney Len Saunders, who received it from an anonymous source. The paper verified the authenticity of the document by enlisting an expert in CPB communications, who found it “shocking” it was given to someone outside of the CBP.

The paper said that following the directive issued around Jan. 3, ports of entry in the Blaine area, north of Seattle, saw more than 60 incidences of detention of people with Iranian backgrounds, including U.S. citizens and permanent residents. Some were detained for up to 12 hours. At the time, a spokesperson for CBP said no such directive existed. They have not made any additional comments to the paper at this time.

The bulletin can be read in its entirety here:

The bulletin, entitled “Iranian Supreme Leader Vows Forceful Revenge after U.S. Kills Maj. General Qassim Suleimani in Baghdad — Threat Alert High”, refers to the Jan. 3 assassination of the Iranian general in Baghdad. It directs “frontline” officers to conduct vetting on all individuals, male or female, born after 1961 and before 2001, with travel, citizenship or place-of-birth links to Palestine and Lebanon who may have traveled to or from Israel and Jordan.

The order includes Iranian and Lebanese nationals from the Middle East, North Africa and Latin America or who have connections to several other countries, like Pakistan. The criteria also names any individual who has traveled to Iran or Lebanon. It ask officers to fill out a CTR form, which according to the Northern Lights article is a counterterrorism checklist, on individuals who meet “High Side Vetting Criteria”, such as military background, extremist ideology, links to terrorism, criminality and deceptive behavior.

A CBP whistleblower told the paper that a Blaine port director put out a directive to suspend detention operations on January 5, once news broke that Iranian-born travelers were detained at other boarder crossings, based solely on their national origin.