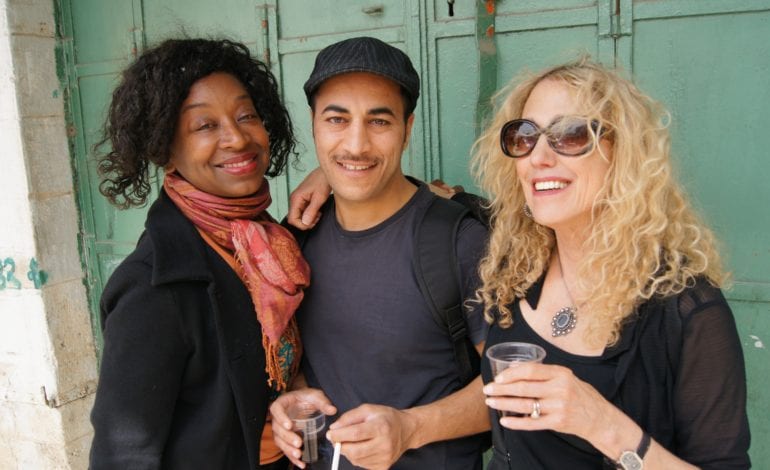 Al Helm captures a traveling Palestinian play, “Passages of Martin Luther King”, and an African American gospel choir that provides the Greek chorus to the play, as the group tours the West Bank preaching nonviolence, a central theme in Dr. King’s life and work during the civil rights movement. At first the choir is apprehensive about working with Palestinians whose American media image is that of angry, violent terrorists. For the Palestinian actors, Americans are in turn unconditional supporters of their occupiers.

The film packs a lot in its hour and a half run-time; and in its course, the choir, Palestinian actors, including Ramzi Maqdisi who plays Dr. King, and the play’s organizers grow bonds of understanding and mutual exchange. The story rolls out organically and navigates the complexity of life under occupation. It follows the choir on their journey through the Holy Land and their inner transformation as their ideas of Israeli settlements and Palestinian rights undergo change. Gina Asfour and Ramzi Maqdisi in “Passages of Martin Luther King” performed in the West Bank in 2011.

Al Helm captures this dynamic while undertaking the harrowing task of documenting life under occupation.

“I was brought to Palestine by Clay (Carson), who is an old friend of mine since he was the key advisory on a film I made about the Civil Rights Movement in Mississippi called Freedom on my Mind, said Field, on the phone from Berkeley, California.

The film, like the liberation struggle it captures, is thoroughly interlinked globally and and across history. The play’s writer is Clayborne Carson, the renowned Stanford University historian, director of the King Papers Project, and an authority on the life and work of Martin Luther King. The play itself becomes transformed once in the hands of Palestinian theater director Kamel El Basha, who takes liberties with its structure, much to the chagrin of Professor Carson.

Carson also collaborated with Field on a documentary series on Aparthied-era South Africa called Have you Heard from Johannesburg?. In this still from the film, former Stanford University student and Palestinian activist Fadi Quran (center) brings his professor, Dr. Clayborne Carson (right), to a non-violent demonstration in the West Bank.

It’s an almost impossible task to militarily fight one of the strongest armies in the world, which is the Israeli army. In the fight to overthrow the Apartheid regime in South Africa, the non violent means — sanctions, boycotts, corporate pull outs — were crucial. – Connie Field

The members of the choir all belonged to churches aligned with Israel, as is clear by their initial testimony about what they knew about the situation in the region.

“Because this choir (comprised) of very religious Christians, I became very interested with what this journey was going to mean for them, working with Palestinians and seeing Palestinian realities,” Field said. “I ended up staying and filming for a month.

“I am quite political and was of course conscious of the fact that I wanted to document a bridge between the African American community and Palestinians.

Field returned with the footage and worked with her editor to create the story of the film. Al Helm features personalities who in one way or another become stand-ins for various facets and modes of thought among Palestinians. In the Jenin Refugee Camp, the choir and play meet up with the charismatic peace activist and artist Juliano Mer-Khamis, who would be assassinated during the course of the film.

In Nabih Salih, they meet with non-violent Palestian protesters near an Israeli settlement and are introduced to the family of Ahed Tamimi, a teenager who made headlines for bravely confronting armed Israeli soldiers. Mer-Khamis’ assassination came as a great shock to the play’s cast and crew, who were fresh from a performance of the play at Mer-Khamis’s Freedom Theater in Jenin.

The shock was compounded by the fact that his death occurred on April 4, the same day as Dr. King’s 1968 assassination. Field said the uncanny coincidence was profound to the American members of the play. She intercut found footage of the aftermath of the assassination with her own footage. “A major Arab organization brought me out to show the film in Washington, D.C.,” Field said. “I was told that certain Arab audiences did not like the fact that the film dealt with the question of nonviolence.

“I think that had to be dealt with because of who MLK was. My response was that for me it’s about what’s politically practical, not what anyone has a right to do. Anyone has the right to pick up arms against oppression, but it’s not always the best political choice. It’s an almost impossible task to militarily fight one of the strongest armies in the world, which is the Israeli army. In the fight to overthrow the apartheid regime in South Africa, the non violent means — sanctions, boycotts, corporate pull outs — were crucial.”

The film can be purchased on DVD via Clarity Films (//clarityfilms.org/purchase_alhelm.html) or rented on the VIMEO streaming service at https://vimeo.com/ondemand/alhelm