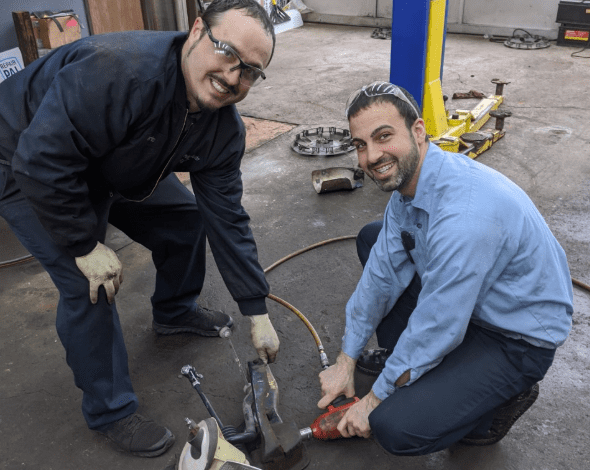 TROY — At the Revive Auto Shop here near the border of Madison Heights, owner Nick Kakish can often be found multi-tasking, working to serve customers in countless ways.

On a quiet Monday, he works with technician Alberto Colón on repairing a delivery van for a gourmet gift basket company, moves from auto bay to auto bay servicing other vehicles, fields a phone call from a potential customer in Denver, Colorado and assists customers at the front desk as part of his first-of-its-kind in Michigan low income auto repair program.

The program, which has been spotlighted on the show What’s Up Detroit?, among other media outlets, has been a life-saver for countless customers who depend on their vehicles to move forward in life, put food on the table and provide for their families.

“You just don’t know how much you have really helped me and blessed me so much,” program participant Danielle Raspberry told Kakish, who recently fixed her  2011 Chevy Impala.

Raspberry is a single mother who has been struggling with tendonitis, carpal tunnel syndrome and fluid on her brain due to serious complications from her first pregnancy.

She said she cried after being approved for the program, which offers low-income customers discounts of up to 35 percent off of their auto repair services depending on their overall earnings and financial situation.

“Now I can make those little payments, for doctor’s appointments and things like that,” she said, adding that her mother had moved down state from northern Michigan to assist her.

“I don’t feel like I have to rely on other people anymore,” she said.

There are many reasons for offering the program, according to Kakish, who accepts and looks over applications submitted to LowIncomeAutoRepair.com in order to determine what level of discount should be given to each customer.

Giving back to the community has been a big part of his mission since founding Revive in 2014.

“We’re not only here just to do automotive repair, we’re here to give back to the community,” he said on What’s Up Detroit? in 2016, “to show to the community the stuff that we’re willing to provide for them and help them as well. So they’re able to go to the appointments they have or take their children to school or go to apply for the next job they have to apply for.”

The program has been so successful that calls come in from places like Florida, California, Colorado, Illinois and other states. Demand was so high the shop had to call Google and request only to be shown in a 15-mile radius of potential customers.

Kakish said he’s hoping to expand his program by offering it to any local auto repair shops that may be interested in working with him, and may even take it nationally in the coming years.

With 38.1 million people living in poverty in the United States in 2018 according to the U.S. Census Bureau, it’s a clear area of need, especially here in Metro Detroit.

“When we established the shop back in 2014, we noticed that we were getting a large range of low income customers, even customers in general that need assistance with auto repairs,” Kakish said.

Kakish, who is a Jordanian American, learned the tools of the trade while helping out his father and uncle at the family’s repair shop.

Now, after going through his own struggle that began with losing his engineering job because the company he worked for went bankrupt, he’s found a way to give back that continues to attract attention both locally and nationally.

“(The program) helps out big time,” he said. “For me to accomplish helping to get the Detroit and Metro Detroit residents back on their feet, knowing their cars are safe and back on the road, it’s a big step for me, knowing that I have accomplished a task.”

The shop specializes in exotic and foreign cars. Its website can be found at ReviveAutoRepair.com or LowIncomeAutoRepair.com. Applications for the program take about 60 seconds to fill out, Kakish said.