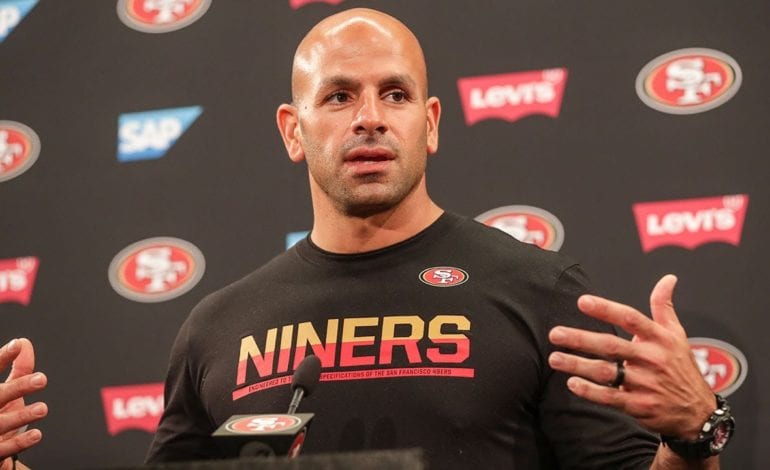 MIAMI, FL — The NFL’s San Francisco 49ers will be led by one of Dearborn’s own in their contest against superstar quarterback Patrick Mahomes and the Kansas City Chiefs, as rising star coach Robert Saleh will take the field in hopes of winning his second Super Bowl title as an assistant.

Saleh serves as defensive coordinator for the 49ers, who won the NFC Championship over the Green Bay Packers two weeks ago and finished with a 13-3 record during the regular season. The 49ers will face Kansas City at Super Bowl LIV in Miami on Sunday at 6:30 p.m.

A 1997 graduate and former player at Fordson High School in Dearborn, Saleh, 40, is considered to be one of the NFL coaching profession’s biggest rising stars. He won his first Super Bowl title as an assistant coach with the Seattle Seahawks and credits his Fordson and Dearborn roots for helping to instill his love of the game.

“It’s a very unique school,” Saleh said about Fordson to Yahoo! Sports this week, prior to the biggest annual sporting event in the world, which will be broadcast on Fox.

“It’s a very unique city. But it is a city with an amazing heart that just loves football.”

Saleh, a Lebanese American who will make history as the first person of Arab American descent to serve as a coordinator for a Super Bowl team, said he loves football because of its universal appeal, which has taken root in the Arab American community over the past few decades.

“It’s a fun sport,” Saleh said. “You get to run around and hit people and not get in trouble.”

Saleh’s father, Sam, played linebacker in the 1960s, earning a scholarship to Eastern Michigan University. Saleh followed in his father’s footsteps and began to expand on his legacy, playing tight end at Northern Michigan University while earning a degree in finance. His brother David, a fellow championship winning football coach with Fordson roots, has been handling the high demand for tickets in the lead-up to the big game.

“The east side of Dearborn is a blue collar area and I think football just has always connected with people there,” head coach Fouad “Walker” Zaban, who has coached Fordson for the past 14 seasons, told Yahoo! Sports.

“The community just rallies around football. You’d have to come here to even understand it.”

The community should be proud to see Saleh take the field on Sunday, according to Zaban.

“It’s great that he’s from our community and great that he’s Arab American,” said Zaban, whom Saleh often visits with upon his trips home. “But the thing about Robert that I think is being lost is the kind of person that he is. He’s a terrific, down-to-earth human being. He’s a big honcho now in the NFL, but you’d never know it. He’s a family man, he loves his community and he loves Fordson High School.”

“I am very proud of where I come from and the high school I attended,” Saleh said. “The people of Dearborn are just trying to assimilate and be part of this country and make a living just like everybody else.”

On Sunday, his second-ranked defense will go up against the former MVP Mahomes in hopes of winning the sixth championship in the 49ers’ storied history.

Some have questioned why Saleh hasn’t been given a head coaching job prior to the big game as many coordinators for Super Bowl teams have in the past. He interviewed with the Cleveland Browns in San Francisco in early January.

“I just go about my business best I can,” Saleh told the Chicago Tribune. “Judge me for who I am, not for my ethnicity.”