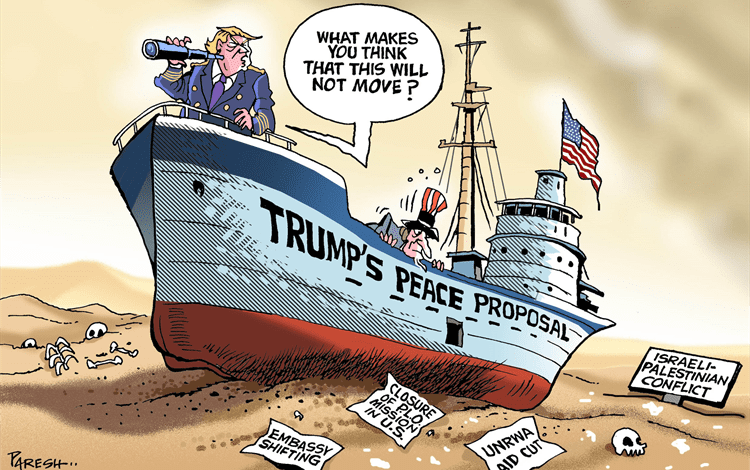 Donald Trump’s long-awaited “deal of the century” between Israel and Palestine essentially gives Israel’s far right coalition government everything it wanted. This Middle East “peace” deal allows Israel to annex vast stretches of the Palestinian West Bank (which has been under Israeli military occupation since 1967) into Israel, including all of the illegal Jewish-only settlements in areas colonized by Israeli settlers as well as Arab East Jerusalem and the Jordan Valley. Palestinians would be granted limited autonomy in a series of largely urban enclaves surrounded by the expanded borders of Israel, with Israel still controlling Palestinian borders, immigration, security, airspace, aquifers and the electromagnetic spectrum.

The United Nations Charter and U.N. Security Council resolutions 242 and 338 — which previous U.S. administrations insisted were to be the basis of a peace settlement — explicitly forbid any nation from expanding its territory by military force. But Trump’s proposal allows Israel to do just that.

In addition, the Fourth Geneva Convention prohibits any occupying power from transferring its civilian population onto territories seized by military force. United Nations Security Council resolutions 446, 452, 465, 471 and 2234 have explicitly recognized the application of the Fourth Geneva Convention to Israeli-occupied territories, as does a landmark 2004 decision by the International Court of Justice.

Trump now insists that Israel’s illegal occupation of these territories is, in fact, legal.

The proposal was praised not only by right-wing Israeli Prime Minister Benjamin Netanyahu, who is currently under indictment on multiple charges of corruption, but also by his supposedly more “moderate” rival, Benny Gantz, who called Trump’s plan “a significant and historic milestone” and said, “immediately after the elections, I will work toward implementing it.”

Not all Israelis were supportive, however. Hagai El-Ad, executive director of the Israeli human rights group B’Tselem, noted how the future for Palestinians under the plan “is not rights or a state, but a permanent state of Apartheid. No amount of marketing can erase this disgrace or blur the facts.”

Similarly, Nimrod Novik, a former aide to former Israeli Prime Minister Shimon Peres, who engaged in years of negotiations with the Palestinians, said, “It’s worse than any of us could anticipate.”

Trump’s plan essentially gives the green light to unilateral Israeli annexation of large swathes of occupied territory, which would bring worldwide condemnation, but the Trump administration has promised to veto any initiatives at the United Nations to criticize such a flagrant violation of the U.N. Charter.

Meanwhile, U.S. Democrats are divided. House Foreign Affairs Committee Chairman Eliot Engel (D-NY) spoke positively of the proposal, and House Speaker Nancy Pelosi (D-CA) said that there were “some areas of common ground” in Trump’s plan, adding, “If there’s a possibility for peace we want to give it a chance.”
By contrast, Sen. Elizabeth Warren (D-MA) condemned the move on Twitter:

Trump’s “peace plan” is a rubber stamp for annexation and offers no chance for a real Palestinian state. Releasing a plan without negotiating with Palestinians isn’t diplomacy, it’s a sham. I will oppose unilateral annexation in any form — and reverse any policy that supports it.

Any acceptable peace deal must be consistent with international law and multiple U.N. Security Council resolutions. It must end the Israeli occupation that began in 1967 and enable Palestinian self-determination in an independent, democratic, economically viable state of their own alongside a secure Israel. Trump’s so-called “peace deal” doesn’t come close and will only perpetuate the conflict. It is unacceptable.

Such criticism, however, is a shift from previous Democratic presidential candidates. 2016 Democratic nominee Hillary Clinton repeatedly referred to parts of the occupied West Bank as “Israel”, engaged in photo-ops at Israeli settlements and attacked the International Court of Justice for its near unanimous ruling (save for the U.S.-appointed judge) that Israel’s de facto annexation of the West Bank to incorporate illegal settlements was a violation of the Fourth Geneva Convention. Similarly, 2004 Democratic nominee and former Secretary of State John Kerry insisted that questions regarding Israeli violations of international humanitarian law in the occupied West Bank be addressed in Israeli domestic courts, thereby effectively recognizing Israeli sovereignty.

The Trump administration has promised to veto any initiatives at the United Nations to criticize such a flagrant violation of the U.N. Charter.

The 2016 Democratic platform neither criticized nor even mentioned the Israeli occupation and illegal settlements. Indeed, the platform pegged challenges by the United Nations and others to the occupation and settlements as efforts to “delegitimize Israel.”

The platform stated that Jerusalem “should remain the capital of Israel”, with nothing about Palestinians’ aspirations that the city serve as the capital of their country as well. The platform also praised Israel’s supposed “democracy, equality, tolerance and pluralism” — which would be news for Palestinians in the occupied West Bank who are forced into crowded enclaves surrounded by Israeli settlements and military encampments, having their homes and farmland repeatedly bulldozed, being terrorized by armed settler militia and unable to move from town to town without going through Israeli checkpoints on segregated roads.

The last serious efforts to curb Israel’s settlement expansion and creeping annexation was under President George H.W. Bush in 1991, but opposition from leading Democrats — including 1992 Democratic presidential nominee Bill Clinton — led the Bush administration to essentially give up on its efforts. Under President Clinton, the United States began indirectly subsidizing Israeli settlements and, in the July 2000 summit at Camp David, unsuccessfully pushed the Palestinians to accept Israeli annexation of the majority of the settlement blocs.

Even under the Obama administration — which formally recognized the need for Israel to stop expanding settlements and allowing for the creation of a viable Palestinian state alongside Israel with borders approximating those prior to the 1967 Israeli conquest — U.S. policy was that there would be no pressure on Israel to change its policies. Conditioning any of the annual billions of dollars in U.S.-taxpayer subsidies to the Israeli government was ruled out; indeed, U.S. aid reached record levels as settlement expansion increased. The United States abused its veto power to block the United Nations from pressuring Israel to abide by its international legal obligations to end the occupation and colonization of occupied territories. U.S. pressure was placed on foreign governments and U.N. agencies, including withholding U.S. economic support, to not recognize Palestinian statehood. And there was active opposition to anti-occupation civil society initiatives — such as campaigns of boycott, divestment and sanctions (BDS).

While the Trump administration’s support for formal Israeli occupation is unprecedented and dangerous, it will likely change little on the ground.

U.S. policy under both parties has been that any peace settlement is contingent on the voluntary agreement of Israel’s right-wing government, which has long made clear that it is unwilling to withdraw from most of the occupied territories or stop the dramatic expansion of settlements. There was a bipartisan consensus which ignored the fact that even if one were to assume that both Israeli Jews and Palestinian Arabs have equal rights to peace, security and viable statehood, there was a gross asymmetry in power between the occupying power and those under occupation, and that there was an inherent contradiction between the United States serving as the chief mediator in the “peace process” and being the primary military, economic and diplomatic supporter of the occupier.

As a result, while the Trump administration’s support for formal Israeli occupation is unprecedented and dangerous, it will likely change little on the ground. Anyone who has traveled in the West Bank from Israel notes that Israel effectively treats the settlements and surrounding lands as part of the country anyway, and it was becoming increasingly obvious that the boxed-in enclaves controlled by the Palestinian National Authority could never form the basis of a viable nation-state. As El-Ad noted, “Tomorrow, there will still be 14 million people living between the Jordan River and the Mediterranean Sea, five million of them Palestinian subjects who have no political rights” under the rule of “a government that works relentlessly to advance the supremacy of one people at the expense of the other, while continually trampling its rights underfoot.”

– Stephen Zunes is a professor of politics and coordinator of Middle Eastern studies at the University of San Francisco.