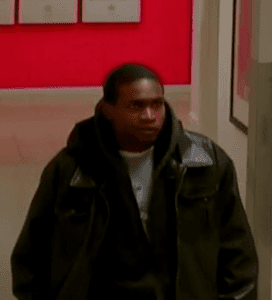 A photo of the suspect released by the Dearborn Police Department.

DEARBORN — Dearborn Police are investigating an alleged incident exposure incident at the Macy’s in Fairlane Town Center that occurred on January 10 at approximately 7 p.m.

During the incident two women were in a bathroom when a Black male believed to be in his early 30s exited one of the stalls with his genitals exposed, a press release said.

The two women screamed at the man and he fled the bathroom into the mall area. Officers searched, but were unable to locate the man.

“This type of behavior that victimizes women in our community is totally unacceptable,” said Dearborn Police Chief Ronald Haddad. “We will continue to utilize all resources until this suspect is brought to justice.”

Macy’s said in a statement that they “take these situations very seriously.

“We are committed to providing a safe and secure shopping environment and ensuring all customers and colleagues are treated with respect and dignity,” the statement continued. “We are cooperating with the Dearborn Police Department and are unable to provide any additional information, as this is an ongoing investigation.”

Anyone with information as to the identity of the subject is urged to call the Dearborn Police Department at 313-943-2241.