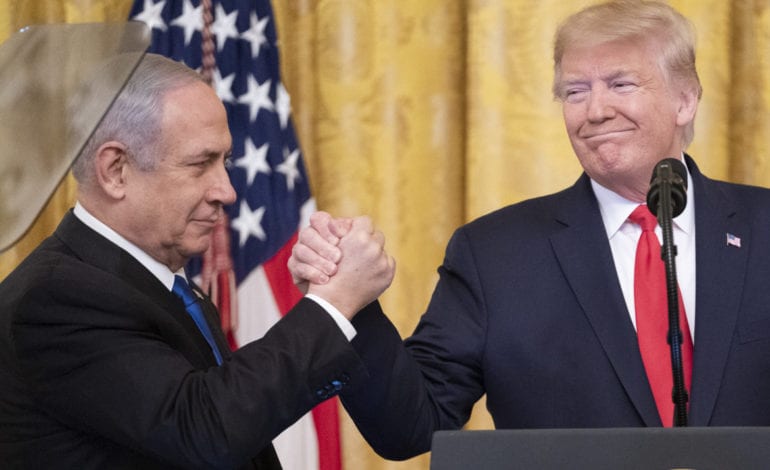 Standing triumphantly beside Trump, Israeli Prime Minister Benjamin Netanyahu must have surely understood that the timing of the announcement, was tailored especially to fit the embattled Israeli leader's domestic agenda.

After several postponements, President Trump has finally revealed the details of his Middle East plan, dubbed “Deal of the Century”, in a press conference in Washington on January 28.

Standing triumphantly beside Trump, Israeli Prime Minister Benjamin Netanyahu must have surely understood that the timing of the announcement, only a few weeks before Israel’s third general elections in one year, was tailored especially to fit the embattled Israeli leader’s domestic agenda.

Consisting of 80 pages, 50 of which are entirely dedicated to the plan’s economic component, the document was a rehash of previous Israeli proposals that have been rejected by Palestinians and Arab governments for failing to meet the minimum standards of justice, equality and human rights.

Former Palestinian negotiator Saeb Erekat contended in an interview that the plan is not even American, but an Israeli one.

“What you heard last night from Trump is what I heard from Netanyahu and his negotiating team in 2011-2012,” Erekat said. “I can assure you that the U.S. team did not make a single word or comma in this program. I have the protocols and I am willing to reveal to you what we have been offered. This is the plan of Netanyahu and the settler council.”

It was no surprise, then, to read the reaction of Palestinian Authority (PA) President Mahmoud Abbas, who assigned Trump’s plan to the “dustbin of history.”

As expected, Trump has granted Netanyahu everything that he and Israel ever wanted. The American vision for Middle East “peace” does not demand the uprooting of a single illegal Jewish settlement and recognizes Jerusalem as Israel’s “undivided” capital. It speaks of a conditioned and disfigured Palestinian state that can only be achieved based on vague expectations; it wholly rejects the Right of Return for Palestinian refugees and fails to mention the word “occupation” even once.

Obviously, only Israel benefits from the U.S. plan; the Zionist discourse, predicated on maximum territorial gains with minimal Palestinian presence, has finally prevailed. Every Israeli request has been met, to the last one. Meanwhile, Palestinians received nothing, aside from the promise of chasing another mirage of a Palestinian state that has no territorial continuity and no true sovereignty.

Palestinian concerns continue to be ignored, as Palestinian rights have been ignored for many years, even during the heyday of the “peace process” in the early and mid-1990s. At the time, all fundamental issues had been relegated to the “final status negotiations”, which have never taken place.

The “Deal of the Century” merely validated the status quo ante as envisioned and unilaterally carried out by Israel.

That said, Trump’s plan will fail to resolve the conflict. Worse, it will exacerbate it even further, for Israel now has a blank check to speed up its colonial venture, to entrench its military occupation and to further oppress Palestinians, who will certainly continue to resist.

As for the economic component of the plan, history has proven that there can be no economic prosperity under military occupation. Netanyahu, and others before him, tried such dubious methods, of “economic peace” and such, and all have miserably failed.

Time and again, the U.N. has made it clear that it follows a different political trajectory than that followed by Washington, and that all U.S. decisions regarding the status of Jerusalem, the illegal settlements and the Golan Heights are null and void. Only international law matters, as none of Trump’s actions in recent years have succeeded in significantly altering Arab and international consensus on the rights of the Palestinians.

The Palestinian leadership cannot be absolved from its responsibility towards the Palestinian people, and its unmitigated failure to develop a comprehensive national strategy.

Immediately after Trump announced his plan, Abbas called on all Palestinian factions, including his rivals in the Hamas movement, to unite and to develop a common strategy to counter the “Deal of the Century.”

Knowing that the U.S.-Israeli plot was imminent, why did Abbas wait this long to call for a common strategy?

National unity among Palestinians should never be used as a bargaining chip as a scare tactic, or as a last resort option aimed at validating ineffectual Abbas in the eyes of his people.

The PA is now facing an existential crisis. Its very formation in 1994 was meant to marginalize the more democratically-encompassing Palestine Liberation Organization (PLO).

According to the new American diktats, the PA has already outlasted its usefulness.

As for Israel, the PA is only needed to maintain “security coordination” with the Israeli army, which essentially means ensuring the safety of the illegal and armed Jewish settlers in occupied Palestine.

While unity among Palestinian parties is an overriding demand, Abbas’ PA cannot expect to maintain this ridiculous balancing act: Expecting true and lasting national unity while still diligently serving the role expected of him by Israel and its allies.

While Trump’s sham “plan” does not fundamentally alter U.S. foreign policy in Israel and Palestine — as U.S. bias towards Israel preceded Trump by decades — it has definitely ended the so-called “peace process” charade, which divided the Palestinians into “moderate” and “extremist” camps.

Now, all Palestinians have become “extremists” from Washington’s viewpoint, all equally shunned and marginalized.

Abbas would be terribly mistaken if he thinks that the old political discourse can be saved, which was, oddly enough, written in Washington.

The problem with the Palestinian leadership is that, despite its frequent protestations and angry condemnations, it is yet to take independent initiatives or operate outside the American-Israeli paradigm.

And this is the Palestinian leadership’s greatest challenge at this stage. Will it move forward with a Palestinian-centric strategy or persist in the same place, regurgitating old language and reminiscing of the good old days?