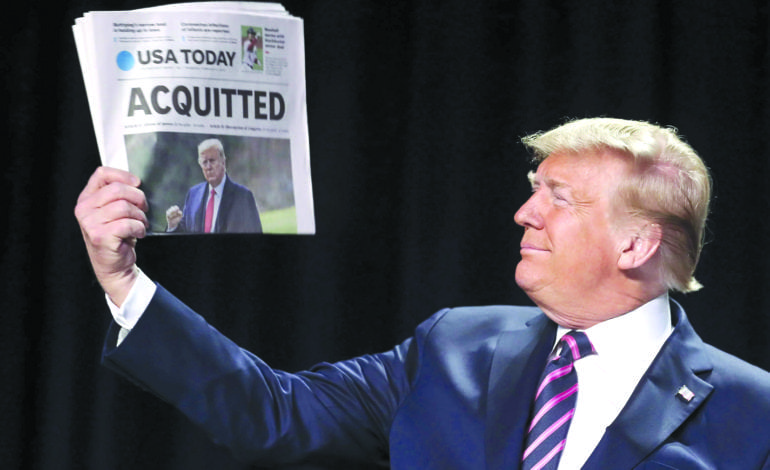 WASHINGTON, D.C. —Just a day after his State of the Union address to the nation, the Senate cast its vote to acquit President Trump of impeachment charges on Wednesday, making this the third such trial in U.S. history with a similar outcome. No president has ever been removed by the senate.

The final tally shows the Democrats’ impeachment team was unable to sway enough Republican voters to their side, with 52-48 favoring acquittal on abuse of power and 53-47 on obstruction charges. Convicting the president would have taken a two-thirds “guilty” vote.

House Democrats had accused the president of engaging in a pressure campaign to force the Ukrainian government to investigate his political rival, former Vice President Joe Biden. The obstruction charges stemmed from the administration’s refusal to allow aides and staff from testifying and aiding in the investigation.

The vote to acquit was quick, and as predicted, Senators failed to hear from key witnesses such as John Bolton during the trial due to a lack of votes. Senators stood at their desks during roll call and gave their votes. Notable was Utah Republican Mitt Romney’s guilty vote on the abuse of power charge, breaking from the rest of the GOP. He voted “not guilty” on the obstruction charge. Romney had previously expressed interest in hearing from witnesses.

AP reports that Trump’s approval rating, which has generally stayed consisted in the mid-to low-40s, hit a new high of 49 percent in the latest Gallup polling, which was conducted as the Senate trial was drawing to a close. The poll of 1,033 adults conducted Jan. 16-29 found that 51 percent of the public views the Republican Party favorably, the first time the GOP’s number has exceeded 50 percent since 2005.

“Contrary to the president’s remarks this evening, this administration has been relentless in its efforts to take health care away from Michigan families. Health care is personal—not political,” the statement said. “That’s especially true for Michigan’s Andrea Pietrowsky, who joined me tonight as my guest at the State of the Union.

“Her 5-year-old daughter, Louisa, was born with a severe congenital heart defect and has undergone three major surgeries. Without the Affordable Care Act, Louisa would likely be uninsurable and her family would face bankruptcy. Andrea is concerned about her family’s future and the future for families across our state. Health care is a basic human right and I remain focused on protecting care and lowering costs for Michigan families.”

“As an officer in the U.S. Navy Reserve and as a U.S. Senator, I took an oath to support and defend the U.S. Constitution. After solemn consideration of the facts and evidence presented to the Senate, I have concluded that the president violated his oath of office and betrayed the public trust by putting his own personal and political interests before the people of Michigan and our country.

“The evidence presented to the Senate by the House of Representatives was compelling and was not effectively refuted by the President’s lawyers. The facts clearly showed the president abused the power of his office by illegally holding up critical military aid to extort Ukraine, a vulnerable ally at war with Russia. The president leveraged the good will of the American people and conditioned release of the aid on Ukraine announcing an investigation that would falsely discredit his political rival. His actions were not an effort to further official U.S. foreign policy, but rather an unbridled effort to benefit his own re-election campaign by using taxpayer money for a corrupt purpose. The president also engaged in an unprecedented cover up of his activities by stonewalling and obstructing congressional oversight, blocking relevant key witnesses and withholding documents necessary for full transparency.

“The framers of the Constitution rightly feared that unchecked power by a president, along with corrupt foreign influences, would pose a grave threat to our republic. The president’s conduct violated the American people’s trust, threatens our democracy, and I will vote to hold him accountable for his actions as demanded by the U.S. Constitution. If we do not stand up and defend our democracy during this fragile period — then the Senate is allowing this president and future presidents to have unchecked power without accountability.”