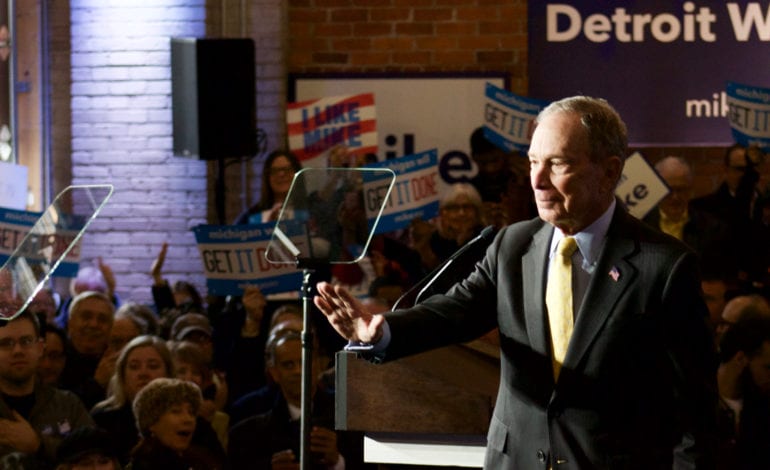 DETROIT – Former New York Mayor Michael Bloomberg made a campaign stop in Detroit on Tuesday, as other Democratic presidential candidates eyed results in Iowa on the road to New Hampshire.

Held in a repurposed industrial building in Eastern Market, the rally was organized by Bloomberg’s campaign, which has expanded in both size and expense for the late-comer candidate. The afternoon featured special guest speaker Wayne County Executive Warren Evans, who whole-heartedly said the three-term mayor of the most populous U.S. city had a real chance of beating President Trump in the upcoming election.

“I’m delighted to see so many of you from Wayne County here today,” said Evans to a sizable audience of local Bloomberg supporters and media. “We have a candidate here who according to polls can beat Trump, and that’s definitely what matters to me.

“A candidate who has gone above and beyond in his private life and his philanthropic life and tackled issues like climate change, gun control, public health and housing. He’s done it. How many times have we heard people talk about what they would do, could do or should do?”

Bloomberg boasted that his record showed that he decreased inequality in his own city during his time as mayor. Some have a different vision of housing security in New York, of course, a city where financial and real-estate transnational capital leaves many fighting for housing rights

Evans spoke of Bloomberg’s business acumen and financial success as a measure of his quality as a candidate. He said he was moved by Bloomberg’s recent speech in Tulsa, Oklahoma, where he commemorated Tulsa’s race riots of 1921, in which scores of Black residents and businesses were attacked by mobs of White residents. Evans insisted that Bloomberg had “executive ideas” of how to fix inequalities that are “baked in to the American system.”

Ironically, Evans said Bloomberg’s executive history made him uniquely suitable for the presidency, in that he wouldn’t wait for congressional approval and make executive decisions, something Democrats have criticized President Trump for in the past.

Bloomberg talked about ramping up his campaign, including spending more money in key swing states like Michigan, taking a jab at Monday’s Iowa caucuses debacle in which technical difficulties delayed results.

“While all the Democratic candidates have flown to New Hampshire now, I am here in Michigan because this is a state we will have to win in November if we’re going to beat Donald Trump,” he said to a cheering crowd. “He knows that, which is why he’s campaigning here.”

Bloomberg said he could take the president’s insults, which he routinely lobs at Democratic candidates, and that someone has to stand up for every American. He honed in on his ability to beat Trump in the upcoming election, signaling that his record showed he was a “doer.”

Bloomberg reiterated Evans’ point, boasting that his record showed that he decreased inequality in his own city during his time as mayor, specifically making housing more affordable for lower-income New Yorkers. Some have a different vision of housing security in New York of course, a city where financial and real-estate transnational capital leaves many fighting for housing rights.

The urban planning scholar Samuel Stein talks of a city managed as a “luxury product” under Bloomberg to be sold and hyper-developed. Bloomberg, he argues, was no different from any other politician who depended on powerful real-estate interests to bolster electoral campaigns, a trend seen in communities across the country. Stein describes a Bloomberg who was an unapologetic advocate for the rich, who, he insisted, were essential to the city’s well being.

Together with his city planners, one of whom specialized in real-estate investment while working for petro-billionaire and Trump associate Robert Bass, Bloomberg created a boom in private construction with significant public backing. The result was the rezoning of poorer neighborhoods for increased development at the detriment of low-income residents, many Black and Brown, in places like Downtown Brooklyn, a previous hub of Black-owned small businesses.

Bloomberg’s legacy is one of appeasing not only big finance and real-estate, but his wealthy, White voting base whose property values benefited from his urban policies while increasing “livability” for them alone. His “self-made” billions come from his firm’s development of specialized computing tools to aid gigantic speculative finance companies in conducting high speed trading. An ivy-league graduate, Bloomberg maintained his service to the wealthy of the city during his term as mayor.

His stop in Detroit, itself no stranger to housing crisis and inequality, is apropos considering Bloomberg has been on the trail apologizing to multiple Black audiences for policies like the brutal and racist “stop-and-frisk” practices of his police force. Evans’ support may help the campaign get ahead in Wayne County. An elderly Detroiter and Bloomberg supporter told The Arab American News outside the rally she was aware of this record, but liked the former mayor for reflecting and changing his approach.