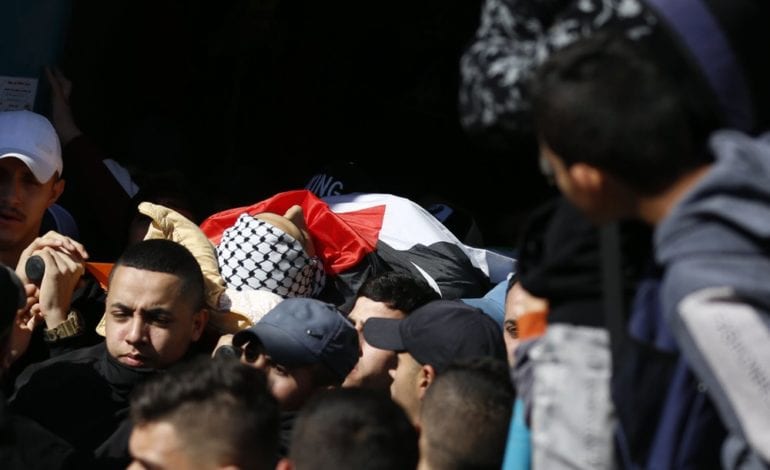 An AP photo shows Palestinians carrying the body of 19-year-old Yazan Abu Tabekh, during his funeral in the West Bank city of Jenin on Thursday. The young Palestinian was killed by Israeli forces.

DEARBORN – The Michigan Task Force for Palestine hosted an indoor rally in solidarity with the Palestinian people. The rally was held on Wednesday at the Greenfield Manor Banquet Hall in Dearborn.

Attendees of the rally protested President Trump’s declaration of the “Deal of the Century,” which they call a pseudo peace plan to end the Arab-Israeli conflict. The organization said the proposal was soundly rejected by all Palestinians as well as by peace advocates and by advocates of a world governed by international law and not by ideology or political expediency.

It also said the “peaceful solidarity event” served as an opportunity for the Arab American and Muslim American community, as well as for peace and justice advocates, to express their support for a just and lasting peace in Palestine.

Khalid Turanni, an American-Palestinian activist, emceed the event which saw more than 100 area residents. He spoke of the dire need for solidarity with Palestinians in a time of important challenges facing many in the region.

“(Showing up) is the least that Palestine demands from us, from all of us,” Turanni said. “The challenges that we are facing, not only as Palestinians, not only as Arabs, not only as Muslims and Christians in Palestine, but as human beings.”

Turanni said Israel’s plans for the region, backed by the Trump administration, amount to apartheid, ethnic cleansing and dispossesion while the world watches and acquiesces. He said anyone who promotes, excuse or peddles the “theft of the century” must be identified as a participant and a partner of the racist, Zionist project.

Hassan Nawaj, long-time activist and founder of Palestine Cultural Office, said those that opposed occupation fought with “every mean that is at our disposal.”

“Our dance, our songs, our poetry, our art continue to survive and thrives under occupation, in spite of the pain our people continue to face,” he said. “That’s who we are … and we will continue to struggle today (until) Mahmoud Abbas is forced to adopt the popular resistance movement.”

The Arab American News spoke to Mohammed Abdul Salam of the Palestine Aid Society (PAS) on Thursday to discuss Trump’s Mid East peace plan. PAS is a charitable organization that was established in 1978 that once had chapters in every major city in the U.S. The organization has had setbacks in the wake of 9/11 but still exists in a few cities, with volunteers working from homes, outside of brick and mortar offices.

“U.S. presidents since 1967 have supported a two-state solution, under the umbrella of negotiations between Palestinians and Israeli,” Abdul Salam said. “They say they are “honest brokers” but most, if not all of the time, they have sided with Israel.

He said that in spite of this, there was a difference in approach between previous administrations and Trump’s dealings with Benjamin Netanyahu’s right-wing government.

“The previous presidents were not as blunt as Trump,” he said. “From the beginning, Trump said he’s going to broker a deal, thinking it would be like buying a building in Dubai. This is because he is not a politician.”

Abdul Salam said that the details in the peace plan, available to be read by anyone, show that the plan was in fact created by Netanyahu for Zionists, evident in details about borders, neighborhoods and towns that neither Trump nor Jared Kushner would ever have a clue about.

“If they cannot find one Palestinian to sign off on this deal, this deal is going no where,” he said. “And so far not a single Palestinian dares to support it, regardless of their position in that community.”

Abdul Salam is determined that only Palestinians, and no other entities in the Middle East, have the right to their political future, and that Kushner’s attempt at drawing support with economic aid ignores the fact that the true economic hurdle facing Palestinians is occupation. He also called out Palestinian President Mahmoud Abbas for being complicit in collaborating with Israel and the U.S. on security issues. Abbas recently said at an emergency meeting of Arab nations in Cairo that his government was cooperating with the CIA and Israel against terrorism.

“The only terrorism we face is from Israel and Israeli settlers in our land,” Abdul Salam said.