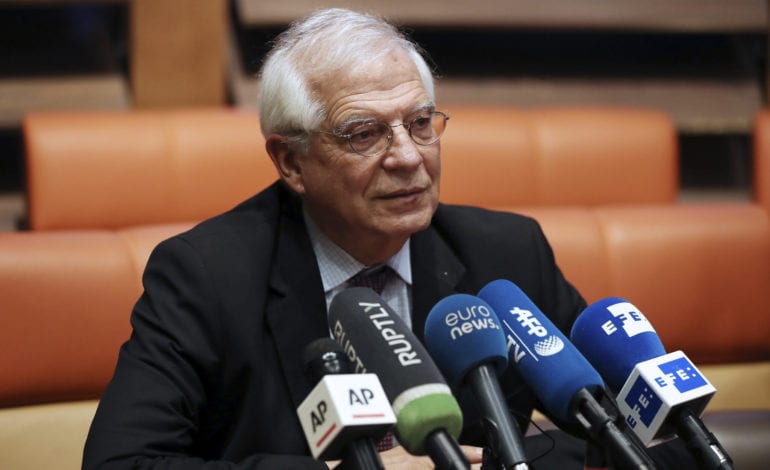 BRUSSELS – The European Union rejected parts of President Trump’s peace plan for the Middle East on Tuesday, prompting an angry response from Israel, which has strongly backed the U.S. proposal.

The plan, announced by Trump last week with Israeli Prime Minister Benjamin Netanyahu at his side, was rejected outright by the Palestinians. It would give Israel most of what it has sought during decades of conflict, including nearly all Palestinian land on which it has built settlements.

The EU, which often takes time to respond to international developments because of a need for unanimity among its 27 members, had said last week that it needed to study the Trump plan before it would give its verdict.

It made its conclusions public on Tuesday in a statement from EU foreign policy chief Josep Borrell, who said Trump’s plan departs from “internationally agreed parameters.”

“To build a just and lasting peace, the unresolved final status issues must be decided through direct negotiations between both parties,” Borrell said, noting the issues of the borders of a Palestinian state and the final status of Jerusalem were among those still in dispute.

Steps by Israel to annex Palestinian territory, “if implemented, could not pass unchallenged,” Borrell said.

Israel responded sharply to the remarks by Borrell, a Spaniard in office since the start of December.

“The fact that the high rep of the EU, Josep Borrell, chose to use threatening language towards Israel, so shortly after he assumed office & only hours after his meetings in Iran, is regrettable &, to say the least, odd,” tweeted Israeli Foreign ministry Spokesman Lior Haiat.

“Pursuing such policies & conduct is the best way to ensure that the EU’s role in any process will be minimized.”

The EU policy in the Middle East tends to be cautious, as the bloc includes members with varying degrees of sympathy towards the Palestinians and Israel. Some EU members have already recognized a Palestinian state, although the bloc as a whole says this is a matter to be resolved in peace talks.

The EU condemned Trump’s decision in 2017 to recognize Jerusalem as Israel’s capital, saying Washington had compromised its position as a mediator for peace.