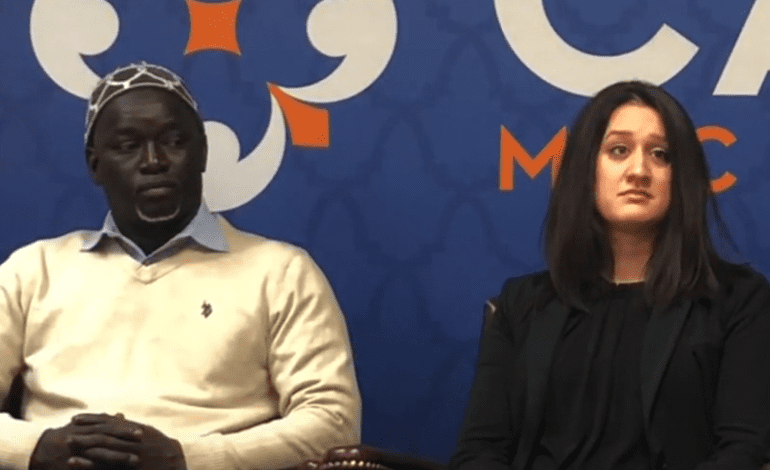 Diao (left) and Dunlap are co-plaintiffs in the lawsuit. - Photo is a video grab

WESTLAND — The West Michigan based Anna’s House restaurant chain is facing a federal lawsuit filed January 30 in U.S. District Court after an accusation that a worker was forced to remove her hijab, among other accusations.

The lawsuit was announced the same day it was filed at a press conference by the Michigan chapter of the Council on American-Islamic Relations (CAIR-MI). The suit alleges that two former workers, a manager and a kitchen manager were fired at the chain’s Westland location without justification.

The workers, Alicia Dunlap and Aliou Diao, were fired on June 17.

The lawsuit states that Dunlap, the manager, was asked to tell a co-worker that she needed to remove her hijab at work. She refused to to inform the worker and instead texted the owner of the chain, Josh Beckett, that he should speak with an attorney to make sure the restaurant’s practices are “legal and ethical”, a report from Mlive.com said. Lawyers for the laid off workers also allege that Beckett told general managers at other Anna’s House restaurants to avoid hiring anyone who wears a hijab. He also is alleged to have said he was considering “purging Westland” according to a report from the Detroit Free Press, and asked Dunlap whether one of the restaurant’s workers wore a “jihad.”

Dunlap also said she was asked to remind two Black workers that they could not dye their hair red. No such requests were given to White workers who dyed their hair, lawyers said.

Beckett allegedly asked another worker at the Westland location whether the kitchen manager, a Senegalese Muslim, prayed at work. Diao routinely prayed in his office in accordance with his religious values.

Lawyers for the fired workers allege the question about praying “targeted (the kitchen manager) because he is Muslim.”

Beckett released a statement about the lawsuit. “Anna’s House is aware of the lawsuit filed today. We have retained counsel and will defend against these claims in Court. Anna’s House has and continues to be a place that employs and serves people of all backgrounds and beliefs.”

The restaurant chain, known for its breakfast food among other items, has locations on the east side of the state in Westland, Farmington and Ann Arbor.

The owner of Anna’s House was also accused of having “taken a public stance which echoes the racial, xenophobic and Islamophobic biases which are at the heart of these unlawful employment practices,” according to CAIR-MI.