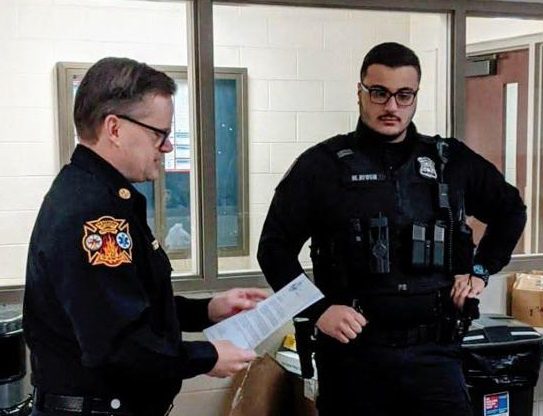 DEARBORN HEIGHTS — Dearborn Heights Police Officer Mehdi Ayoub was honored Feb. 6 for his heroic actions in helping to save the life of a toddler who nearly drowned on Sept. 7.

Ayoub was formally thanked by Fire Chief Dave Brogan, who visited the police department to deliver a letter of recognition. In it, he praises Officer Ayoub for assisting firefighters and EMS technicians at the scene of the incident.

“Officer Ayoub’s taking immediate steps that day and performing rescue breathing techniques on this child was crucial to survival,” Brogan said. “Each member of the crew asked that our brothers and sisters at DHPD be acknowledged for their roles in the successful outcome of this incident.”

On September 7, DHPD were dispatched on an emergency call to a home where a young child was reported to be face down in a koi pond. Ayoub had been administering resuscitative procedures to the toddler.

The child was taken to Children’s Hospital of Michigan in Detroit. Police officers controlled traffic along the route, while fire personnel continued to work toward saving the child as he was being taken to the hospital.

“The actions of Officer Ayoub are representative of the long-standing tradition of cooperation and service to the public shared by the Dearborn Heights Police and Fire departments,” Police Chief Michael Petri said according to the Dearborn Press and Guide.

Ayoub joined the department in July 2018 after previously working with the Dearborn and Livonia police departments. He also worked security detail at Fairlane Town Center.

“Officer Ayoub represents the exceptional men and women who are first responders in the city of Dearborn Heights,” Brogan said. “He has the gratitude of a relieved family, my department, and, I’m certain, a grateful community.”