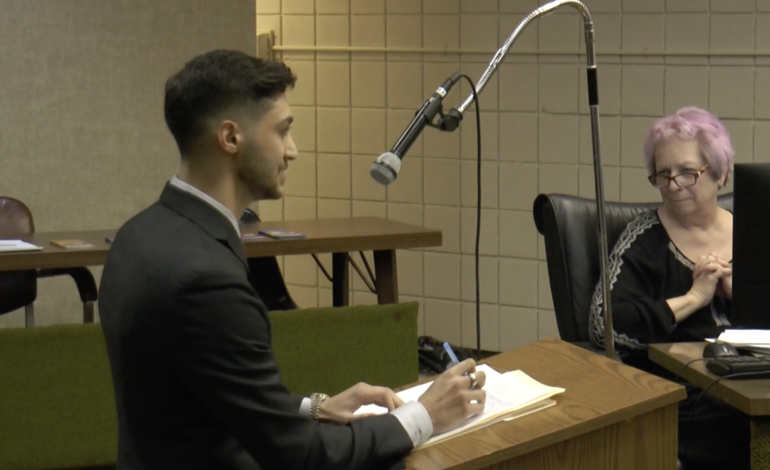 DEARBORN HEIGHTS — Last week, Samer Beydoun, a Dearborn Heights resident with a diagnosed mental illness, was arrested by Dearborn Heights Police and kept in custody for four days without being charged.

Beydoun’s sister Samar Beydoun and attorney Issa Fawaz told The Arab American News that the circumstances around his arrest are deeply concerning and shed light on the police department’s wrongful treatment of Beydoun and possibly other residents.

Fawaz and Samar Beydoun spoke at Tuesday’s Dearborn Heights City Council meeting about the incident, with details about the police department and city employees’ dismissive response to their inquiries concerning the arrest. The testimonies were met by shock and outrage by residents and Council members alike, with the mayor saying that an investigation was ongoing.

Beydoun said that on Monday, Feb. 3, her 43-year-old brother was at Dearborn Heights City Hall to pay his property taxes. Samer Beydoun, the father of two, currently receives disability and has been diagnosed with paranoid schizophrenia. According to his sister, while there, he approached Mayor Daniel Paletko’s office to have his library privileges reinstated.

After being asked by the secretary to have a seat, he was approached by police officers who asked him to leave the premises. Beydoun said her brother confirmed with the officers that they ordered him to leave and that he was free to walk out of the building.

As Samer Beydoun was leaving the building, the officers decided to search him, something his sister said violated his rights against illegal search and seizure. He was subdued by force and suffered a neck and head injury. Samar Beydoun said children from a nearby school witnessed her brother’s arrest.

“(My brother) was not a threat and was not committing a crime,” she said. “There was no reason to even want to search him.”

Beydoun claims her brother was denied a phone call after being taken into custody. He was also denied medical treatment, which he requested for the approximately 69 hours that he was held. He was given his medication around 36 hours after his arrest. Bail was set, but no receipt of payment was given when it was paid by his brother on Thursday, the day he was finally released.

Beydoun said her brother had been arrested before and held without charges and that the family was unable to obtain a bond receipt at that time either. She also said he may have been afraid of police after years of harassment from ex-Dearborn Heights police chief Lee Gavin, a neighbor who allegedly used disparaging remarks, calling him “Crazy Sam.”

Beydoun said the police department has been called to situations involving her brother in the past and has been aware of his mental condition for some time.

Mental illness is a serious issue and to treat (Beydoun) this way is disgusting. He has regressed after this incident. How can he be expected to leave his house now after the police attacked him and threw him in a cell? — attorney Issa Fawaz

Fawaz said he was told by police they planned on holding Samer Beydoun for the full amount of time allowable for felony charges as those charges were being considered. Fawaz was not told what these charges were. He was not allowed to speak to his client, who was never arraigned. He confirmed that no receipt was given upon bond payment, which he found unusual.

“There were no charges,” Fawaz said. “Police told me they would probably charge him with a misdemeanor, (maybe) disturbing the public, but they did no such thing.”

Fawaz is yet to receive an incident report, video or audio. He and Samar Beydoun have both been approached by other residents since the City Council meeting who may have had similar experiences with the department. Last Monday, Fawaz tried to submit a spoliation letter, which federally protects evidence such as surveillance footage from being altered or damaged, when he was told by City Hall staff, including a mail clerk, to “go see the mayor.”

“The staff at City Hall that I have spoken to have been very unpleasant and rude,” Fawaz said. “They didn’t want to accept (the spoliation) letter and wanted me to see the mayor — none of this makes sense to me.”

Fawaz said this is part of an ongoing issue between residents and the police and that he is willing to take measures further and stand up for people like Samer Beydoun. He said he is waiting to see how the city responds at the next City Council meeting.

“This schizophrenic man was finally starting to return to society and was taking his medication and getting better,” he said. “He was finally getting the confidence to be out and wanted to get his library card reinstated because he’s an intelligent guy.

“Mental illness is a serious issue and to treat him this way is disgusting. He has regressed after this incident. How can he be expected to leave his house now after the police attacked him and threw him in a cell?”

The Dearborn Heights Police Department could not be reached for comment at press time.

UPDATE: A representative later said the department was reviewing its procedures and investigating whether those procedures were followed. The department said the safety of residents is paramount and that it is attentive to the Beydoun family’s concerns and wants to ensure all residents are treated with respect and due process. The department is working with residents to create a citizen oversight committee to more effectively handle such concerns in the future.