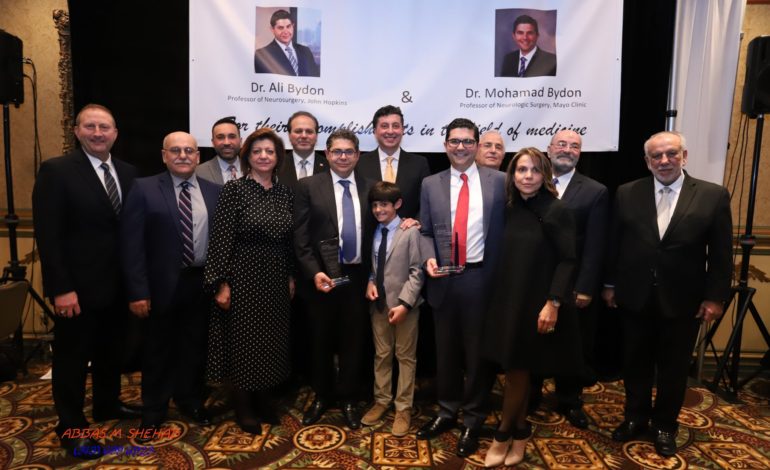 Ali Bydon (front row, fourth from left) and Mohamad Bydon hold awards while surrounded by family and community members at the Bint Jebail Cultural Center, where many were present to recognize the brothers' work. All photos: Abbas M. Shehab

DEARBORN — Brothers Mohamad and Ali Bydon were guests of honor at a packed dinner celebration on Saturday, Feb. 15, where members of Michigan’s Arab American community gathered to acknowledge recent remarkable medical achievements by two of their own.

Both brothers have made significant achievements in their fields. Mohamad is professor of neurological surgery at the Mayo Clinic while Ali is professor of neurosurgery at Johns Hopkins. Mohamad recently made history and received international acclaim by performing an experimental stem cell procedure that helped a paralyzed man walk again. Ali is a respected researcher and has presented his work internationally. He is one of the busiest neurosurgeons at Johns Hopkins Hospital and has been for the past decade.

Nasser Beydoun, chair of the Arab American Civil Rights League, emceed the evening and spoke of the importance of the dinner held at the Bint Jebail Cultural Center, as well as the brothers’ connection with Dearborn and their ancestral town of Bint Jbeil in Lebanon. “Today we are honoring two remarkable individuals,” Beydoun said. “Both are considered pioneers in the field of medicine.

“In honoring them, we are honoring ourselves. We honor our community, we honor our city, our state, our country. We also honor our heritage, (and) our village of Bint Jbeil.”

Fay Beydoun spoke of both the Bydons’ father and her uncle, the late Dr. Hussein Beydoun, who himself was well-known and loved in the community. The brothers grew up in Dearborn after immigrating from Lebanon with their family at a very young age. Ali attended Fordson High School while Mohamad attended Cranbrook Institute in Bloomfield Hills. Doctors Ali and Mohamad Bydon hold plaques given to them by U.S. Rep. Debbie Dingell.

Ali honed in on his Lebanese heritage, connecting his and others’ successes to make the case for how the immigrant experience of the Lebanese diaspora made it particularly suitable for professional success.

“The tendency of Lebanese immigrants to succeed has long been intriguing and written about extensively,” he said. “What is it about this small group of people who have a long track record of success, not just in this country but around the world? The answer in my opinion is multifactorial.”

Ali argued that the ability of many Lebanese to speak multiple languages helps foster creativity, leads to a unique sense of design and aesthetics and primes them for better cognitive wiring. He said that Lebanese immigrants rarely rest on their laurels and have a unique tenacity and determination, and stressful situations galvanize them towards success.

“The most successful Lebanese community in America is right here in this room,” Ali added. “That success is the story of us Dearbornites.” Mohamad talked of the regenerative medicine group he is a part of, which has made tremendous strides in stem cell research. This research is instrumental in the kind of procedures performed on Barr and made his work renowned the world over. The FDA had just approved such a stem cell trial in humans led by Mohamad, of which Barr was the first patient.

“Little things become so meaningful for patients with this condition,” Mohamad said after showing a clip of a jubilant Barr the first time he was freely able to stand up on his feet after the procedure. Wayne County Commissioner Sam Baydoun also spoke at the event. He shared the story of his cousin Mohamad Bydon’s successful trial with the community last year.

“(Celebrating) your accomplishments in the medical field, in the presence of so many Arab American doctors and professionals here tonight, clearly indicates that we belong here and are part of this great American fabric,” he said.