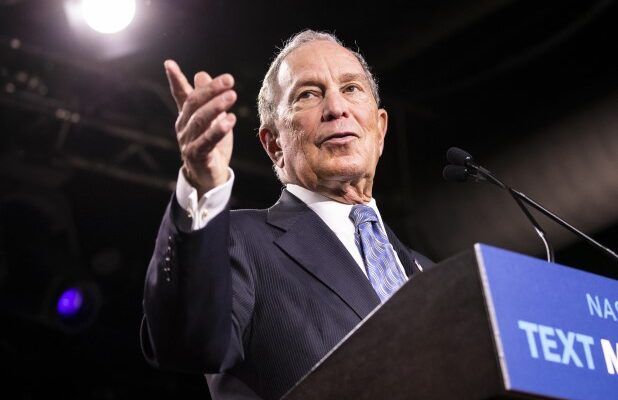 Mike Bloomberg has hired more than 60 campaign organizers in Michigan. Photo via Yahoo!

DEARBORN — Democratic presidential candidate Mike Bloomberg’s campaign has been especially active in Michigan in recent weeks, as the former New York City mayor has been introducing himself to voters ahead of Michigan’s March 10 primary election.

Local Arab American leaders met with Bloomberg national campaign representative Fatima Shama, a Palestinian and Muslim American, and Michigan State Director, Michael Kurts this past Sunday at two separate gatherings, during a month in which Bloomberg has invested heavily in advertising in Michigan, including taking out ads in The Arab American News.

Both the Bloomberg and Bernie Sanders campaigns have begun actively campaigning for and courting the Arab vote in Michigan, with Bloomberg opening up an office in Dearborn to serve both Dearborn and Dearborn Heights. Sanders also opened an office in Dearborn on Thursday, February 20, and has made plans to meet with local Arab American leaders next week.

While Bloomberg’s candidacy has been welcomed by some who believe he has a legitimate chance to unseat president Trump, others are more cautious considering his checkered civil rights background in The Empire City.

“Under then-Mayor Bloomberg’s Muslim spying program, reading an Arab American newspaper in public or even just speaking Arabic would have been justification enough to be surveilled and profiled by the NYPD,” said Scott Simpson, public advocacy director of the Washington, D.C.-based Muslim Advocates organization in a statement.

“Bloomberg is campaigning in the same language he once flagged as a warning sign. The NYPD’s Muslim spying program profiled people based on their ethnic origin, the types of restaurants they went to, the language they spoke or simply whether they attended a mosque.”

During the 78-year-old Bloomberg’s three-term tenure as New York City’s mayor, the NYPD worked with the CIA to deploy teams of undercover agents, known as “rakers”, to monitor residents of Muslim neighborhoods and in some cases to bait them into saying inflammatory things.

“We are very concerned about the surveillance,” said the publisher of The Arab American News, Osama Siblani, at Sunday’s meeting at the newspaper. Siblani added that he expressed concern about the ongoing profiling of Arab and Muslim Americans, who are often placed on watch lists by the government that are extremely difficult to get off of, even when the person hasn’t committed a crime. Sen. Bernie Sanders learns about the issues in Detroit prior to a big rally and an
endorsement from U.S. Rep. Rashida Tlaib. Oct. 28, 2019. – Photo by the Detroit Free Press

“Especially when you’re coming to Dearborn, there should have at least been an apology before working to get our support,” Ayoub told the Detroit Free Press. “He hasn’t taken steps to admit what he did was wrong…He laid the blueprint for surveillance post-9/11.”

With the Democratic winner holding the potential to defeat Trump, whose rhetoric on immigrants, Arab Americans and Muslims has been denounced as discriminatory and racist, the question on the minds of many local Arab Americans is whether Bloomberg or Bernie Sanders has the best chance to defeat the Republican incumbent. Bloomberg’s campaign hopes to build a lasting relationship with the community.

“This was neither the first or last meeting that the campaign will have with the Arab American or Muslim communities,” a spokesperson for the Bloomberg campaign told the Free Press in a statement. “Our team is committed to an ongoing dialogue about issues important to the community and how we can all work together to defeat Donald Trump, who has relentlessly attacked Arab Americans and Muslim Americans through his rhetoric and policies.”

A poll of 845 Michigan residents conducted by Quinnipiac University taken between February 12-18 found that Sanders held a projected 48 percent to 43 percent lead over Trump, while Bloomberg led 47 to 42 percent.

Amer Zahr, a Palestinian American, University of Detroit Mercy law professor and comedian who is also a national surrogate for the Sanders campaign, told The Arab American News that he believes Sanders should be the choice considering his stances on Palestine as well as civil rights.

“Do we sell out our values just go get somebody who might be a little better than Trump?” he asked in regards to Bloomberg’s candidacy. “If we do that, we compromise our values to get with a politician because we think he might beat Trump (and) we cheapen the value and standing of our community.”

Zahr added that Bloomberg also supported the “murderous assault” on Gaza in 2014 by Israel that killed more than 2,000 people. He said that while he believes that meeting with politicians is “fine”, supporting them is another matter entirely and should be kept in perspective. Attorney Nabih Ayad, the founder of the Arab American Civil Rights League in Dearborn, said that while Sanders is well-liked in the community, Bloomberg’s candidacy should not be taken lightly.

He attended both meetings over the weekend and said he believes Bloomberg has a legitimate chance of winning the presidency.

The former mayor already has more than 60 campaign organizers in Michigan and has spent more than $7 million in advertising in the state.

“I like Sanders, I think we all like Sanders,” Ayad said. “The thing is, who’s going to have the big, big money (to take on Trump)?”

He added that Bloomberg has been standing up to fellow New Yorker Trump’s rhetoric on Twitter.

“It’s going to really depend on the voters,” he said. “We’ll see how they fare. “(The Bloomberg campaign) just started campaigning and they’re already number three; it’s definitely something to reckon with.”

Assad Turfe, chief of staff for Wayne County, said that he felt Bloomberg’s representative was “sincere” and that, “she understood the community’s concerns.”

He added that he also likes Sanders, but believes Bloomberg is the Democrats’ best chance of beating Trump and reiterated the importance of meeting with multiple campaigns.