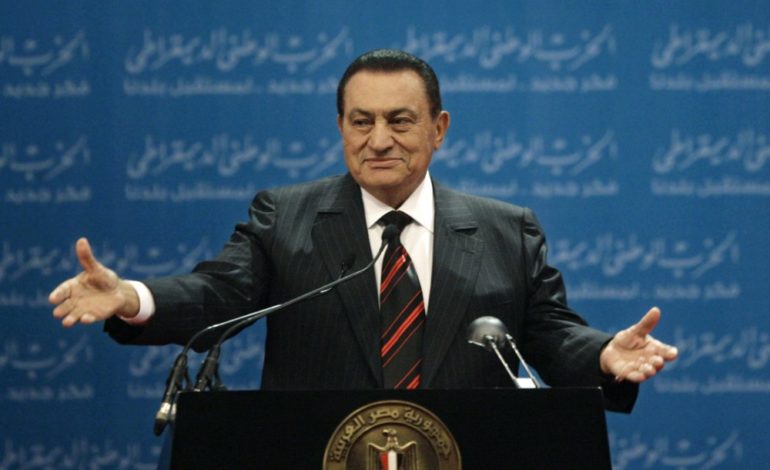 After three decades of rule, Hosni Mubarak was ousted in 2011 after an 18-day protest in Egypt, as part of the greater Arab Spring uprising in the Middle East and North Africa.

CAIRO – Egypt’s state-run television announced on Tuesday that the country’s former leader and autocrat Hosni Mubarak died at the age of 91. After a presidency that spanned three decades, long-time U.S. ally Mubarak was ousted by mass popular protests as part of the Arab Spring uprisings in 2011.

Egypt’s State TV said Mubarak died in a Cairo hospital where he was admitted for surgery. No specifics were given over his health conditions, though his son Alaa announced over the weekend that the former leader was in intensive care following surgery.

Mubarak was born in 1928 in Kafr El-Meselha in Egypt. After years in the Air Force, he became commander of the Egyptian Air Force and deputy minister of Defense. President Anwar Sadat, who would become Mubarak’s mentor, appointed him vice president in 1975. Mubarak would go on to become the fourth president of the country after Sadat’s assassination in 1981.

Israeli Prime Minister Benjamin Netanyahu called Mubarak a “personal friend of mine” and expressed his deep sadness over the news of Mubarak’s death. Mubarak presided over years of peaceful relations between the two countries and attempted to broker peace talks between Israel and Palestine on many occasions.

“(Mubarak) spent his life serving his homeland and the issues of righteousness and justice in the world, with the issue of our Palestinian people at the top of them,” Palestinian President Mahmoud Abbas said.

Keeping Egypt out of military disputes, promoting steady economic prosperity and cracking down on dissent among his people with a brutal police force were hallmarks of his 30-year reign. Mubarak did, however, send troops to aid in the war effort as part of a U.S.-led coalition during the 1991 Gulf War. His government gained financial benefits from this cooperation and strengthened Egypt’s relations with the U.S., Europe and Arab states of the Persian Gulf. Mubarak, Netanyahu and President Obama at the White House in 2010 during Middle East negotiations. Photo: The White House

In 1989, Egypt was readmitted into the Arab League after its membership was suspended due to Sadat’s peace treaty with Israel 10 years earlier. Under Mubarak’s statesmanship, the country would regain its power and influence at the center of the complex political landscape of the Arab world. Because of his diplomatic ties with Israel and his opposition to Islamic fundamentalism, Mubarak was the target of assassination attempts. He survived six attempts on his life.

Mubarak was also known to resist Islamic militancy in his country, which gained strength after his ousting, as the country plunged into a power struggle between the military and the Muslim Brotherhood. Egyptian President Abdel Fattah el-Sissi, who presumed control after a military overthrow of a freely elected leader two years after the Arab Spring protest, praised Mubarak for serving in the Egyptian Air Force during the 1973 war against Israel.

Mubarak was jailed and put on trial for various cases after his overthrow. It was reported that the once powerful and commanding figure cried in protest once he was flown from court to Torah Prison in Cairo. Images of Mubarak on a stretcher in a defendant’s cage were televised the world over.

His sons, Alaa and Gamal, both saw prison time as well for corruption charges. Mubarak himself was set free in 2017 and lived in an apartment in Cairo until his death. He almost saw life in prison after a court sentenced him in 2012 for failing to prevent the killing of hundreds of protesters during the 18-day uprising that led to his resignation. A high court later cleared him of those charges.