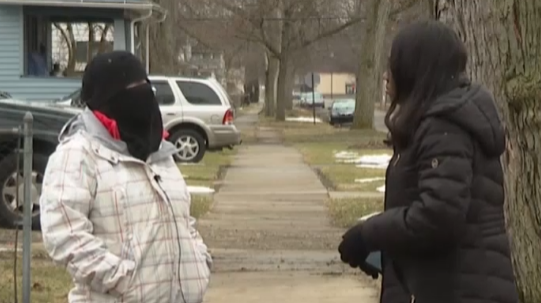 Yasirah Nelson, left, said that that the incident constitutes a hate crime. Photo via WILX-TV/Screen capture

JACKSON — A Muslim woman in Jackson was allegedly attacked because of her religion while walking her dog, according to a report from local station WILX-TV.

The woman, Yasirah Nelson, was walking down North Street near Edgewood in her neighborhood when she heard what sounded like gunshots, and someone yelling anti-Muslim expletives.

“It was infuriating and it was also pretty scary at the same time because I thought someone was shooting at me for the sake of me being Muslim and just for existing,” she said. “I’m from Jackson. I never experienced anything like this. I never thought I would experience anything like this.”

Nelson called 911 and Jackson Police immediately responded to the incident on February 15.

“I was actually very frightened,” Nelson said. “I was on the verge of crying when I called 9-1-1 and the operator calmed me down and she talked with me all the way back to my house.”

Jackson Director of Police and Fire Elmer Hitt said the “pops” Nelson heard were fireworks. He added that the people found in the house where it happened were 13-year-old boys.

“Any ethnic group, or racial group, or religion that may be threatened in any way, we take that serious regardless of what that may be,” he told WILX-TV. “We are taking this seriously. I feel we have taken the proper steps and the proper investigation was conducted that day to verify exactly what had transpired, and again, it is now in the prosecutor’s hands to review.”

Nelson said that the incident constitutes a hate crime.

She addeh that she is also demanding an apology from the boys and their mothers.

“Frankly, I don’t care about their age because this is a serious matter and they need to learn their lesson,” she said.

Nelson will seek justice in the court system, said Amy Doukoure of the Council on American-Islamic Relations (CAIR-MI).

“We have a system in which juvenile offenders are dealt with in a manner that is different from adult offenders,” Doukoure said. “We’re not asking that they be charged as an adult but we are asking that these children have some consequences for their actions.”

The case is now being handled by the Jackson County Prosecutor’s Office.