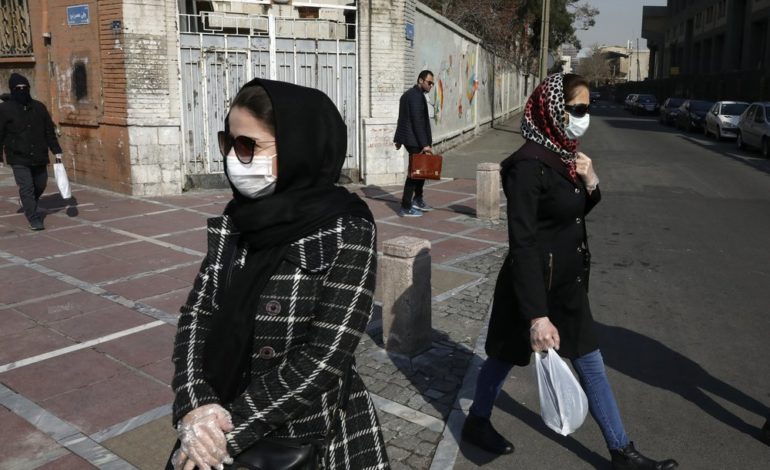 This AP photo shows pedestrians in Tehran wearing masks and gloves to avoid being infected during the coronavirus outbreak in Iran.

DUBAI – Coronavirus cases have now been confirmed in at least nine countries in the Middle East, with the largest number of deaths in Iran, and six countries reporting first infections this past week.

The United Arab Emirates (UAE) was the first country in the Middle East to report a confirmed case of the virus, officially known as COVID-19, which has now spread to 60 countries and regions worldwide and has killed at least 2,800 people. There are now more than 84,000 global cases of infections in every continent except Antarctica.

The World Health Organization (WHO) has called the spread of the virus to the Middle East a “deeply concerning” development. Some experts are worried that under-resourced health-care systems in some countries may prevent their governments from properly handling the outbreak.

The virus causes mild disease in four out of five infected people, but can be fatal for the elderly and those with underlying health conditions such as heart disease and diabetes. There is no vaccine for the virus as yet.

Egypt and Iran both reported cases last week, with Iran reporting hundreds of infections and 15 deaths. Lebanon confirmed its first infection of the virus on Feb. 21 in a 45-year-old woman who was returning home from Iran. Israel reported its first case the same day.

Kuwait, Bahrain, Iraq and Oman all reported their first cases on Feb. 24. Reporting agencies said all patients in these countries had been in Iran before being infected.

The UAE also said its latest infections were an Iranian tourist and his wife. Its first reported case was that of four members of a Chinese family from the city of Wuhan, which experts have declared the epicenter of the virus. The WHO has warned that countries with close travel links to Iran are now at immediate risk, including those that border Iran and have large Shi’a communities.

Iran’s holy city of Qom has reported the most infections, which may be linked to holy sights visited by millions of devout Shia’s from other Middle Eastern countries. Iranian authorities have responded to the urgency of the situation. Neighbors like Turkey and Pakistan have closed their borders with the country. Those in Iran who have contracted the virus include Vice President Masoumeh Ebtekar.

The WHO has called on nations to work cooperatively to contain the virus and governments to be honest to their citizens about the severity of the outbreak. The organization is optimistic however that 2012’s outbreak of the Middle East respiratory syndrome (MERS) has prepared health facilities in the region to manage the spread of infections in hospitals.

On Thursday, Saudi Arabia closed off the holiest of sites for Muslims across the world, closing off  foreign pilgrimages to Mecca and Medina. Though there have been no confirmed cases of the virus in Saudi Arabia, infected Saudis are undergoing care in neighboring Bahrain. People wearing masks after the coronavirus outbreak wait in a line to buy masks in front of a department store in Seoul, South Korea, February 28. REUTERS

The world prepared for a coronavirus pandemic on Friday as hopes the disease could be contained to China vanished and investors dumped equities in expectation of a global recession.

Share prices were on track for the worst week since the global financial crisis in 2008 as virus-related disruptions to international travel and supply chains fueled fears of recession in the United States and the Euro zone.

But with countries other than China now accounting for about three quarters of new infections, World Health Organization (WHO) Director General Tedros Adhanom Ghebreyesus said all nations should prepare.

“This virus has pandemic potential,” Tedros said in Geneva on Thursday. “This is not a time for fear. This is a time for taking action to prevent infection and save lives now.”

A Reuters tally showed about 12 countries had reported their first virus cases in past 24 hours, including the first case in sub-Saharan Africa — that of an Italian man in Nigeria — as well as New Zealand and Lithuania.

Ratings agency Moody’s said a coronavirus pandemic would trigger global and U.S. recessions in the first half of the year.

Michigan asks some residents to self-quarantine

Michigan has asked 357 people who have recently traveled to China to quarantine themselves for 14 days at any one time. None of the travelers have shown any signs of infection and six in West Michigan have been cleared already.

“The highly contagious and rapidly spreading coronavirus outbreak is a serious threat to our public health and safety” the statement said. “As ranking member of the Senate Homeland Security and Governmental Affairs Committee, I continue to press the administration to take decisive action.

”Having the right resources in this emergency is critical, and I am concerned that the administration’s request for additional funds is not sufficient to effectively protect Michiganders and Americans from this deadly virus.”