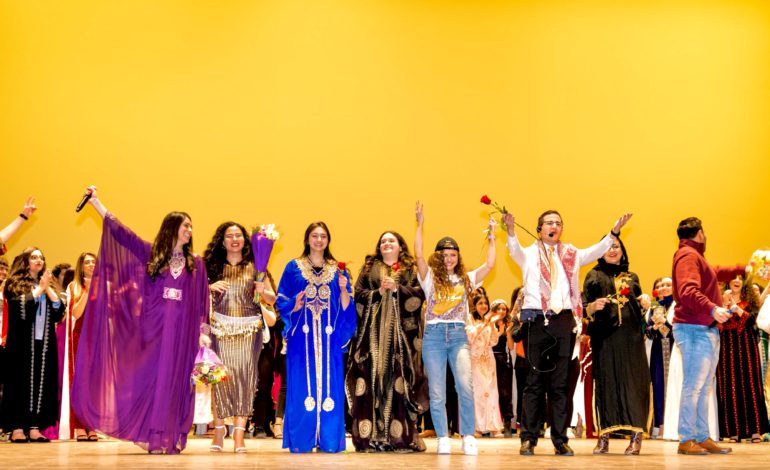 ANN ARBOR — Nearly 1,400 students, faculty and community members attended the 2020 edition of Arab Xpressions on Saturday, February 15, at the Power Center for the Performing Arts here, supporting the University of Michigan’s annual showcase of Arabic culture.

The event, organized by the Arab Student Association, featured a wide variety of cultural performances, special guests and more.

“I think this year’s show was very successful,” said Arab Xpressions Director Marina Khreizat, a sophomore and Lebanese American. “It was a full house and overall it seemed like everyone enjoyed the show. The demand for the show this year was high.”

The cultures of all 22 Arab countries were represented as part of the show, which included everything from traditional dabke dance performances and belly dances to North African-style musical performances.

Khreizat first learned about the show through the SALAM (Successful Arab Leaders at Michigan) welcome program upon her arrival on campus, which is a partnership between the ASA and the Office of Multi-Ethnic Students Affairs (MESA). Lasting four days, its aim is to help incoming and transfer students to build community, learn about campus resources and to connect with one another for learning about the student experience from an Arab perspective.

The program is open to all university students interested in understanding and supporting the Arab community on campus.

“It inspired me to want to be a leader on campus representing the Arab community,” Khreizat said.

During her time on campus, she and her fellow students have realized just how diverse Arabs really are, both at home and abroad. Students come to the university from places as close as Dearborn and Ann Arbor, to all the way across the world.

It all came together on the big stage for Saturday night’s show.

“People come to Michigan and realize how broad the Arab identity is; it opens up a lot of people’s minds to understand it is very diverse and each individual has a unique and different perspective.”

At the event, hosts Jad Elharake and Haleemah Aqel introduced the evening’s acts, while also voicing their appreciation of the passage of the #UMDivest resolution by the university’s Central Student Government for the first time in history, according to a report from The Michigan Daily.

The resolution passed in November, during which time the student government called for the University’s Board of Regents to investigate three companies allegedly involved in human rights violations toward Palestinians.

“After 15 years and 11 attempts, University of Michigan’s Central Student Government finally passes a resolution to investigate into companies who fund governments that commit human rights violations,” Elharake said, according to the Daily. “And it just so happens to be that it is against the Palestinian community.”

Other segments included video skits poking fun at Arab culture and the more humorous aspects of being Arab at the University of Michigan. Poetry and student talents were also featured.

“It is such a privilege to watch how this Arab American community has blossomed,” El-Sayed said. “So much of what brings us to the table today is asking about how it is that we can contribute to the social fabric that makes us Americans to begin with.”

A fashion show featuring clothing from all 22 Arab countries took place at the conclusion of the event.

“People were really blown away at how diverse the Arab culture is,” Khreizat said about the show.

In addition to Arab Xpressions, the Arab Student Association is hosting the 2020 Arab National Conference from March 20-22 on campus.

More information can be found at https://www.ancumich.com.