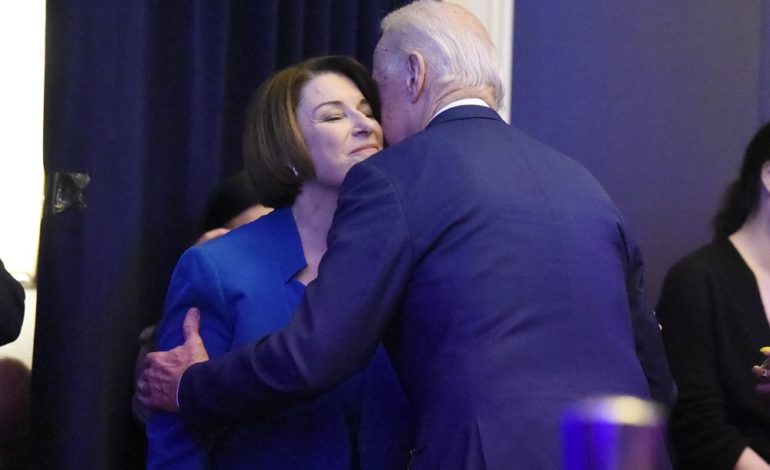 DALLAS — The campaign for U.S. Sen. Amy Klobuchar (D-MN) announced that she will be ending her 2020 Democratic presidential candidate bid and will formally endorse former Vice President Joe Biden at a rally in Dallas, Texas on Monday. Klobuchar is now the third candidate to drop out of the race in a week, following South Bend, Indiana Mayor Pete Buttigieg and billionaire Tom Steyer.

After Biden’s noticeable victory in Saturday’s South Carolina primary, so-called moderate Democrats like Klobuchar and Buttigieg are now set to throw their support behind the establishment candidate, with Buttigieg also announcing that he plans to endorse Biden on Monday.

With these high-profile endorsements and his support from middle-class and wealthy minority Democrats in South Carolina, Biden is set to be a stronger challenge to front runner U.S Senator Bernie Sanders (I-VT) ahead of the Super Tuesday contest, in which nearly one-third — 1,357 — of the 1,991 of delegates needed to clench the nomination will be in play.

Billionaire and former New York Mayor Michael Bloomberg will make his first appearance on the primary ballot on Tuesday and has dumped hundreds of millions of dollars to promote his campaign in many of the states contested in that race. Five Democratic contenders now remain.

Neither Biden nor his supporters Klobuchar and Buttigieg seem to resonate significantly with Arab American voters in Dearborn and Dearborn Heights. Both Bloomberg and Sanders have opened campaign offices in the area and have courted the community through public meetings with its members at The Arab American News offices last month.

Sander’s recently announced that he will not be attending the pro-Israeli American Israel Public Affairs Committee (AIPAC) annual conference this month, calling it a platform for bigotry. Several attendees of a public lecture by the renowned Palestine scholar Rashid Khalidi in Dearborn drew supporters of Sanders, who proclaimed, along with the professor, that he is the only candidate who can shift U.S. foreign policy away from supporting Israeli apartheid.