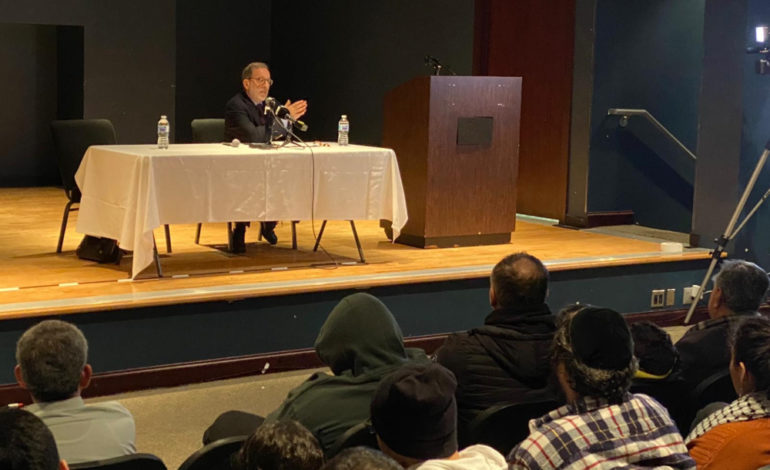 DEARBORN — Columbia professor Rashid Khalidi visited the Arab American National Museum in Dearborn on Wednesday, Feb. 26, on the occasion of his seventh book, “The Hundred Years’ War on Palestine.” The talk was timed serendipitously with the Trump administration’s new Mid-East peace plan, unveiled last month, as well as the impending presidential primary election in Michigan.

A sizeable audience braved freezing weather to hear the world’s premier historic authority on Palestine speak about the settler-colonial, Zionist project that is the state of Israel, its historic occupation and expropriation of Palestinians and their land, erasure of their cultural identity and other relevant contemporary issues concerning the region. The event was hosted by the Al-Nadwa Free Thinking Society.

Khalidi also spoke of the importance of upcoming elections in the U.S. and its implications for the Palestinian struggle. He wholeheartedly endorsed candidate Bernie Sanders, a popular choice among many Palestine activists in Dearborn, but put more focus on pro-Palestinian movements on college campuses and general economic strategies like divestment that combat Israeli apartheid.

“No cause of our world is as central to global social justice as the Palestinian struggle for identity, statehood and freedom,” said Al-Nadwa co-founder and secretary Dr. Abbas Youssef in presenting the night’s speakers.

Retired Wayne State University professor and Middle East historian May Seikaly introduced her friend Khalidi, with whom she shared a mentor in the prominent scholar Albert Hourani, and spoke to the importance of his work and career.

“(Khalidi’s) publications have covered the wide range of Arab history, with sharp precision, on the roots of the colonial experiment in our region,” Seikaly said. “He nevertheless concentrated various books on the encounter between Western and U.S. foreign policies and Palestine.” Columbia professor and author of “The Hundred Years’ War on Palestine”, Rashid Khalidi

Khalidi said he wrote his latest book for the general reader, who may not have much knowledge of the history of what some call the “Palestine question.” He mixes scholarly work with ruminations of his ancestral land based on family history and personal experiences.

The central argument in Khalidi’s new book is that a war has been waged over the last century on Palestinians, the country’s indigenous population, a war that aimed to establish a settler colonial project in their midst and to ultimately replace them in their own land.

“This is a very different interpretation than the tragic struggle between two peoples (as the issue is commonly viewed),” he said. “This is a war on Palestine, not a war in Palestine.”

Khalidi argues in the book that this war was launched not just by the Zionist movement and Israel, but by different great powers, mainly including Great Britain, the U.S., the Soviet Union and France. These powers directly supported a growing settler colonial project in which previously persecuted Jewish people from primarily Eastern Europe sought to establish an independent Jewish state in Palestine, making this particular project unique as the settlers did not find themselves establishing an extension of their motherland.

“To say that this is a (settler colonial) movement is not some ideological argument or a kind of anti-Semitic slander against Zionism. They called themselves settlers, they called themselves colonialists for the first several decades of the Zionist project. — Rashid Khalidi

“(This project) had its own independent financial resources,” Khalidi said. “An Israeli historian has shown that capital inflows to the Zionist movement in Palestine in the 1920s was 140 percent larger than the gross national product of the Jewish sector of the economy.”

The fact that powerful forces aligned themselves with and stood behind the Zionist project in Palestine speaks to the historic reality of settler colonialism and its lasting affects in the country. Khalidi made sure to clarify that the label of settler colonialism is not to be confused as some reflexive or pejorative term.

“To say that this is a (settler colonial) movement is not some ideological argument or a kind of anti-Semitic slander against Zionism,” Khalidi said. “They called themselves settlers, they called themselves colonialists for the first several decades of the Zionist project.”

Many more topics were covered in the almost two hour event, which ended with an energized question and answer session with local activists and students. Readers are encouraged to view the lecture in its entirety through the Al-Nadwa Free Thinking Society Facebook page. Khalidi’s book “The Hundred Years’ War on Palestine” is available through all major retailers or through its publisher, Macmillan.