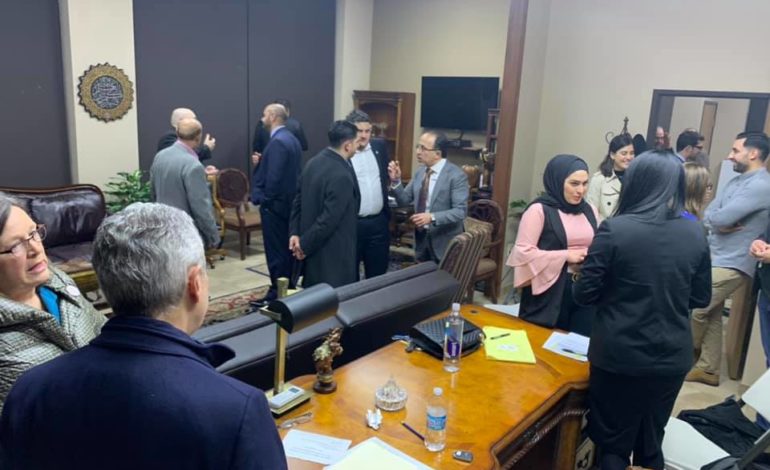 AAPAC members during their meeting on March 4. Photo by The Arab American News

AAPAC, a major political group in Michigan, was established in 1998. The organization also voted unanimously to endorse the Crestwood Public School renewal bond that will be on the ballot on March 10.

The meeting included a call-in from U.S. Rep. Rashida Tlaib (D-Detroit), a strong Sanders supporter who told the group that Sanders is as genuinely concerned about the issues he discusses in private as he is in public, many of which are of the utmost importance to Arab and Muslim Americans.

“He’s the real deal and doesn’t say anything different behind closed doors, he means what he says,” Tlaib said via phone to assembled AAPAC members.

Tlaib tweeted the news to more than 936,000 followers.

“Let’s get it done Michigan!”

The Arab American News Publisher and AAPAC co-founder Osama Siblani introduced a motion to support Sanders at the meeting, mostly a formality considering the unanimous support the senator had received from the group’s members leading up to his selection.

“If somebody saw Bernie at 18 years old and now 78, he’s still the same person with the same principles on the same issues, and that to me is something to be admired,” Siblani said.

Fellow AAPAC founder and attorney Abed Hammoud encouraged the members to consider candidates based on their merits and platforms rather than backing a candidate simply because of the perception that the Democratic establishment seems to be against him as some in the Arab American community have suggested.

Among the biggest issues facing Arab Americans are the “terrorist watch list” that has ensnared hundreds of thousands of people, mostly Arab and Muslim Americans; harassment at the borders and at national airports, civil rights and discrimination issues in the Donald Trump era and foreign policy, especially the United States’ heavy-handed policy against Arab countries, in particular occupied Palestine.

Wayne County Commissioner Sam Baydoun, who had not previously supported any candidates, spoke strongly in favor of Sanders before voting for him at the meeting.

“It is in the best interest of the community to stand with the man who stands with us,” Baydoun said of Sanders, who has consistently been on the right side of the many issues affecting Arab Americans and has often spoken out on them with an uncommon passion and fervor.

“I believe Bernie Sanders,”Baydoun added. “He spoke our language, took our position and he is the only one who spoke against the injustice of the Palestinians and in the best interest of this community.”

While the choice of Sanders was never in doubt, discussion centered around former Vice President Joe Biden’s relationship with the community as well.

Biden met with local Muslim religious leaders this past summer in addition to Detroit Mayor Mike Duggan, but numerous AAPAC members including Siblani said he has not done nearly enough to reach out to the community.

Representatives from the Biden campaign met with community activists and local leaders including AAPAC leaders following the AAPAC meeting.

Amer Zahr, a surrogate for the Sanders campaign, addressed a key issue regarding Sanders’ chances to defeat President Trump in November should he obtain the Democratic nomination.

Biden gained ground in the race for the nomination during Super Tuesday’s primary elections despite lukewarm support at best from prospective voters across the country compared with Sanders’ second consecutive sweeping and highly energized populist movement.

“This moderate way of trying to win the presidency hasn’t worked,” Zahr said.

“In 2000 Al Gore was the moderate darling, he lost; in 2004 it was John Kerry…in 2016 Hillary lost, so it’s not like this moderate oligarchist (movement) has not had a good track record recently of winning the White House.”

The millage, which also was endorsed, would levy 3 mills (taxed on non-homestead properties) should Dearborn Heights Crestwood Schools fall below 18 mills due to the Headlee rollback, a previous amendment within the state that could allow for cuts at some point, although in this case they are not likely.

The vote was attended by Crestwood Schools Superintendent Dr. Youssef Mosallam, among others.

The money is currently being used to fund the district’s Robotics Team and Program, and is a renewal, not a new tax.