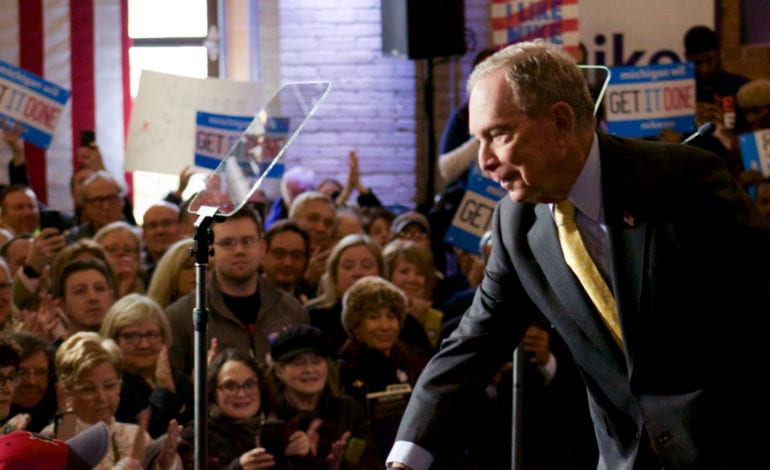 Bloomberg shakes hands at a campaign rally in Detroit’s Eastern market in February. After Super Tuesday’s dismal results, Bloomberg has announced he is suspending his campaign and endorsing Joe Biden as the Democratic presidential nominee. File photo.

NEW YORK — Former New York Mayor and 2020 Democratic candidate Michael Bloomberg announced Wednesday that he is suspending his campaign and throwing support behind former Vice President Joe Biden. Bloomberg, who had funded his campaign with millions of dollars of his own money, said that after Super Tuesday’s dismal performance, he had no way to secure a stable position as a nominee in this year’s primaries.

“I’m a believer in using data to inform decisions,” Bloomberg said in a statement. “After yesterday’s results, the delegate math has become virtually impossible – and a viable path to the nomination no longer exists.

“But I remain clear-eyed about my overriding objective: Victory in November. Not for me, but for our country. And so while I will not be the nominee, I will not walk away from the most important political fight of my life.”

Biden’s campaign received a much need surge after his win in the South Carolina primaries last weekend, followed by other candidates being urged by the Democratic establishment to pool their support behind the former vice president. Super Tuesday results added wind to the campaign’s sails, with Biden winning big in many key southern states, clenching major delegate numbers in states like Texas, but also doing well in Massachusetts.

“I’ve known Joe for a very long time,” Bloomberg said. “I know his decency, his honesty and his commitment to the issues that are so important to our country — including gun safety, health care, climate change and good jobs.

“I’ve had the chance to work with Joe on those issues over the years, and Joe has fought for working people his whole life. Today I am glad to endorse him — and I will work to make him the next president of the United States.I am immensely proud of the campaign we ran, the issues we raised and the sweeping and achievable plans we proposed – including our Greenwood Initiative to right historic wrongs, fight racial inequality and make the promise of equal opportunity real for the Black communities that have endured centuries of exploitation and discrimination. That work is fundamental to the future of our country – and to the more perfect union that each generation is called to build.”

Bloomberg had staked his candidacy on Super Tuesday after coming in late in the primary game, a plan jeopardized by Biden’s resurgence. He previously had to defend himself or make apologies for a history of racist policies in New York, as the specter of “stop-and-frisk” loomed on his candidacy, and came under attack for attempting to silence former female employees accusing him of sexual harassment.

Bloomberg has promised to keep paying his substantial staff through November to keep working to support whoever becomes the Democrat’s presidential nominee. He became favorable among many voters in Metro Detroit, including Arab Americans in Dearborn, after aggressively campaigning in the region.