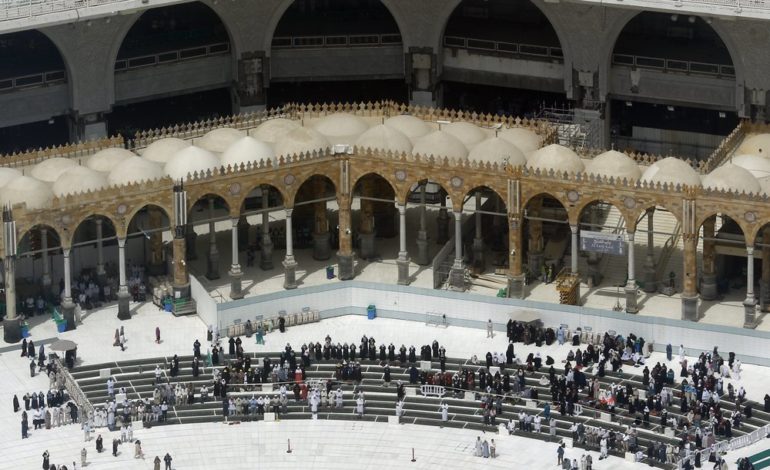 A Wednesday AP photo shows a relatively few number of Muslims praying at the Grand Mosque in Mecca. Saudi Arabia has now extended its restriction on umrah pilgrimages to Saudi citizens and residents.

RIYADH –  Saudi Arabia has extended its suspension of travel to the holy sites of Mecca and Medina from foreigners to Saudi citizens and residents, after it reported its first case of the novel coronavirus in an individual who failed to disclose he had travelled to Iran before entering the country.

“Based on the recommendations of the committee appointed to monitor coronavirus…it has been decided to suspend umrah for citizens and residents in the kingdom,” the Saudi news agency SPA said, citing an official source in the Saudi interior ministry.

Umrah is separate from haj, which is the annual week-long religious event that brings some two million followers to the holy city of Mecca. Umrah pilgrimages are carried out throughout the year in holy cities in the country. Haj is to begin in July of this year, putting the prospects of travel to the country in midst of the global outbreak of the virus under jeopardy. Pilgrimages to holy sites also accelerates during Ramadan, which will begin in late April.

Reuters reports deputy haj minister Abdulfattah Mashat told Al Arabiya TV on Wednesday that Saudis and residents can still visit Mecca and Medina and pray there, provided they do not go for the purpose of umrah.

“Mecca is still open to visitors from across the kingdom, the decision suspends only umrah activities,” he said.

TEHRAN – President Hassan Rouhani said in a cabinet meeting on Wednesday that the coronavirus has spread to almost all of Iran’s provinces, though he believes the country will come out the other side of the pandemic with a “minimum” number of deaths.

“This disease is a widespread disease,” he said, according to the president’s official website. “It has reached almost all our provinces and in one sense it’s a global disease.”

92 people have died from the virus, one of the highest death tolls outside of China where the virus originally broke out. Iran’s health ministry says 2,922 people have been infected in the country. To add to the seriousness of the situations, several Iranian officials have succumbed to the virus, with one senior official dying from an infection on Monday.

Rouhani seems confident in his country’s response to the virus, saying that the country’s doctors and nurses would ensure that Iran will get through the outbreak in a short period with minimum deaths. The president said U.S. sanctions have blocked much needed medicines from entering the country, though U.S. officials have denied it targets medicines in its sanctions.

Other Middle East countries have reported the infection in those individuals who have traveled to Iran, with Oman and Bahrain each reporting three new cases this week.