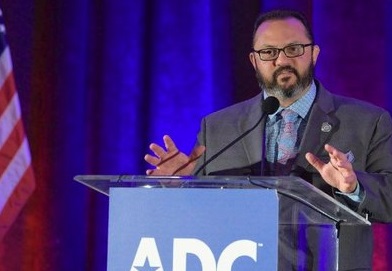 WASHINGTON, D.C. — American-Arab Anti-Discrimination Committee President Samer Khalaf announced that he will be transitioning out of his role in an email Wednesday.

He thanked the organization, which was founded in 1980, and the community for their support during his time as president.

“During my tenure as president, ADC has reconnected with its core mission — protecting the rights of Arab Americans and uplifting our rich culture and heritage,” he said.

“ADC has recommitted itself to its legal roots, and the organization is now on the leading fronts of community legal and policy work.

“We have also made strides in rebuilding our chapters and grassroots presence across the country. I believe I have completed most if not all of what I set out to do when I started.”

Khalaf, an attorney, began at ADC more than 20 years ago as an intern, and said that the organization will always remain in his heart and mind. He also agreed to continue his service to the ADC as a member of the National Board of Directors in the near future.

“I took the role during what was a challenging time for the organization and community,” he said. “ADC was facing great obstacles, and I knew the work would be difficult, but I would not shy away from the challenges.”

Khalaf became president more than seven years ago and said that he made the decision “with both great sadness and excitement.” He thanked the organization’s staff and volunteers, along with ADC chapters and members across the country for their support in his farewell letter.

The search for the new president will be undertaken by a committee comprised of members from the ADC National Board, the organization said in a press release. Those interested in more information about the position may contact ADC Board Chairman Dr. Safa Rifka at chairman@adc.org.