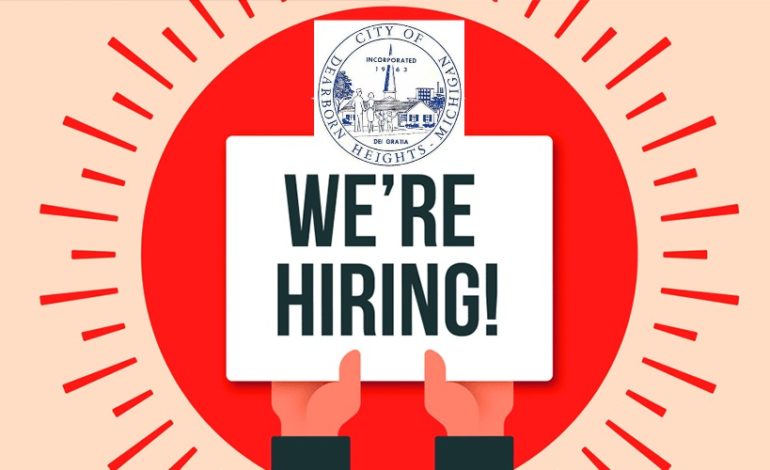 A letter of interest and resume must be received in the Human Resource Department no later than 3 p.m. on March 11. Image courtesy: City of Dearborn Heights

DEARBORN HEIGHTS — Qualified individuals from the Dearborn Heights community are encouraged to submit their letters of interest and resumes for the soon to be vacant city Treasurer position. The city’s current treasurer, John Riley, announced his retirement in December, after serving in the position for 26 years. His retirement takes effect April 30.

Dearborn Heights’ City Charter, Section 4.5, lays out guidelines for how a position for elective office is filled if the position becomes vacant before elections for that position. Such vacancy is filled by a majority of the City Council, who appoints a qualified person until the next general city, state or national election fills the vacancy and the individual’s successor is elected and qualified.

The next general election will take place on Tuesday, Nov. 3.

An applicant has to be a 2-year resident of the city and a registered voter to be considered a candidate for the position. Anyone interested will submit a letter of interest stating why they should be considered for the appointment and a resume detailing educational and professional background and public service experience.

The city says that all material submitted will be treated with confidentiality, though documents received from the person eventually selected may become public. Evaluation will consist of a maximum five-minute presentation by the applicant to the Council at a meeting scheduled for 6 p.m. on March 17 at City Hall, 6045 Fenton.

A vote will be taken at the regular Council meeting at 7 p.m. on March 24.

The letter of interest and resume must be received in the Human Resource Department no later than 3 p.m. on March 11. The department is open to the public Monday through Thursday, from 8 a.m. until 5 p.m. All letters of interest/resumes are acknowledged by the Human Resource Department within 72 hours of receipt. If an applicant does not receive such acknowledgement, they should call the office directly at 313-791-3420.

A full list of responsibilities of the Dearborn Heights City Treasurer can be found on the city’s website at: //www.ci.dearborn-heights.mi.us/residents/employeement_opportunities.php

Compensation for the position is $76,513 annually with full benefits, including medical, dental, vision and life insurance after 90 days of full-time employment.