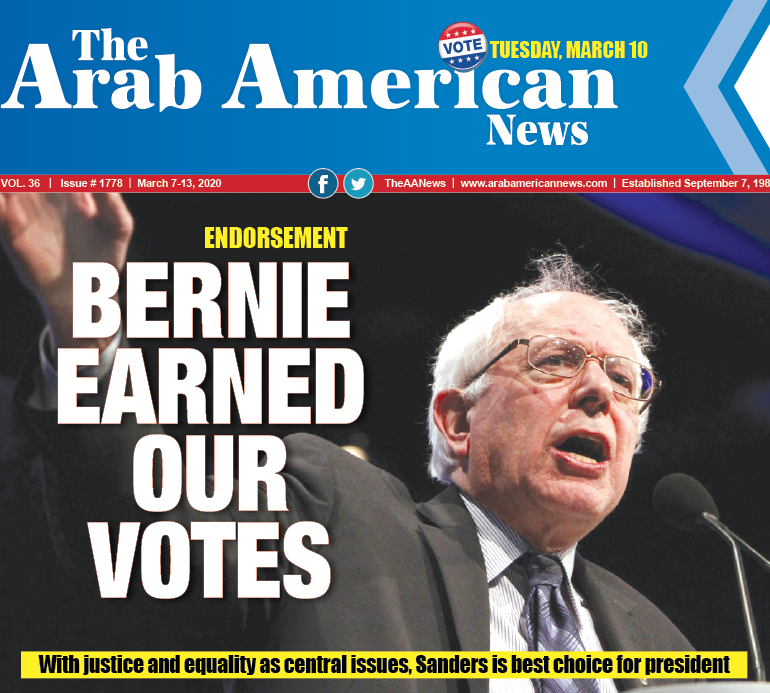 Bernie Sanders is our choice

As of Thursday, there are now three candidates vying for the position of 2020 Democratic presidential nominee and on March 10, Democratic voters in Michigan will decide which of these candidates they want to lead the nation in the White House. The Arab American News has been fortunate enough to be the community’s voice for more than 35 years and has researched and presented many issues important to it during this time. We believe that Bernie Sanders’ campaign and proposals most closely align with the interests of the community at large. After our meeting last month, we are in continuing talks with the campaign on more systematic issues like the “terror watch list” that has plagued innocent and law-abiding members of our community for too long.

Bernie Sanders has consistently been at the forefront of the fights for social justice, climate awareness, racial equality, workers’ rights and universal health care. As Arab Americans, we care deeply about these issues that affect every American. We share Senator Sanders’ maxims of protecting the weakest in our society and we believe he has held the most steady and principled positions in this regard. His core motto of “Not Me, Us” is as central to Arab American culture as it is to his campaign.

Arab Americans also hold interests unique to us. Electing a president who advocates a foreign policy based on justice and equality is of paramount concern to us. Sanders has garnered much acclaim for saying that American policy must not simply be just pro-Israel, but that “we must be pro-Palestinian as well.” He has repeatedly stated that Palestinians must be treated with “respect and dignity” and he has frequently highlighted the disastrous humanitarian situation in Gaza as untenable. While Senator Sanders doesn’t say everything we’d like him to say on the Palestinian issue, he fundamentally changes the conversation and moves it in a positive direction. We believe that Bernie Sanders’ campaign and proposals most closely align with the interests of the community at large. On March 10 vote for Bernie.

Further, Senator Sanders led the effort to pass legislation to end American funding of the Saudi-led war against Yemen, which Sanders labeled “a humanitarian and a strategic disaster.” According to international humanitarian agencies, more than 85,000 Yemeni children have died of starvation as a result of this war. Unfortunately, this landmark bill was vetoed by President Trump.

Senator Sanders has stood against anti-BDS bills, which seek to stifle free speech and disproportionately target Arab Americans, including S.1., which passed last year. That legislation sought to protect state and local governments that outlaw contracts with entities or individuals who favor boycotts of Israel. Sanders has consistently held that BDS rights are protected by the First Amendment of the Constitution.

Additionally, he has spoken out against law enforcement targeting of the Arab American and Muslim American communities:

“The terror no-fly lists are a racist creation from the 9/11 era that denies due process to Americans and should be reformed. Under our current system, marginalized and vulnerable Americans are more likely to be stopped by the police, subjected to excessive force, arrested and jailed than White Americans. And in the wake of 9/11, Muslims were racially and religiously profiled, spied on and illegally detained. Muslim Americans have been subjected to the government’s countering violent extremism (CVE) program, an Islamophobic Muslim ban, unconstitutional terror watchlists and indefinite detention in Guantánamo. A Bernie Sanders presidency will end these abuses once and for all.”

Importantly, Bernie Sanders has stood up for those in our own community. When Rashida Tlaib and Ilhan Omar are constantly attacked by Islamophobes and anti-Arab racists, Sanders consistently defends them. When Tlaib and Omar were banned from visiting occupied Palestine last year, Sanders stated, “If Israel doesn’t want members of the United States Congress to visit their country… maybe they can respectfully decline billions of dollars.”

In 2018, Sanders endorsed Abdul El-Sayed, a serious gubernatorial candidate who inspired hundreds of thousands of Michiganders with his campaign and energy. During this presidential campaign, Palestinian American Sanders’ surrogates Amer Zahr and Linda Sarsour have come under massive fire and accusations of anti-Semitism at every turn. Instead of turning his back on them, the Sanders campaign has defended their presence in his movement, declaring, “As he campaigns to become the first Jewish president in American history, there are cynical political operators employing racist and Islamophobic tactics to undermine his campaign. We reject this kind of politics and are not going to play that game.”

Sanders has shown the ability to inspire young people, immigrant communities and a multiracial coalition of Latinos, African Americans, Arabs, Muslims, Asians and beyond. He also speaks directly to working people of all backgrounds with authenticity and consistency. We believe this formula provides the best chance to defeat the incumbent president. We fear Joe Biden simply won’t create the inspiration necessary to achieve the same thing.

We strongly encourage all Americans to vote for Bernie Sanders in the Michigan presidential primary on March 10.