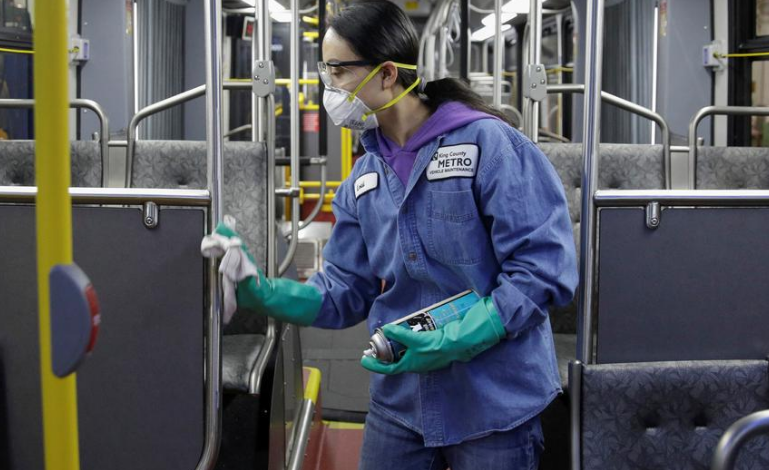 Vehicle Maintenance Utility Service Worker Thiphavanh 'Loui' Thepvongsa wipes down an off-duty bus with a disinfectant during a routine cleaning at the King County Metro Atlantic and Central Base in Seattle, Washington, U.S. March 2. REUTERS/Jason Redmond

WASHINGTON, D.C. —The United States Senate approved more than $8 billion in funding to fight the coronavirus on Thursday before sending the measure to President Trump, who is expected to sign it.

The virus, known as Covid-19, has been blamed for 11 deaths in the United States — 10 in Washington state and one in California, where a state of emergency was declared afterward. A cruise ship the victim had traveled on was being held offshore in San Francisco as passengers were tested.

Several of those who died in Washington had been residents of a long-term nursing care facility in the Seattle suburb of Kirkland called LifeCare, according to the Seattle & King County Public Health agency.

“We are dealing with the most serious outbreak of Covid-19 anywhere in the nation,” said Dow Constantine, the executive of King County, where the outbreak occurred. Residents were advised to stay indoors and to cancel events that would bring together more than 10 people.

“Our actions are forming the model that will be followed in other parts of the country.”

The state of New York reported 22 confirmed cases on Thursday following an increase in testing, with Governor Andrew Cuomo saying new expanded testing capabilities will likely reveal more cases of infection in his state. Eight new cases are connected to a lawyer in Westchester County, two in New York City and one in Nassau County, according to Reuters.

Overall nearly 97,000 people in 81 countries have been infected with the virus and more than 3,300 people have died worldwide. The vast majority of the deaths and cases have occurred in China, where the outbreak began.

According to the United Nations education agency UNSECO, more than 290 million children were out of school around the world due to closures in more than 20 countries.

“This is not a drill,” World Health Organization Director-General Tedros Adhanom Ghebreyesus said Thursday about the growing response to the virus. “This is not the time to give up. This is not a time for excuses. This is a time for pulling out all the stops.”

The United States has promised about 1.5 million test kits, according to Vice President Mike Pence.

“We have more than 2,500 kits that are being distributed around the country this week that will make more than 1.5 million tests available at hospitals that have requested them, and in areas of the country that have been particularly impacted by the coronavirus,” Pence said during a meeting Wednesday with diagnostic lab CEOs according to NBC News.

Coronavirus not yet recorded in Michigan

Meanwhile, the state of Michigan doubled its own capacity for testing for the virus on Thursday according to a report from the Detroit Free Press.

The Department of Health and Human Services received a batch of new test kits from the U.S. Centers for Disease Control and Prevention that will allow it to test hundreds of Michiganders for the virus.

In response to news of the virus, universities in Michigan have taken precautions. Oakland University created a task force that met on Wednesday while the University of Michigan placed CDC level 3 travel restrictions on countries where the coronavirus is ubiquitous, including China, South Korea, Iran and Italy, according to Fox 2 News.

All future study abroad trips scheduled to leave this semester were cancelled by Central Michigan University as well, while Wayne State University enacted a committee and canceled all spring break trips.

Hassan Abbas contributed to this report.