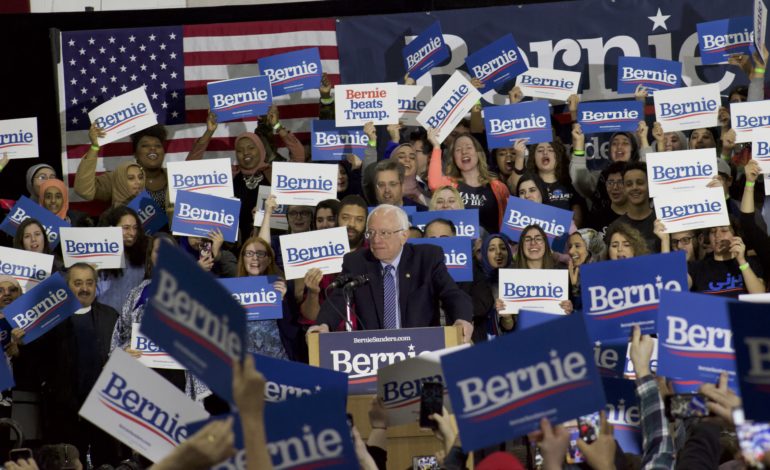 DEARBORN –  As electoral efforts ramp up in Michigan ahead of the March 10 primaries, 2020 Democratic presidential candidate Bernie Sanders’ campaign organized key stops in the state over the weekend. In Dearborn’s south-end on Saturday, “Amo Bernie”, as he is affectionately known amongst his Arab American supporters, spoke to an energized crowd of supporters at Salina Intermediate School.

Among his usual critique of wealthy corporations and promises of justice and equality for working people, Sanders spoke of the history of the auto industry in the state and his policy proposals towards holding companies responsible for impacts on communities like Dearborn. Fighting racism, discrimination and a celebration of the youth and diversity of his voting base were also central topics.

He told supporters that both he and his main opponent Joe Biden are willing to support each other no matter the outcome of the primary election. He also mentioned that he remained confident Michigan would pick him over President Trump in November, dispelling certain opinions on his electability.

“We are now in a moment where we have in the Democratic primary process a two person race, that’s what we’ve got, Joe Biden and myself,” Sanders said. “And all over the country people are asking themselves which candidate can best defeat Trump.

“I have no doubt in my mind that we are the campaign that can beat Trump. We cannot defeat Trump with the (same old type) of politics. To beat Trump we need the largest voter turnout in the history of the United States of America.”

Sanders spoke of his history of opposition to U.S. foreign policy blunders and decades-long military and political endeavors in the Middle East, like the most recent war in Iraq, which Biden voted for. He also mentioned Biden’s support of Wall Street bailouts after the economic crisis of 2008.

Sanders honed in on certain Michigan-centric issues, like the threat of environmental disaster posed by the Enbridge Line 5 oil pipeline.

“This is a pipeline that has leaked oil at least 33 times, spilling over 1 million gallons of crude oil into Michigan’s environment, enough is enough,” he said. “So I say to Governor Whitmer, building a tunnel for Enbridge Line 5 through the Straits of Mackinac will not protect the environment or combat climate change, the time has come to decommission the Line 5 pipeline.”

Whitmer has recently declared her endorsement of Biden. Sanders backed her gubernatorial opponent Abdul El-Sayed, who spoke at the rally along with other community notables, in 2018. Sanders drew a line between himself and Biden, mentioning the former vice president’s reliance on billionaire super PAC support. Biden has recently utilized this funding support to go on attack against Sanders in television ad campaigns.

He also spoke of his history of opposition to U.S. foreign policy blunders and decades-long military and political endeavors in the Middle East, like the most recent war in Iraq, which Biden voted for. He also mentioned Biden’s support of Wall Street bailouts after the economic crisis of 2008.

Along with Sayed, State Rep. Abdullah Hammoud (D-Dearborn), former state senate electoral candidate Abraham Aiyash, and Sanders campaign surrogate and Palestine activist Amer Zahr joined other community members to speak at the rally. Hammoud has previously criticized AK Steel, whose factory sits next to Salina and is responsible for severe environmental degradation in the south-end of Dearborn.

Wayne County Commissioner Sam Baydoun and U.S Rep. Debbie Dingell (D-Dearborn) were also in attendance, along with Dearborn Heights City Councilman Dave Abdullah, who also canvassed for Sanders on Saturday. Sanders also appeared at a Flint town-hall on Saturday and a rally in Detroit on Friday. He spoke in Grand Rapids on Sunday morning and has a rally scheduled for 6 p.m. in Ann Arbor the same day.