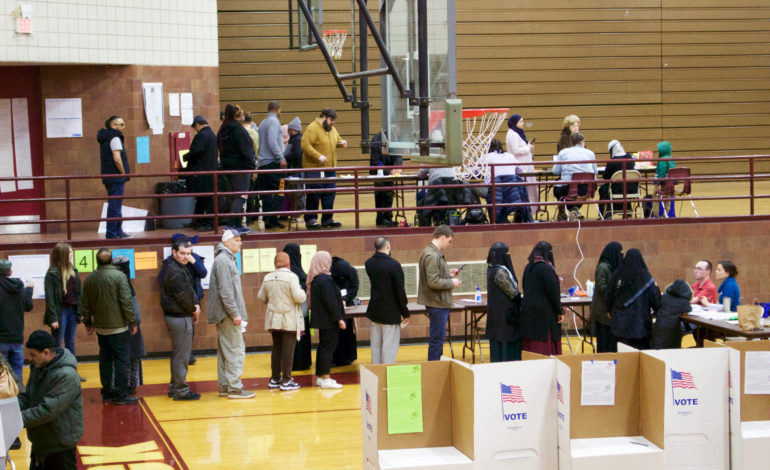 Voters in in the heavily Arab and Muslim populated city of Hamtramck line up at a precinct in a community center on Tuesday, March 10 during the Michigan's primary elections. Photos: Hassan Abbas/The Arab American News

HAMTRAMCK — As of Wednesday evening, election results for the March 10 Michigan presidential primary in key Arab American precincts in Hamtramck, Dearborn and Dearborn Height show Vermont Senator Bernie Sanders to be the overwhelming favorite among voters in the community.

While election results in many of these precincts are still being confirmed and finalized by city clerk offices and Wayne County, unofficial summaries show Sanders to have taken a substantial lead over his main opponent Joe Biden among Arab American voters.

In the heavily Yemeni and Bengali populated Hamtramck, Sanders received 73 percent of the vote over Biden’s 22 percent. 3,548 of 12,841 registered voters participated, a dramatic rise from elections four years ago. Hamtramck City Clerk August Gitschlag told The Arab American News that this was the most registered voters he had seen in six years.

In Dearborn, Arab American voters showed a strong push for the candidate. Unofficial results from the city’s precincts show Sanders decimating Biden, coming out victorious at 63 percent (11,872 votes) over Biden’s 32 percent of total votes. Precincts in the south and east end of the city where Arabs comprise a vast majority of the population came out for Sanders in droves.

Biden won in U.S. Rep Debbie Dingell’s 12th Congressional District by a small margin, but gained a bigger margin (57 to 34 percent) in U.S. Rep. Rashida Tlaib’s 13th district. Biden beat Sanders in Wayne County by a close to 20 percent lead. Voter turnout was below 30 percent in the county. The Detroit Institute of Arts millage proposal received overwhelming support across the county.

At Salina Intermediate School in Dearborn, where the Vermont senator held a rally on Saturday, a small but energetic group of Sanders supporters came out to vote, with most traffic occurring during the afternoon hours. During the evening hours, the mood was subdued and businesslike as Biden began to stake a seemingly insurmountable lead in the early poll results. One Sanders supporter remarked that “Biden was going to win anyway” before quickly exiting the school after casting his vote. In other parts of Dearborn, enthusiasm was high and lines were long as voters scrambled to register.

Rami El-Saleh, 29, of Dearborn, said he attempted to register at 4 p.m. along with his cousin, but was told to come back later and decided to cast his vote for Sanders at McDonald Elementary School in Dearborn. The voting booths were not nearly as packed at 7:45 p.m. as they were during the afternoon, he said, adding that the vast majority of Arab Americans he spoke with planned to vote for Bernie Sanders. A vehicle displays a pro-Sanders sign outside of a campaign office in Hamtramck.

Absentee voting in Hamtramck was drastically down from last year’s City Council elections. Election officials noted voter turnout had ramped up by evening. An election official overlooking three precincts at the Hamtramck Community Center reported some 1,000 votes cast by around 4 p.m., a significantly bigger turnout than previous years for the small city.

Sanders’ campaign office in Hamtramck was busy “getting out the vote out” in the city’s neighborhoods. Canvassers and staff told The Arab American News that many of the city’s Arab American residents were excited about voting for their candidate. Canvassers outside of precincts confirmed strong support for Sanders among Hamtramck voters, no matter their ethnic or racial background.

Just south of Hamtramck, in a heavily Yemeni populated Detroit neighborhood next to the General Motors assembly plant, voters were reportedly turned away all day after being told they were assigned to a different location 20 blocks away. Many of these voters told election officials that the mosque where this polling location was housed was their usual voting place and had not received any notice of a location change. Such changes do occur before elections and Wayne County urges voters to check and confirm their location before voting.

Nick Meyer contributed to this article.